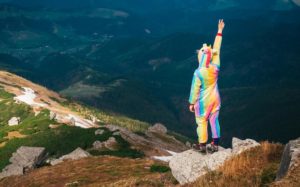 In 2018, hurricanes, floods, fires, and droughts wreaked a level of destruction on the planet that, according to scientists, is just a taste of what is to come. In October, the International Panel on Climate Change issued a report stating that we have about 12 years to avoid catastrophic climate change. Meanwhile, global greenhouse gas emissions reached a record high in 2018. So is it still reasonable to hope that we can wean ourselves off fossil fuels in time to avert global calamity?

As David Roberts of Vox points out, that’s the wrong question. Climate change is happening now, and lots of change for the worse is already locked into place. But, as Roberts puts it, “we have some choice in how screwed we are.” Climate change isn’t a binary—safe or unsafe, screwed or not screwed—but rather a spectrum. That will remain true no matter how we respond to the task of reducing greenhouse gas emissions, or how severe the weather gets. “Yes, it’s going to get worse,” Roberts writes, “but nobody gets to give up hope or stop fighting.” Exactly right. Here, then, are 10 glimmers of hope that humanity will opt for less screwed over more screwed in 2019.