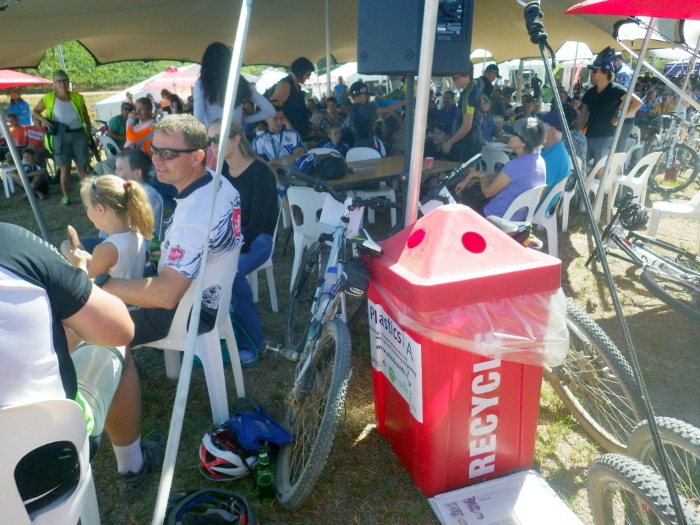 Cyclers and spectators are dropping less waste! This was discovered this month during the annual Cape Town Cycle Tour.

Two teams of clean-up crews recruited from local townships near Ocean View ensured that it was collected for recycling at various water and spectator points, the start and the finish, hospitality part, and refreshment points.

The race also saw the Plastics|SA commemorating their tenth year of involvement under the guidance of their Sustainability Manager John Kieser.

“Our efforts were greatly bolstered by the City of Cape Town who ensured a thorough pre-event clean-up of the main route and the sides of the roads by making use of an incredible collection of various technology driven machinery. It was, however, clear that the riders, sponsors and spectators were more observant than in the past not to litter,” he said.

Learning from previous years’ experience, the Plastics|SA team knew that they had to focus much of their attention on the litter hotspots located at the uphill sections along the route, namely Smitswinkel, Chapman’s Peak and Suikerbossie. However, the use of designated “chuck zones” and friendly rivalry between members of the clean-up teams to see who could collect the most litter, made light work of the day’s efforts.

“This year’s clean-up crews included a fireman, a floor manager at a local hypermarket and a police woman. Their dedication to the job at hand and work ethic made a big difference and definitely rubbed off on the rest of the team members,” Kieser said.

Six truckloads of litter were collected using PETCO’s red bins and transported away for sorting and recycling. The main culprits continue to be plastic energy sachets and decals that were handed out by one of the sponsors.

“The sachets are always a burden as they stick to the road and are easily blown into the bushes. We now also have to contend with the baboons in the Cape Point area who have taken a liking to their sweet contents,” Kieser explained.

The Plastics|SA team was again  in action later this month during the Two Oceans Marathon.

“We are excited about being involved in these big sporting events, as we see it as an ideal opportunity to educate the public and the athletes about the importance of recycling their plastic, and being able to demonstrate practically our commitment to ensuring that plastic litter does not end up in nature or our environment,” Kieser concluded.