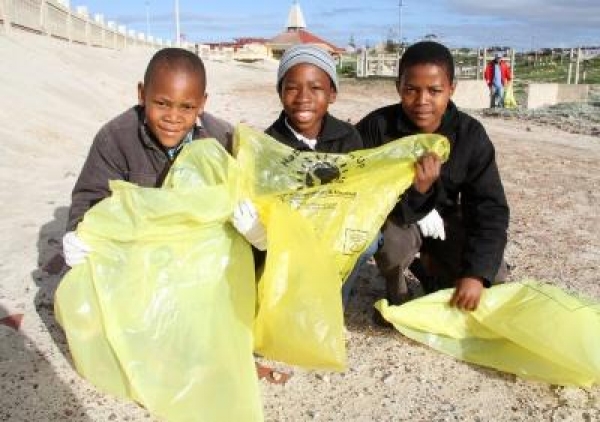 Over 200 school children from Khayalitshe collected nearly 100 bags of rubbish to transform stretches of Monwabisi Beach this weekend as part of the Our School Cares Programme. This is a Peninsula Beverages environmental initiative, in partnership with the Environmental Action Group.  It is the third of eight beach and river clean ups for 2010.

According to Stuart McLeod, MD of Peninsula Beverages, the Our School Cares Programme incorporates the beach clean ups and a sharply contested environmental awareness competition, where schools clean up in their local area.  These initiatives are designed to create an awareness amongst learners of the effect that pollution has on global warming. It is being expanded to include the recycling of beverage containers, such as cans and PET bottles.

“Each child receives a bag, gloves and refreshments and spend the morning combing the beach area to collect waste and rubbish. Some children even found a ship’s anchor rope.”

“We’re hoping to encourage more schools to participate in the project this year as part of their environmental curriculum, which raises the level of awareness of and participation in recycling at school level and the need to nurture our environment,” said McLeod.

“This programme which began in 2004 has expanded annually, with beach clean ups increasing and the number of schools participating in the environmental competition rising too,” he added.

Today environmental awareness forms an integral part of the curriculum of all grades. The Our School Cares programme provides a platform for schools in the Cape Town Metro and adjacent municipalities such as Paarl and Stellenbosch, to enhance their environmental education curriculum work with a practical project that benefits their school and/or community.

Over the last few years examples of projects included:

Prizes to the value of R24 000 will be awarded to schools judged to have optimised their resources for projects (primary and senior) and for schools with the best recycling efforts.

An element introduced to the beach clean ups in 2008 was the data capturing of marine and shoreline debris picked up. This will continue in 2010 and data will again be sent to Ocean Conservancy international.

Collect-A-Can is South Africa’s recycling facility for the collection of cans, and SA is 3rd in the world after the US and Japan. This is one initiative in which Peninsula Beverages is very involved in, as well as Petco, which recycles plastic thereby decreasing waste and creating jobs in South Africa.

Our school cares, does yours? Get involved!