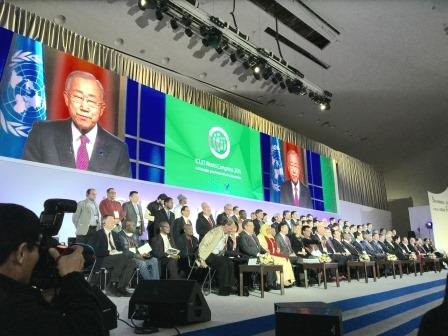 Over 100 Mayors and elected leaders today adopted the “Seoul Declaration”, which sets out how to make cities sustainable.

The Seoul Declaration is one of the major outcomes of the ICLEI World Congress 2015 – the biggest gathering of urban sustainability leaders worldwide.

Gino Van Begin explained: “The Seoul Declaration is a landmark commitment by our Members, our Partners and other local and regional governments to build a clear path to a sustainable urban future.”

He added: “We all recognize that our world is facing a crisis. Our current societies are exploiting the Planet in an unsustainable fashion and we are beginning to face the consequences of climate change. As the global population increases, the need for sustainability will become ever greater. That is why our Members are setting out a vision for sustainable cities.”

UN Secretary-General Ban Ki-moon delivered a message commending Mayor Park Wonsoon for his leadership on urban sustainability. He also expressed his belief that cities would drive a global transformation and encouraged them to strengthen their networks.

A number of Mayors spoke in support of the Seoul Declaration (ES). James Nxumalo, the Mayor of Durban and ICLEI Vice President, welcomed the commitment of the Seoul Declaration to new cooperation initiatives between cities and small island states on adaptation and resilience. Mayor Parks Tau of Johannesburg praised the emphasis on EcoMobility and reminded participants that Johannesburg will host the second EcoMobility World Festival in October 2015, during which the Central Business District of the city will be closed to cars.

Mayor Kinlay Dorjee of Thimphu, Bhutan, described how Bhutan has established a Gross National Happiness index, introducing meditation and the study of green initiatives in schools. Maimunah Mohd Sharif – the Municipal President of Seberang Perai, Malaysia – reiterated her hope for an Urban SDG and invited all cities to scale up best practices to ensure a transformation to global sustainability.

Andrea Reimer of Vancouver´s City Council discussed Vancouver´s plan to become the greenest city on earth by 2020, commenting that “People will embrace significant action when they see significant leadership and they have the tools to act.”

ICLEI President Mayor Park Wonsoon of Seoul remarked: “I am delighted to witness the launch of the Seoul Declaration. Here in Seoul we are pursuing a number of initiatives to radically increase sustainability, including the ‘One Less Nuclear Power Plant’ project, which cuts dependence on fossil fuels. The Seoul Declaration is a major commitment by a huge number of global sustainability leaders to inspire these kinds of initiatives to every city and region, and to work together for a sustainable future.”