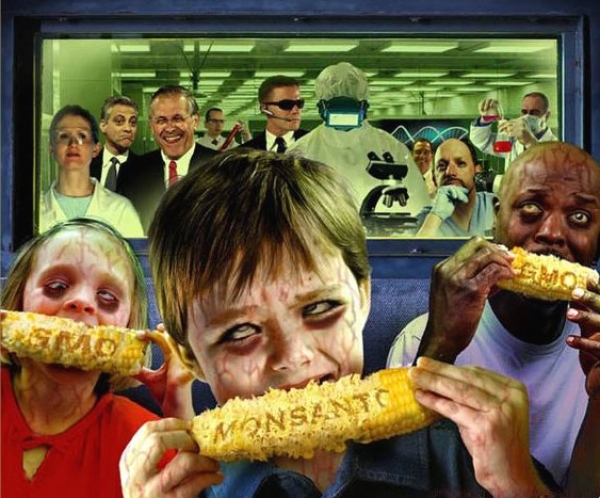 Genetically modified food gets consumed by billions of people across the globe. Please do what this incredible young man did and find out how your food is prepared before supporting a product. If an 11-year-old is brave enough to stand up and talk about this, then the rest of us have no excuse.

Monsanto (affiliated with products such as Nestle, Nabisco, Quaker Oats, etc) genetically dilutes the nutritional content of food. They are one of the top 10 US chemical companies. Their deadly legacy includes the production of herbicides 2,4,5-T, RoundUp, Agent Orange used primarily during the Vietnam War as a defoliant agent (later proven to be highly carcinogenic to any who come into contact with the solution), DDT (banned), PCBs, Dioxin, the artificial sweetener Aspartame (NutraSweet), bovine somatotropin rBST / rBGH pus milk (Posilac shots) – not to mention most of your corn (maize), soybeans, canola (rapeseed), alfalfa, cottonseed oil, the banned sugarbeets, sunflower oil, and coming soon: WHEAT!

Monsanto products being FDA approved by former Monsanto employees, is commonly referred to as the “revolving doors” of Washington DC. When FOX News reporters in Florida tried to tell us the Truth about Monsanto’s “pus milk”, Monsanto’s RoundUp TELEVI$ION AD CAMPAIGN decided what the Truth was; the Supreme Court of Florida ruled that it is LEGAL for Fox News to lie on TV.

“Monsanto should NOT have to vouchsafe the safety of biotech food. Our interest is in selling as much of it as possible. Assuring its safety is the FDA’s job” — Phil Angell, Monsanto’s director of corporate communications. “Playing God in the Garden” New York Times Magazine, October 25, 1998

Check out the Top 10 Facts YOU Should Know About Monsanto.