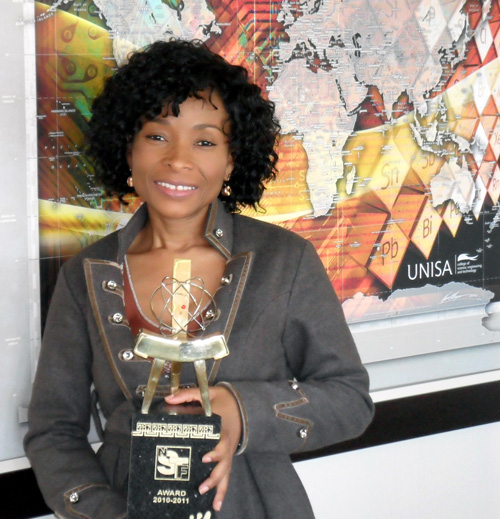 Prof Setati, Vice Principal of Research and Innovation at University of South Africa with the NSTF-BHP Billiton award she received in 2011.

The NSTF-BHP Billiton Awards encourage and reward excellence in scientific research, education, capacity building, management and communication and in technological innovation, thereby publicly honouring and celebrating outstanding contributions to Science, Engineering, Technology and Innovation (SETI) in South Africa. These are the longest standing awards for SETI in South Africa and the only awards that bring public and national recognition to the winners, thanks to sponsorships such as those of the Business Report and Mail & Guardian.

The National Science and Technology Forum (NSTF) is calling for nominations for these prestigious awards under nine different categories:
Awards for an individual and/or a researcher for outstanding contributions to science, engineering and technology (SET):

Awards to teams/individuals in organisations for research leading to an innovation:

You can now submit nominations for an outstanding scientist, researcher, engineer, technologist, innovator, manager or communication specialist. Enable your nominee to achieve public recognition on a national level! The process consists of two stages:

The NSTF will acknowledge receipt of the notice by email, and will provide all parties involved with the full formal nomination document for completion and submission by the Stage 2 deadline.

The criteria for evaluation of nominees are comprehensive to ensure quality and to maintain the prestige of the Awards. Nominators and nominees should take note that planning and time are required to complete the nomination document and therefore a period of 13 weeks is provided for preparation. Read more about the NSTF-BHP Billiton Awards and the nomination information where you can access the online Intent to Nominate form.
Processes to follow after the submission of completed nomination documents

An adjudication panel of independent judges, representing six different sectors within the NSTF as well as the award partners, will review the nominations to select the finalists and winners. Thereafter, a panel of experts, appointed by the NSTF Executive Committee, will assist the adjudication panel by reviewing and providing validation of the final selections.

The nominees eligible to compete for the prestigious NSTF-BHP Billiton Awards will be announced through the Awards eNewsletter during April 2014, followed by the announcement of the finalists during May 2014. The announcement of the winners will take place at the Awards Gala Dinner, planned for the end of June 2014, and presided over by the patron of the Awards, the Minister of Science and Technology. Nominees are advised to diarise thesearrangements and then watch their mailboxes for news from the NSTF Office!