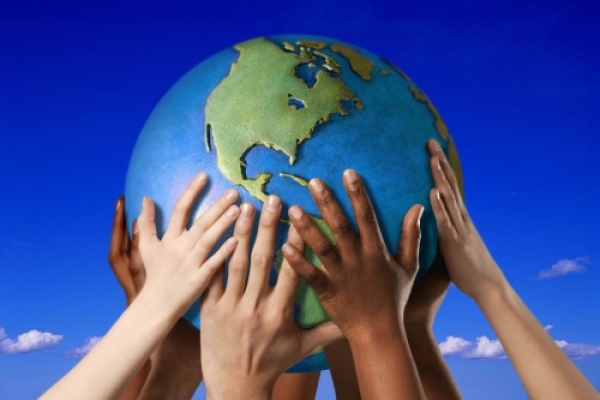 It looks like our species has finally begun to reunite economics and ecology for a sustainable future. Biologist Dr. Reese Halter looks back at a few examples of environmental triumphs that we can all celebrate from 2012:

Professor Matt King of the University of Tasmania dispelled climate deniers by revealing that 190 million metric tons of ice a day have been melting from Antarctica – that’s the equivalent of 1.5 million blue whales in volume a day – or more than a half a billion blue whales worth of ice turning to water a year. In fact, both Antarctica and the Arctic are warming at least two times faster than the rest of the globe.

Australia – the largest coke coal producer in the world – brought into effect a carbon tax. And if they can do it, so too can every other nation on the globe.

Australia has also committed to creating the world’s largest network of marine parks. Australia is providing international leadership on protecting Earth’s oceans. Five main zones along offshore waters will surround every state and territory in their nation.

In recent years, research into neonictinoids have exposed them as a threat to to honey, stingless, bumble and solitary-bees – yet most of the world including America and Canada still allow these poisons to be applied even though the residual toxicity lasts both in soils and water for up to a decade. This year, Australia has a nationwide injunction in situ as scientists review all neonictinoids.

Whales are helping scientists understand rapid climate change. Statistics from 2008 showed that 13 million people from 119 countries paid $2.1 billion to see the whales. Whale watching is growing at 10 percent per annum. It is time once and for all to end the whale hunt, and grant amnesty to these magnificent creatures. In 2012, the Sea Shepherd Conservation Society continued to lead a worldwide campaign against Japan to stop senselessly slaughtering whales.

In May of this year Dr James Hansen, director of NASA Goddard Institute for Space Studies and author of Storms of my Grandchildren did the math and presented the outcome of exploiting and burning oil deposits from the Albertan oil sands. He estimated that between 20 and 50 percent of Earth’s species would be driven to extinction. Sea levels will rise and destroy all coastal cities. In the meantime, semi-permanent droughts will become the normal across western United States including the semi-arid region from North Dakota to Texas, and when rains occur they’ll be extreme events – fraught with intense flooding.

And for those who think fracking is the short-term solution to our energy problems – think again. A University of Cornell study lead by Dr Michelle Bamberger examined 24 cases of farmers’ cattle in six shale states and found that livestock and domesticated pets exposed to fracking fluids suffered from neurological, reproductive and gastrointestinal illnesses.

Bill McKibben is leading the charge for climate activism across our nation and 350.org has its target firmly set on college investments – taking a page out of pushing universities to stop investing in apartheid-era South Africa during the 1980s. What does your college investment portfolio contain? Please ask your alma mater to divest of all oil, gas, and coal companies.

Kudos to the Arctic Methane Emergency Group (AMEG) headquartered in London for bringing worldwide attention to the vast methane deposits currently locked by the weight of the frozen ice underneath the Arctic’s continental shelf, and their foresight for proposing an innovative geo-engineering solution of pumping seawater spray into the atmosphere to create white clouds, mimicking the missing sea ice, to help cool a warming Earth.

America experienced the assault of climate disruption on their fruit and sugar maple trees across the northeast. It devastated apple, grapes, peaches, apricots and other fruits in addition to tainting the 2012 maple syrup crop. And this year, Yale University reported that 70 percent of Americans now say that they firmly believe in global warming – the highest percentage ever recorded.

Colleges and Universities, cities and towns, and corporate America are providing necessary climate leadership, creating jobs and helping to reduce their carbon and water footprints. Climate change is also a citizen’s issue – that means we are all required to lend a helping hand.

A couple of weeks ago, the Energy Department announced $28 million funding for seven offshore wind projects including one on Lake Erie. These projects will generate 200,000 jobs; $70 billion in annual investments in the coming decades and generate 4,000 megawatts of green energy – the equivalent to five mid-sized coal fire power plants.

And finally, for those who doubt that humans are exceptional tool-makers and problem solvers I’d like to introduce you to Izhar Gafni, an Israeli inventor who dreamt of creating a transportation ‘game changer’ in Africa. He’s perfected a bicycle made almost entirely of cardboard; it costs between $9 and $12 to manufacture. This remarkable 20-pound invention can support riders up to 485 pounds.

2012 has given us many environmental wins to be thankful for. This is only the beginning though: let’s hope we take things to a whole new level this year!