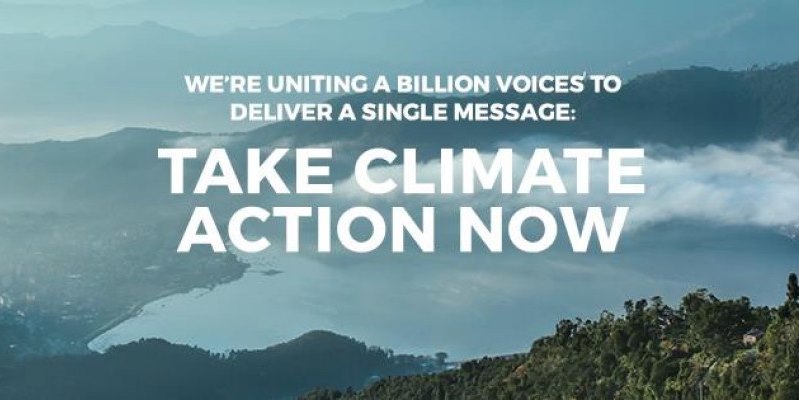 Former US Vice President and Chairman of The Climate Reality Project Al Gore is leading the global broadcast of The World Is Watching, a live 24-hour program from around the world too discuss climate change and activism with world leaders. The live broadcast also features musical acts such as Elton John, Bon Jovi, Duran Duran, Neil Young, Mumford and Sons and Florence + The Machine.

It is airing from 6pm CET, Friday, November 13 to 6pm CET, Saturday, November 14. The show will be broadcast from the Champs de Mars in front of the iconic Eiffel Tower in Paris and will feature leaders from around the world in addition to actors, activists, scientists and some of the biggest names in music.

The purpose of the broadcast is to generate momentum for strong action on climate from world leaders in the final days before the UN climate talks in Paris. This round-the-clock and round-the-world program will unite a global audience in demanding a strong climate agreement in Paris and include presentations and performances from leading climate experts and activists and award-winning celebrities and musicians. French leaders President François Hollande, Paris Mayor Anne Hidalgo and musical group Duran Duran will join in the broadcast from Paris.

Time to make the shift

“We’ve come a long way in five years,” Gore said from Paris on Friday, after the animated spot voiced by Margan Freeman ended. He stood on a stage in a sort of clear plastic dome with the Eiffel Tower visible in the background. “People, businesses and leaders everywhere today are realizing that strong action is essential to solve this crisis,” he added. “What we need now is for people all over the world to speak out, to encourage and motivate their leaders to get active in this shift.… That’s what the next 24 hours are all about. Because, truly, today the world is watching.”

The fifth annual event is “about making sure the people of the world are informed and engaged so that they can make their voices heard in their capitals and at the negotiating table in Paris,” Al Gore, former vice president of the U.S. and founder and chairman of the Climate Reality Project, is quoted as saying in a press release. “The U.N. climate talks can be a breakthrough moment to change the dangerous course we’ve set for our planet. We want the world’s leaders to know the world is watching, and it’s time for them to act.”

“I’m thrilled to be producing the show for a third time. This is the first time my company has been tapped by The Climate Reality Project to take the lead on all aspects of production and this year’s show is going to be bigger and better than ever. It’s turning out to be an unprecedented global event leading up to the UN’s climate talks in Paris and we are truly honored and excited to be a part of that,” said Peter M. Green, Executive Producer of the show and partner at ShoulderHill Entertainment. “In addition to creating great content, shining a light on global climate change is really something the team at ShoulderHill feels strongly about.”

Anchored from Paris, The World Is Watching is broadcasting live from the Champs de Mars in the Seventh Arrondissement and feature both live and pre-recorded segments from other spotlight locations in the United States, Australia, Brazil, India, Canada, China, the Philippines, and South Africa. The broadcast will focus on the local and global impacts of climate change, as well as promising solutions that can be found around the world today.

In addition to featuring engaging stories of climate impacts and solutions, each hour of the broadcast is being punctuated by thought-provoking, knockout appearances from all-star participants. The broadcast is aimed at urging world leaders to push for the strongest possible climate agreement at the upcoming UN conference in Paris and at urging people to take action in their own communities and homes.

“This live show with the Eiffel Tower in the background will reach people in every corner of the earth and is unifying us all on this ‘Road to Paris’. The Climate Reality Project and Live Earth teams are doing incredible work to make sure it is broadcast and webcast and streamed everywhere possible,” said Danielle Addair, President of ShoulderHill Entertainment, LLC. “Everyone here feels privileged and honoured to work on this important project. The message is urgent and so it is gratifying to see that so many countries, leaders, artists and activists are involved.”

ShoulderHill Events has partnered with renowned French Production Company Together Media. The project is being led by producer and director Renaud Le Van Kim and producer Guillaume LaCroix, who are leading all aspects of the production in Paris.