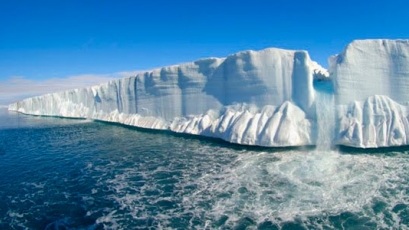 Scientist Julienne Stroeve has studied Arctic ice for decades. Every summer she travels north to measure how much ice has melted. She knows that climate change is melting the ice fast, but a recent trip surprised even her. Vast areas of Arctic ice have disappeared, beyond our worst expectations.

This is what the experts warned us about. As the earth warms, it creates many “tipping points” that accelerate the warming out of control. Warming thaws the Arctic sea ice, destroying the giant white ‘mirror’ that reflects heat back into space, which massively heats up the ocean, and melts more ice, and so on. We spin out of control. In 2013 everything – storms, temperatures – was off the charts.

This CAN be stopped, if we act very fast, and all together. And out of this extinction nightmare, we can pull one of the most inspiring futures for our children and grandchildren. A clean, green future in balance with the earth that gave birth to us.

There are only 24 months until the Paris Summit, the meeting that world leaders have decided will determine the fate of our efforts to fight climate change. It might seem like a long time – it’s not. We have 24 months to get the right leaders in power, get them to that meeting, give them a plan, and hold them accountable.

And it’s us vs. the oil companies, and fatalism. We can win, we must, but we need to blast out of the starting gate with pledges of just a few dollars/euros/pounds per week until the summit – we’ll only process the donations if we hit our goal. For the world we dream of, let’s make it happen.