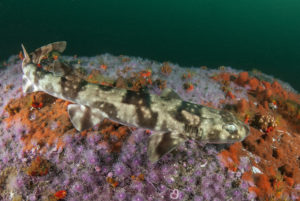 The International Union for Conservation of Nature recently released an updated Red List of Threatened Species. The Red List has become the gold standard for measuring species population stability, and it is the world’s most comprehensive data source on the extinction risk of species categorising (as either extinct, extinct in the wild, critically endangered, endangered, vulnerable, near threatened, least concern, data deficient or not evaluated).

When it comes to the world of sharks and rays, 30% of all assessed species are threatened with extinction; Let that sink in for a moment – 30% of the globes sharks and rays (of those that have been assessed, bearing in mind there are some are yet to be evaluated, and some species still to be discovered) are in trouble. The most recent update to the Red List saw several sharks and rays found in South Africa’s waters shift in their Red List categories* – some for the better, and some found to be at even higher risk.

The tiger catshark and puffadder shyshark (photographed above and below) are both South African endemics (only found in South African waters) and commonly caught as bycatch (untargeted catch) by fisheries in bottom trawls. The tiger catshark is now listed as vulnerable – from data deficient, while the puffadder shyshark is now listed as endangered – previously near threatened, and two steps closer to extinction.

Data from the Department of Environment, Forestry and Fisheries and models developed by them indicate that the pyjama shark and leopard catshark (also proudly South African endemics) have shifted from near threatened to least concern – this is a positive shift, indicating that their population is stable.

Tope, or locally known as the soupfin shark which is heavily fished by anglers and trawlers for oil and meat, is now listed as critically endangered, falling from its previous vulnerable status. This should spark a call to urgently strengthen management plans for this species before it becomes extinct in the wild. 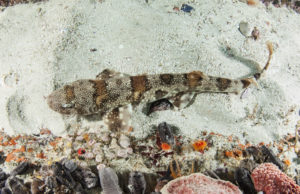 The blue stingray also shifted from least concern to near threatened. The longhorn pygmy devil ray and the Kuhl’s devilray are both listed as endangered. The former was previously listed as near threatened while the latter was listed as data deficient. Both species are caught in gillnets and trawls and now only one step away from extinction.

The data from the IUCN Red List provides important insights into which species are under severe extinction threat and helps inform management decisions for those species, it also helps educate the general public so they too are aware of species in trouble and can make informed decisions around their everyday actions. Some of our sharks and rays are as, if not more, endangered as rhino – so we need to afford them the same level of attention and protection.

The Shark Attack Campaign is a predominantly social media driven movement which hopes to see the increased protection of shark and ray species in South Africa’s oceans. The campaign website, while it does unpack the threats to our some 200 species of sharks and rays, offers very specific and extensive solutions and actions that everyone, not just conservation and civil-society organisations, can take to help protect our diverse marine life.