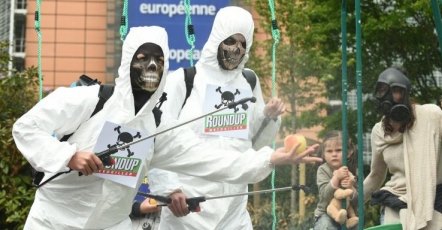 A toxic weed-killer that probably causes cancer is so common that studies have found it in our blood, but we have we no idea when we are exposed to it.

For a year Monsanto has lobbied Europe to re-approve this poison, and Avaazers have blocked every time. Now it’s being brought to a final vote, and the chemical giants are pulling out all the stops.

Now, for the first time ever, glyphosate could be banned! Our public campaigning is beating them out, and we have an extraordinary, against the odds, chance to win.

We have just five days! Sign the urgent petition now – if we get action in the EU, it will set a precedent for it to be removed everywhere. Each signature counts – our numbers will be shown on an LED screen right outside the meeting:

We’re all at risk. And it’s not just a threat to our health, chemical-driven industrial agriculture produces a third of greenhouse gases, and destroys ecosystems that sustain life on Earth. The sooner we phase out glyphosate the better. If we rise to this moment, our movement will be playing a key role in one of the key battles of our time.

Relicensing glyphosate was supposed to be a formality and decided behind closed doors, but our massive petition, tens of thousands of phone calls, emails and tweets to EU government officials, and protests have made the impossible possible. Now it’s crunch time!

But we are up against one of the most powerful companies in the world. Glyphosate is the chemical cornerstone of Monsanto’s empire, and it brings in billions per year. That’s why it’s going to take all of us to make sure the decision makers see unprecedented numbers demanding precaution before profits.

If we win in Europe – we are not only setting a course away from glyphosate globally, we are challenging the absurd system by which these chemicals are approved, and dealing a critical blow to the corporate capture of our democracies. With this we will begin to change the future of our food all over the world. This is our moment to turn the tide – let’s do it!

In determination and hope,