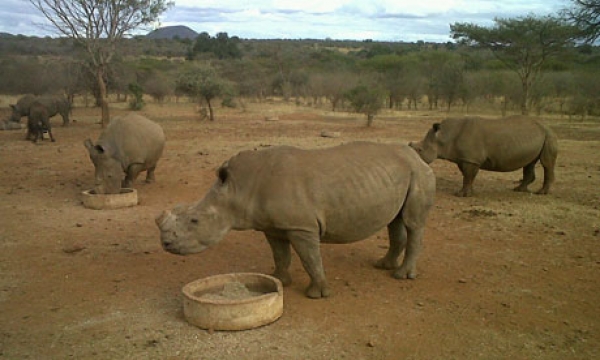 It is a violent act to kill a defenseless, non-offending animal like a rhino. However we will never see the end to such violence if we do not deal with human poverty that exists within ourselves and on the edge of wildlife reserves.

Poverty can be physical like starvation, disease and homelessness, but it can also be emotional – the inner emptiness that leads to deprivation rage and many types of addictions and obsessions from drinking, drugging and promiscuity on one end of the lifestyle continuum to perfectionism and being a workaholic on the other end.

A lack of emotional intelligence also compromises the way we think, instead of being able to manage different perspectives and different needs in a comprehensive way with respect and integrity for all, we disintegrate into discrimination and competition for resources. This too leads to poverty – someone is poor because someone else is rich; someone is superior because they are white and someone else is inferior because they are not. This divided way of thinking is the core of any debate and fundamentally pervades the different perspectives about rhino preservation.

Small land owners who ‘farm rhinos’ argue the rhinos will only survive if hunting is allowed. Animal’s rights activists believe animals should not have to earn their existence by being treated like a commodity and there should be no culling at all. Wildlife organizations and conservationists try to preserve the rhinos by controlling who gets hunting permits and for what purpose; by activating against government policies that do not protect the rhino and they cry against pseudo-hunting where names and credentials of hunters are falsified so that they same land owner can kill as many rhinos as he likes. Still other organizations are trying to educate the Chinese about the horror they are causing when they use rhino horns for their medicine.

We need emotional and ecological intelligence

Thus saving the rhino and dealing with a lack of emotional and ecological intelligence in humans goes hand in hand. Killing a rhino, in whatever way possible, to hack off its horn to sell for Chinese medicine may provide food for a family or wealth to a wildlife land owner, but what does it to do the human soul? Are there other options to stave off starvation, get rich and feel like a provider?

Is it ecologically intelligent to have more children than you can support or more wealth than you need to survive and plunder the land so that it can no longer reproduce and be self-sustaining?

The Rwandans lost their soul and their respect for one another because they swallowed the ideology of separatist thinking bred by ‘clever colonialists’. They began to move away from community living that included Hutu, Tutu and Tootsie when they began perceiving each other through discriminatory glasses – you have more cattle than I do or you have a longer or smaller nose! The divide deepened over years of propaganda to erupt in one hundred days of grotesque acts of genocide. How many ‘genocides’ do we need to endure on the African continent, in fact throughout the world, before we self-destruct, the land is desertified and many species of flora and fauna become extinct?

Yearly rituals to remember the genocide

The Rwandans, in finding a way back to hope and restoration, are an example to the world. Their success lies in the yearly ritual of remembering and mourning between April and September each year for one hundred days what they did to each other in the same time period in 1997. During this time of memorial where a flame burns like a torch outside the Genocide Memorial museums scattered throughout the country, they remember their loved ones and that they will never do this to one another again.

A Rwandan journalist’s poem on the wall at the Kigali Memorial Museum agonizes:

Rwanda before colonization is a country of hills, rivers, forests, lakes and laughing children, markets of busy people, drums, dancers, artisans and craftsmen.

A land that is rich and fertile with a pleasant climate, a home for centuries to:

Genocide is the dark shadow that broke us apart, a bitter part of our lives, but we must remember,

For those we lost

So that we never repeat this moment again

The transition is pioneered by a choice to be aware, to take responsibility and ask forgiveness from each they have perpetrated. The result: healing and reconciliation.

Once a year, for the last 7 years, the Rwandans gather in colorful clothes, swaying in rhythmic dance to celebrate the birth of babies born each year to the families of gorillas that live in their mountains. They have learnt that their wild animals and their forests are their survival and they take care of them. They too are an example in all conservationary and human circles because they have a government that supports non-violence, community living, and that mandate that 5% of all benefits from ecotourism and conservation must provide for the people. Rica Rugamba, the current President of the Rwandan Development Board states:”When people are poor it is because there is deforestation and dehumanization.”

Poverty is most pervasive form of violence

Tau Malachi, a bishop within the Sophian Tradition of Gnostic Christianity advocates:

“To allow poverty in the modern world is the most pervasive form of violence we enact upon one another. As long as we allow peoples to live in poverty, there will be no real or lasting peace – no end to violence, terrorism, and war (and I would add no end to the destruction of wildlife and wilderness places). Selfishness, greed, and hatred produce poverty, a great adversary to our humanity. If our divinity is to be found in our humanity, then poverty is also an adversary of the divine kingdom.”

We do find solutions when we focus on killing the poachers to stop the killing of the rhinos; or when we allow rhino hunting or ban it. We do not find answers when we are single minded about educating the Chinese about what they are doing to the rhinos when they want their horns to make anticarcinogenic medicines – maybe they, and us, should change our lifestyles so that there will be less pollution, less stress and our immune systems will be able to guard against carcinogenic cells multiplying into cancerous tumors.

We only find solutions when we acknowledge that healing ourselves and preserving the earth is a task of integration: hearing everyone’s opinions and then with mutual respect creatively finding truths that translate into actions that benefit us all. However to think in an integrated way we need to reach into our hearts not just our heads.