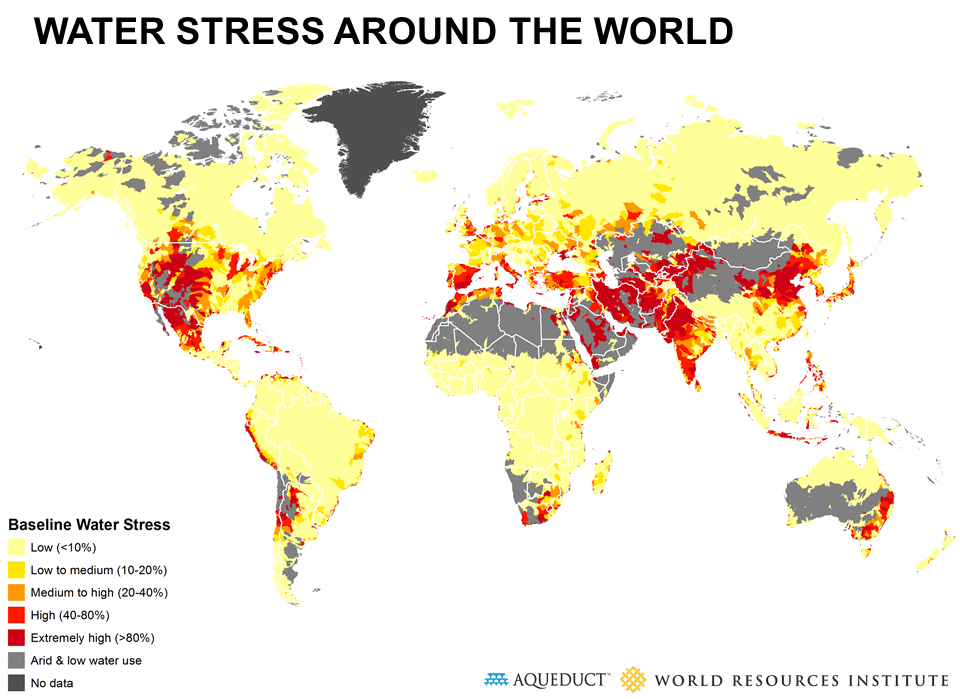 That means that in certain areas more than 80 percent of the local water supply is withdrawn by businesses, farmers, residents and other consumers every year. Not all of that water is consumed – it may flow back into a river after it’s used and be available again downstream – but the demand still creates competition where it is needed.

These “stressed” areas are also the ones most vulnerable to episodic droughts. With chronic over-use of water resources, it only takes a string of a few bad rainfall years or poor management decisions to plunge a region into crisis and chaos.

And indeed, that is what we appear to be seeing across the world over the past few years. Here’s a look at seven extreme droughts that have occurred in the past decade:

Australia’s “Millennium” drought began in 1995 and continued country-wide until late 2009. Reservoir levels fell precipitously, as did crop production and industrial water use. A number of cities, including Melbourne, Sydney and Perth, built desalination plants in an effort to partially drought-proof themselves, while other areas pursued grey water recycling projects. Between 2001 and 2012, the federal government provided $4.5 billion in assistance to drought-affected farmers and small businesses .

In 2010-11, following quickly on the heels of the drought, Australia experienced its worst flooding in half a century, as an area of Queensland larger than the size of France and Germany combined flooded, affecting 200,000 people and costing at least $10 billion.

Spain had to import water by ship from France

Drought in Spain’s northeastern region of Catalonia grew so severe in 2008 that Barcelona began importing water by ship from France. About 70 percent of Spain’s water goes to agriculture, much of which is “wasted in antiquated irrigation systems and the cultivation of thirsty crops unsuitable for arid lands,” according to The Independent . Other critics pointed to low water prices as the culprit for the crisis. Low water prices, it is often argued, result in profligate water use and low investment in water-efficient infrastructure.

India water loss can be seen from space

Twin satellites from NASA’s Gravity Recovery and Climate Experiment (GRACE) are able to detect changes in the Earth’s gravity field brought about by changes in mass distribution, including changes in groundwater storage. Nowhere on Earth are groundwater declines greater than in northern India; NASA found that large-scale irrigation caused 108 cubic kilometers of groundwater loss in Haryana, Punjab, Rajasthan, and Delhi between 2002 and 2008. The study’s lead, Matt Rodell, observed that “The region has become dependent on irrigation to maximize agricultural productivity. If measures are not taken to ensure sustainable groundwater usage, the consequences for the 114 million residents of the region may include a collapse of agricultural output and severe shortages of potable water. ” 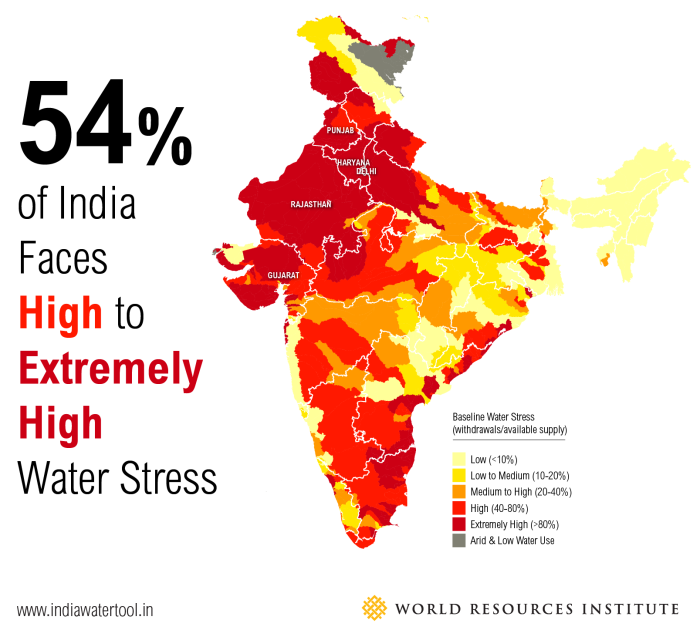 In July 2012, roughly half of India’s population – about 670 million people or 10 percent of the world’s population – temporarily lost power following a massive grid failure. Some experts laid the blame on the severe drought affecting northern India. Low rainfall restricted the amount of power delivered by hydroelectric dams, and farmers used more power than usual to run water pumps to irrigate their crops.

The dark side of China’s boom

Much of northern China is relatively dry, not unlike California and the rest of the U.S. West. Yet it’s also traditionally produced significant amounts of wheat and other grains, thanks to flood irrigation. Add to this inefficient system skyrocketing water use by industry, energy and municipalities, and China’s future might be drying up .

Government officials are starting to take action. Water is now one of China’s public policy priorities, and the central government recently launched a “Three Red Lines” policy to improve water use efficiency and place caps on water demand. Yet it remains unclear whether these policies are sufficient to overcome the country’s vast water challenges.

From 2006 through 2011, Syria suffered its worst drought and crop failure in recorded history. The GRACE satellite data revealed “an alarming rate of decrease in total water storage in the Tigris and Euphrates river basins, which [at the time had] the second fastest rate of groundwater storage loss on Earth, after India. ” While many other factors – political, social and religious – have contributed to the Syrian military conflict, experts argue that “the decrease in water availability, water mismanagement, agricultural failures, and related economic deterioration contributed to population dislocations and the migration of rural communities to nearby cities. These factors further contributed to urban unemployment, economic dislocations, food insecurity for more than a million people, and subsequent social unrest. ” 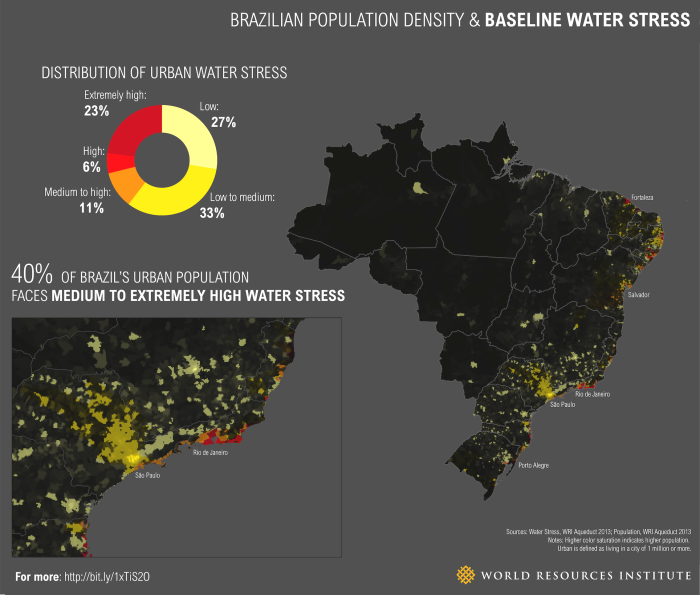 Parts of southeastern Brazil, including the cities of São Paolo, Rio de Janeiro and Belo Horizonte, are struggling through the worst drought in 84 years, with 40 million people and the nation’s “economic heartbeat” at risk. Reservoirs that supply water to these cities are at dangerously low levels. They’re also highly polluted, complicating things even further.

Unfortunately, politicians have failed to act decisively to take steps to minimize the impact of the crisis, raising levels of public distrust and frustration. There has even been talk of exporting “water refugees” and bringing in the military to help out if matters grow worse.

California is in the throes of an unprecedented drought, now in its fourth year. Governor Jerry Brown ordered mandatory restrictions on water use by state municipalities early last month, and a group of farmers with senior rights have since given up a quarter of their water this year in exchange for being spared deeper mandatory cuts . The situation is bad – even desperate for some farmers. As I argued in a recent blog, the state needs to improve its water governance in order to protect its economic interests and its citizens.

WRI’s Aqueduct project’s forthcoming projections for global water stress in 2020, 2030 and 2040 indicate that the global water picture is likely going to get worse over the next few decades. Larger populations and growing economies demand more water, and in some places, climate change will likely reduce available water supply. While our vulnerability to drought grows, the incidence of extreme weather events, including drought, will grow as well, according to most climate change experts.

Yet in this knowledge lies power. We know that drought risk is high and growing worldwide. We’re already seeing the impact water scarcity has on citizens, on the environment and on economies. Sustainable water-management plans, clear government monitoring and management policies and wise natural and engineered infrastructure investments could have helped to shore up the dwindling water supply, alleviating impacts on people, planet and economy.

It’s time to put this information into action. Businesses, governments and all water managers must quickly and intelligently and take measures to reduce vulnerability to drought events.