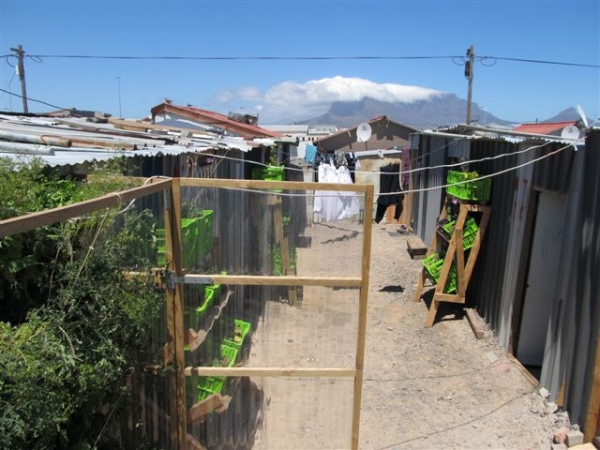 Stephen Lamb and Andrew Lord’s Green Shack featured at Design Indaba 2013 last week. They tell us about the concept that transforms temporary spaces into homes.

When we designed and built the entrance pavilion to the 9th Shanghai Biennale, one of the shared aims of the design team (The Liter of Light Foundation, Touching the Earth Lightly, Andrew Lord and Justin White) was to demonstrate that corrugated iron and timber need not represent poverty and oppression.

We place such suffocating constraints and definitions on the shack, the “temporary shelter”. Nature-based design however can redefine these self-imposed boundaries. We also overlook the fact that spaces of temporary do not need “permission”. Within this freedom is the opportunity for sensitive, human-hearted design to flourish.

We therefore decided to use the invitation to design and build the entrance pavilion to the 9th Shanghai Biennale as an opportunity to explore alternative, “community-led design” for temporary shelter in the context of our home, Cape Town. 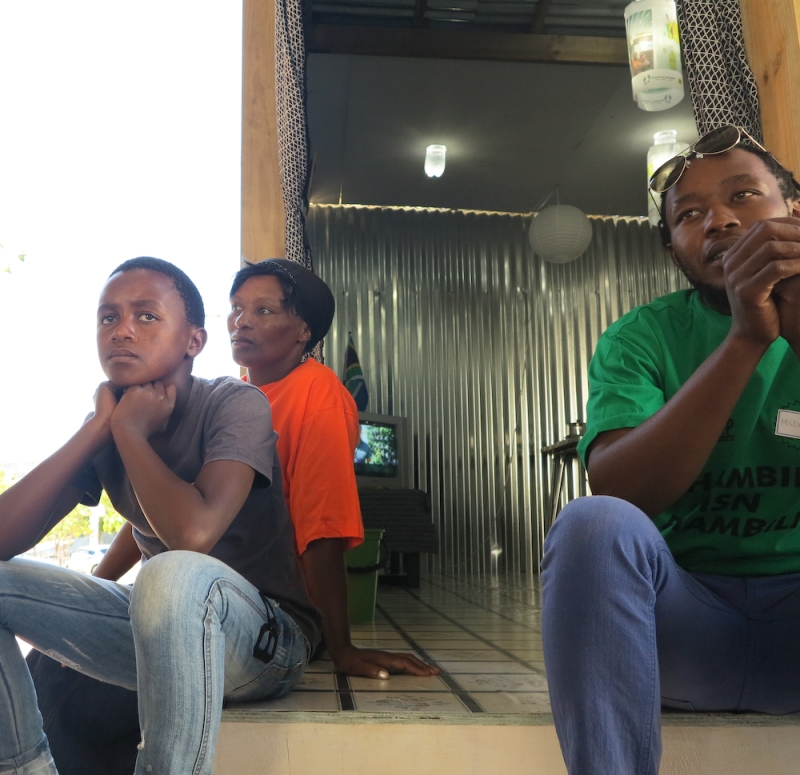 Manila and Cape Town are similar in that as Cities, we both suffer greatly from shack fires and flooding. We realized we could do two things at the same time, build the Biennale pavilion and through this develop ideas that can break the boundaries of what “the shack” can be.

The design therefore explores the transformative power of light, water and plants. This is expressed in simple, “real” and meaningful ways. This design process has led to the development and prototyping of the “Green Shack,” which looks at how simple, low-tech design can transform temporary spaces into “home” spaces. It is focused entirely on what we can achieve right now.

The desire to “do something now” is born out of the frustration of waiting. Spaces of “temporary” (informal housing) have become the “spaces of permanent”. In this space people wait years and years for politicians to make good on promises that are near impossible to fulfill.

These “spaces of waiting” become the most desperate of spaces. They become places where hope can die. Families find themselves destitute, between the promise and the lie, and lose years of their lives, waiting… 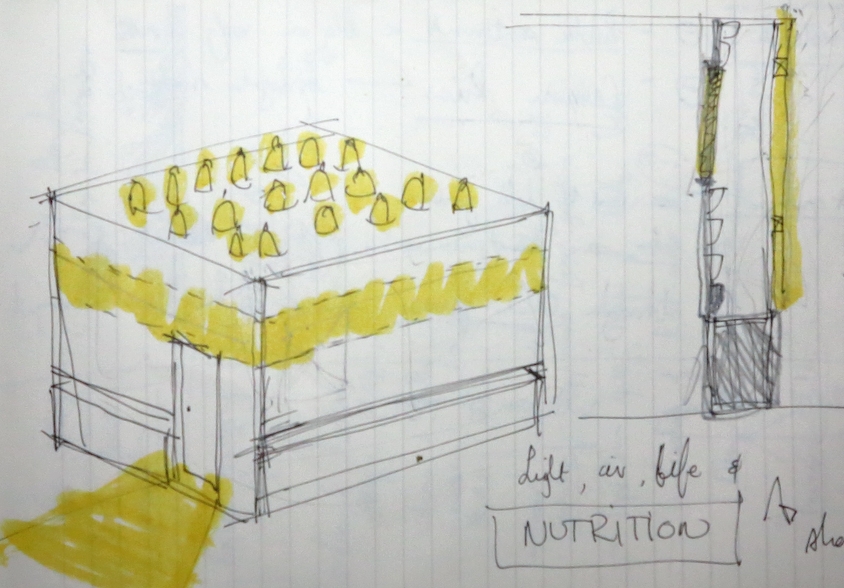 The Green Shack aims to change the spaces of waiting, into safer places of living. We must accept that the temporary space is not going to go away and adopt a pragmatic approach to what we can do about it, now.

Shack owners are affected by ground water flooding every year because the ground water level rises in winter above the surface. Shack fires kill and destroy lives of people and thousands of livelihoods each and every year. Food security remains a challenge, with few real solutions.

People need both low cost houses and food. Traditional thinking says the one comes at a loss to the other one. Human hearted design uses the one to compliment the other. It combines the two and loses neither. It suggests that you can address the need for food security and informal housing in the same physical space. 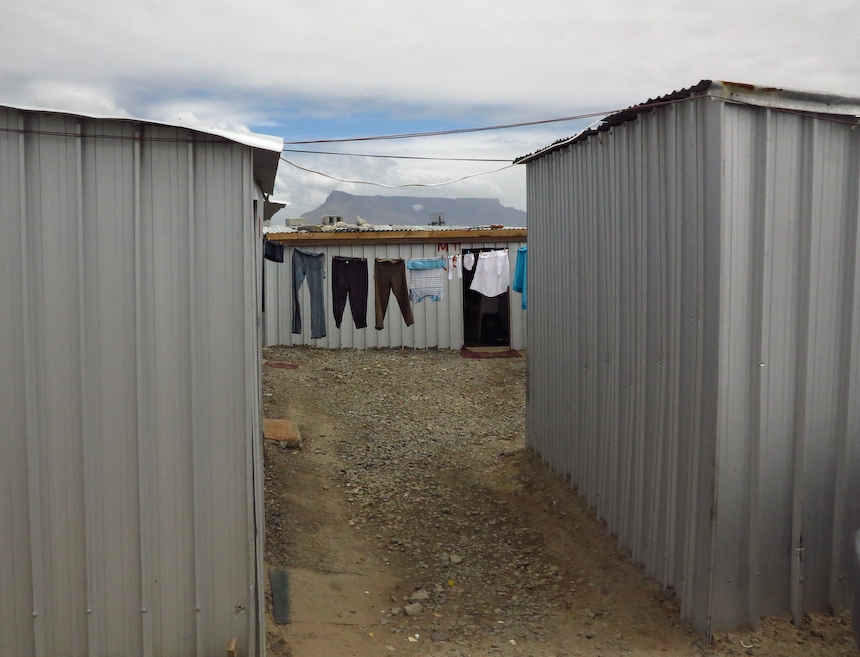 It achieves this by relying on cheap, low tech design that is innovative, simple and can be duplicated on a large scale.

To explain the concept, hold in your mind a cube. Like the shack, the cube has six sides. Human-hearted design looks to address the issues of fire, flooding, food security and insulation by exploring design opportunities for each of these six sides.

The first side of the cube is the floor. We raise the shack off the ground to respond to the issue of flooding. Communities around the world have been doing this for thousands of years. This is not a new concept.

The next two sides of the cube represent the sun-facing walls of the shack. On these two sides The Green Shack suggests they be wrapped with a fire-proof boarding, covered by a vertical thriving organic vegetable garden. This wall garden creates food for the household. It’s drip-irrigated using a low tech, slow-release gravity fed system via a pipe made of re-cycled car tires. Rain water is also captured off the roof and stored on site. The slow-drip nature of the irrigation system ensures that the wall is constantly wet. 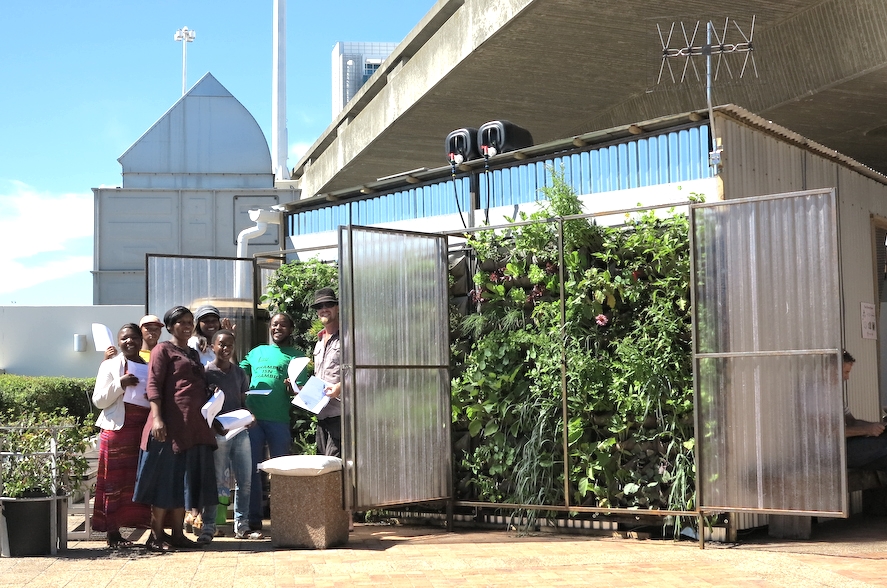 The vertical food wall is protected from the driving winds by a layer of see-through roof sheeting creating a lockable greenhouse. This also protects the vegetables from livestock and vandalism. This wet wall also regulates the temperature of the shack and it provides an alternative form of insulation, as opposed highly flammable forms of insulation like paper, cardboard and plastic.

When built at scale, the “wet walls” of organic vegetables and we soil reduce the combustible fuel loading of infromal settlements considerably, by replacing cardboard, paper and plastic with healthy, on-site food.

The roll-out of the Green Shack at scale also present considerable opportunities for the re-introduction of plant life and the creation of “green corridors” with informal settlements. They attract pollinators and insect life. Townships, previously seen only as biodiversity “dead zones” to botanist and conservationists can become “corridors” of biodiversity conservation value. 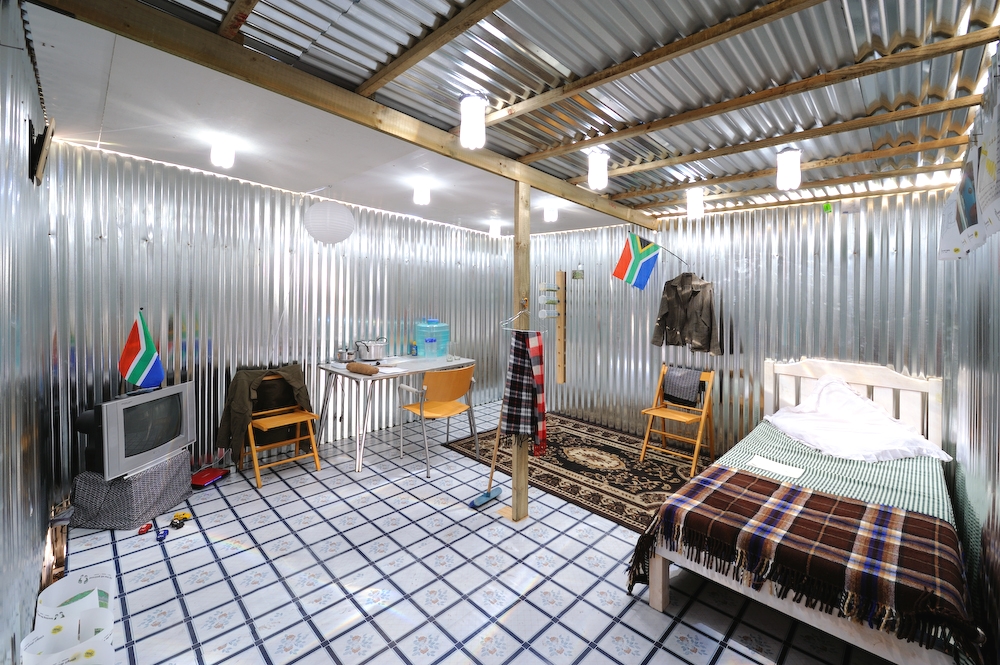 Moving to the two non-sun facing walls of the shack, the design suggests that we create a double-layer of corrugated iron, filled with sand bags.

On the sixth side of the cube –  the design suggests the installing of a ceiling under the roof made from a slightly thicker fire-proof boarding will further fire-proof the shack as well as regulate temprature. It also suggests the use of “liter of light bulbs”, which transmit sunlight into the shack. The solar bulb is a recycled two-liter plastic transparent bottle filled with water and three teaspoons of bleach.

The bottle is placed into the corrugated iron roof of the shack with a base plate, riveted into the roof and waterproofed from rainfall and water. Sunlight shines through the bottle, emitting a light that is more powerful than a conventional low energy light bulb. Its about low-tech electricty savings for those living without windows. 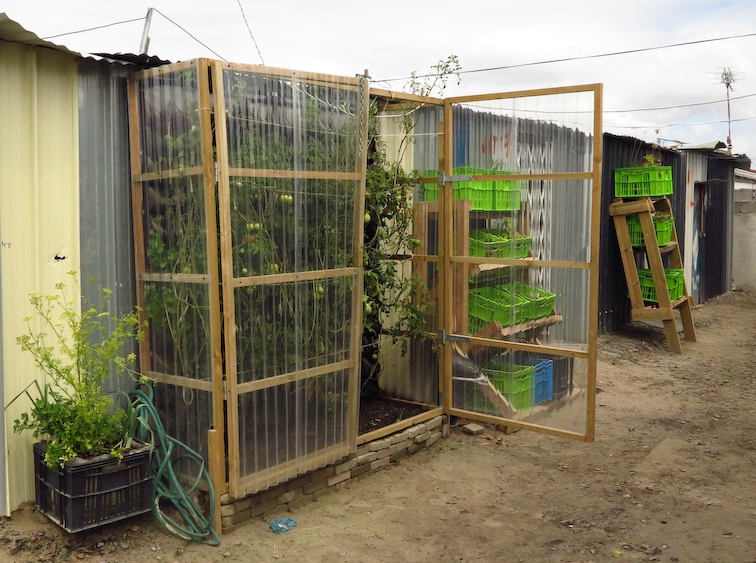 This is important to note, because many people living in informal settlements do not want windows, because of crime. The solar bulb let’s light in, but not the criminals.

The solar bulb is a cool light, because it’s not tungsten bulb. The isolative properties of the sandbags and vertical food “wet wall” along with the solar bulbs assist greatly in making the shack a more livable, less hostile environment. In addition, light from the sun is free, while electricity costs continue to soar in South Africa.

Ridding the Cape Flats of shack fires is not about efficiencies and cost savings in reactive measures. It is all about containing the initial source of fire to the internal boundaries of the shack itself, by throttling it to death right there.

This is a design challenge that can be met using low-tech, simple, human-hearted innovations. It can be done simply, now.

Nipping shack fires in the bud

The Green Shack aims to suffocate the initial fire inside the shack and to contain it within the internal perimeters of the shack.

Only once we have rid the Cape Flats of shack-fires can we can start growing healthy communities and healthy food. Stopping shack fires therefore becomes the primary challenge for all meaningful design efforts.

We emphasize that the Green Shack does not support the notion that shacks should ever become permanent. It simply says that within the long space of waiting, families must start living, in dignified and safe spaces, “while families wait”.

A sense of common reliance

We face challenges in this regard. Consumerism has taught us to be skeptical of things free. The Green Shack challenges these lies, and relies heavily on these simple truths and the gifts we get from nature. These being the sun, the rain and photosynthesis.
All are fundamental to every human-beings existence, no matter if they live in Bishops Court or the BM section of Khayalitsha.

By adopting this design approach we create “a sense of common reliance” between the rich and the poor – something that is so desperately needed in Cape Town’s “tale of two cities” where the rich live side by side with the poor.

The Green Shack also reminds us of the “democracy of nature”. That plants want to grow, and do grow, in rich and poor areas.

Human-hearted design invites light, water, plants and life. It goes back to basics to the fundamentals on which we all rely. 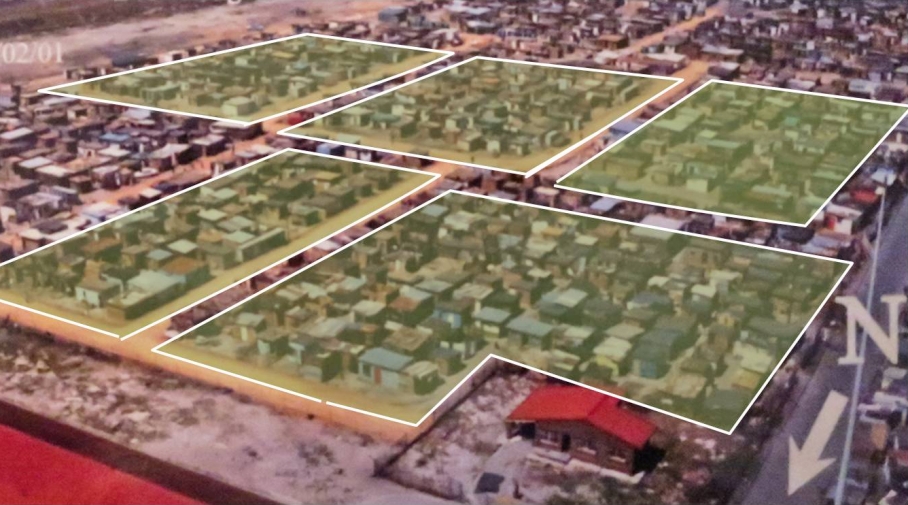 The term “blocking” refers to building or re-building shack according to a spatial development plan. The concept of the “Green Shack” is intended to “piggy-back” this infra-structure development and create what we call “Green Blocks.”

These “Green Blocks” can act as corridors for insect life and life other fauna and flora that can be introduced into this network of vertical gardens.

Prior to establishing TEL, Stephen led the anti-shack fire initiatives of the Ukuvuka Firestop Campaign for four years. This included initiating the first formal fire-mitigation plan undertaken by the City of Cape Town in Joe Slovo. This plan resulted in the reduction of runaway shack fires by 98% and was the start of the concept and term “blocking” and/or “re-blocking”.

Stephen also ran the “Learn not to Burn” Campaign while with the Ukuvuka Firestop Campaign, initiated the container rooftop garden, piloted the use of helicopters to fight shack fires.