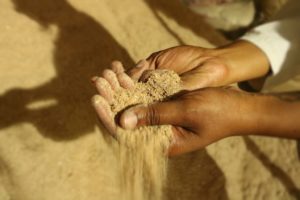 It is estimated that one-third of the food produced globally for human consumption is lost or wasted along the supply chain. This is a whopping 1.3 billion metric tons of food that doesn’t ever reach the consumer.

Most of the food loss occurs during transit from farm to fork, especially to urban markets. Food losses represents a waste of land, water, energy, financial, agrichemical and mechanical inputs. It not only impacts producers with reduced income and consumers with increased costs, but also challenges overall food security.

The Food and Agriculture Organization of the United Nations (FAO) estimates that saving one-fourth of the food currently lost or wasted globally would be enough to feed 870 million hungry people in the world.

For Africa, food losses are even higher— estimated at between 30% and 50%. It has a negative effect on food security, nutrition and economic stability. A number of studies have also observed that the underlying cause of post-harvest food waste and loss occurs at early stages of the food value chain. This can be associated with the lack of infrastructure for short-term storage, particularly at the farm level, as well as the lack of intermediate processing in the production catchments.

South Africa is said to be the most food secure country on the African continent. This is thanks to its robust, resilient and world-class commercial agricultural sector, at least from a commercial perspective. Currently, South Africa is ranked 44th out of 133 countries measured with regards to food affordability, availability, quality and safety, according to the Economist Intelligence Unit’s 2017 Global Food Security Index. However, it has been reported that an average of 12 million people go to bed hungry every night.