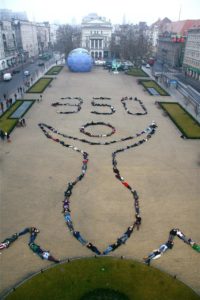 ‘There is a very unusual negotiation going on, between human beings on the one hand and the laws of Creation on the other. And the trouble with nature’s laws is that they don’t argue. They state their position and that is that.’

So said Bill McKibben, founder of 350.org in his moving speech delivered at a gathering of the South African Interfaith Environment Initiative in Cape Town. I thought I knew enough, but I was in for a shocking surprise. Bill is an award-winning environmental thinker and activist. His grassroots movement is spreading like wildfire to get the Climate Summit in Copenhagen in December to focus on reducing carbon emissions to the latest, and safest, scientific target of 350 parts per million.

‘Twenty years ago we knew that burning coal and fuel was filling the atmosphere with CO2. We knew that the molecular structure of CO2 traps heat. The only thing we didn’t know was how quickly and on what scale this would happen. We thought that the situation was going to be a problem for our children and grandchildren. That it would take several degrees of warming and therefore another 40 or 50 years for global warming to really assert itself.”

We were very wrong. The change happened much more quickly than we expected and the earth’s physical systems are far more finely balanced than we’d realised. The one degree temperature increase that we have so far caused has been enough to throw most of the world’s physical systems into a chaotic flux. From the summer of 2007 this realisation became inescapable when sea ice in the arctic melted with enormous speed. By late September 2007 there was 25% less ice than there had ever been in the Arctic. The earth viewed from outer space now looks dramatically different than it did just three years ago. With the layer of ice gone the earth is no longer able to reflect the sun’s rays back into space. Instead the water absorbs the rays and becomes warmer, melting the permafrost. As a result large quantities of methane are being released.

One in three humans’ water source is vanishing

It soon became clear that it wasn’t just Arctic ice that was disappearing – the high-altitude glaciers of the Andes and the Himalayas are disappearing rapidly too. Tibet’s glaciers contain the headwaters of the seven most important rivers in the world. One in three humans on earth lives downstream from those glaciers, which we think will be gone by mid-century or before.

The glacier at the head of the Ganges will be gone by 2035 at the current rate of melt. The 400 million people living on the Asian subcontinent are entirely dependent on that glacier for their irrigation and drinking water. There is no backup plan for when it disappears. Warm air holds more water vapour than cold air – this is one of the facts of creation. When the air is heated there is more evaporation and hence more drought, and that drought is now apparent around the world.

In Australia recently the drought was so bad that the government said they are not going to call it a drought, because they don’t know that it will end. They think it’s the new normal. Wet areas in turn are seeing dramatic increases in downpour. If you don’t believe the scientists, ask the insurance companies. They will tell you that their payouts for catastrophic accidents have increased exponentially. Don’t think there is anything natural about any of this – it’s not nature’s work or an act of God. This is us at work. We are taking two or three billion years of compressed carbon and releasing it into the atmosphere in a few short decades.

Conservative faiths have viewed the environment as pagan, and progressive communities have thought that it is a luxury they’d get to after dealing with war and the economy. They are both wrong. There is no other question that bears more deeply on both war and peace; nothing will bear more horribly on more people than removing the basic stability of the earth which people depend on to get their daily bread.

We need to do two things. One is to make a very quick transition in the developed world away from fossil fuels and towards renewable energy, much, much quicker than political systems and economic systems want to do it. We are going to have to push that change by putting a stiff scientific cap on the amount of carbon in the atmosphere. We also have to make sure that there are the resources to allow the rest of the world to develop without burning coal. If we burn it we will never be able to bring global warming under control. We have to navigate this immense challenge very, very quickly.

One useful thing has been learned in the last two years however; a much more defined sense of our predicament and a number to work towards. In January 2008 a series of scientific papers appeared. The first was from the greatest climatologist in the world, James Hansen from NASSA in the USA. Those papers gave us the number 350ppm (parts per million) of CO2. Hansen and his team wrote in language that for a scientific paper was almost scriptural:

‘Above 350ppm it is not possible to have a planet similar to the one on which civilisation developed and to which life on earth is adapted.’

350ppm is the absolute upper limit for CO2. We are already well past 350, the air outside today has 390ppm, and it is rising by 2ppm per year. These papers gave us something we lacked before, which is a number around which to rally. Discussion around climate change to date has been too general. We have had resolution after resolution, but in the absence of something to attach that to it has meant only baby steps against climate change. Now many of us are using that number to rally the world. The good thing about the number is that it crosses linguistic boundaries. And it provides a real target, a way to keep leaders accountable.

We don’t need an agreement on climate change from Copenhagen – we need a solution. We need to lay down the markers and say what that solution involves. This is a very unusual negotiation – it appears to be between the USA, EU, China, etc., but it is actually between humans on the one hand and chemistry and physics on the other. Between human beings and the laws of Creation. The trouble with nature’s laws is that they don’t argue. They state their position and that is that. Their position is 350, as above that the world is not going to work. So they’ve  taken that number and built a movement, which is growing fast.

We have picked one day, October 24, as the fulcrum for our actions. On that day around the world myriads of events will pound that number into human consciousness. It will become part of conventional wisdom and exert a gravitational pull. This will be the most widespread environmental day ever in the world, with roughly 150 countries partaking. People will be forming giant 3’s with their bodies in one city, 5’s in another, and 0’s in another. The BBC and CCN will have to put the pictures together, making the point that only by working across international boundaries will we get where we need to go. Some of these actions will be extremely dramatic and creative and there will be all kinds of art and music involved. It is important now to connect minds and hearts.

Finally faith communities are working together too. The Dalai Lama was one of the first people to endorse 350.org. Recently we received a photo showing 15000 Buddhist monks and nuns in the Hima- layas forming a huge 350 against a backdrop of melting glaciers. This was very moving because nobody there burns fossil fuels. Yet they understand that in a world wired together the way we are, we have to solve this together. The same thing is occurring in all kinds of religious communities.

One of the most important actions on October 24 will be the ringing of church bells around the world 350 times. We have passed the point where we are going to solve this problem one light bulb at a time, one community at a time. If we solve it, it is going to be one planet at a time. We are going to do it by reaching some kind of global agreement that really changes the ground rules of how we use energy on earth.

The most important kind of action we need now is symbolic action. Church bells don’t only call people to church; they were also traditionally rung to inform people of an emergency. We need to sound the alarm that creation is at risk. We need you to think of further creative responses that will capture people’s imagination and get on the front page of the newspaper – pictures joyful and powerful that will keep building this movement, re-shape conventional wisdom and therefore shape the outcome of negotiation.

There is no guarantee that this or anything else is going to work. There are scientists who think we have waited too long, that the momentum of these physical systems is too great. There are also political scientists who think that the power of vested interests in the fuel industry and the power of inertia in all of our lives are too great to overcome. They may be right, but science tells us that we have a small window open still – it is closing, but still there. And faith tells us that we have no choice but to work and hope.

As actions happen around the world people will send pictures to our website and we’re going to project those pictures onto a huge screen outside the UN as they flood in and use them for the six weeks between then and Copenhagen to really pound home this message and number. It is up to each group and community to make this message known – but whether what we do will be enough, that part is not up to us… ‘

The GREEN TIMES is trying to keep track of all the initiatives across the country. Do send us your plans and stories with pics of the day. With your help, we will cover all initiatives. Go to our ACTION button to see what`s planned for 24 October in South Africa. If you’re doing something and you`re not on our list – let us know.