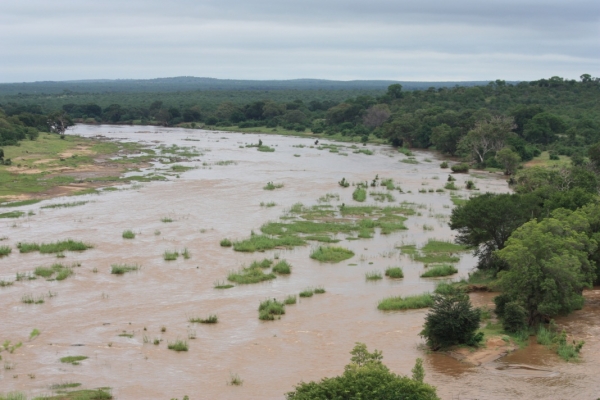 Olifants River as it flows through the Kruger National Park. Image: Wikipedia

COP get-togethers have been staged in South Africa, South America and most recently in the East. Much hot air was let off from stages and platforms, with very little happenning afterwards, most of which seemed to be forgotten until the preparations for the next COP.

The above two statements are quite correct as we all watch TV and listen to the radio and read the newspapers.

Our environment is becoming more and more under threat every day, and there seems to be no end to this trend or reversal thereof in sight.

Those of us who spend time in nature notice the changing landscape.

Travelling along the N4 one notices grey mine dumps where previously waving grasslands adorned the countryside.

Crossing the bridge across the Olifants River, one notices threads of green slush in the water.

Three years ago we read about the Crocodile deaths in the mentioned river, we all knew it was caused by pollution. It was later determined that the deaths were caused by pansteotitis or yellow fat disease, which came from the Catfish which were affected by the bio accumulation of heavy metals in the Olifants River. Catfish are preyed on by Crocodiles (their main source of nutrition), the infected Catfish then in turn infect the Crocodiles. This infection causes hardening of body fat. This rubber like hardening of body fat reserves leads to extreme pain, loss of mobility and eventually death.

Most of this pollution to the Olifants River originates from the industrial and mining activities in the Witbank and Middelburg areas.

It is said that the rising level of acid mine water in the Witwatersrand area will reach its critical level in September 2013. The South African Department of Water Affairs is now planning to neutralize the acid mine water and pump this neutralized water into the Olifants, the Klip and the Zuikerbosch Rivers.

The Department of Water Affairs is also now applying to do all of this mentioned in the previous paragraph prior to the completion of a proper Environmental Impact Assessment. The reason being that there is not enough time left to wait and assess the impact.

The water will be neutralized and not purified to potable quality – this after they have been well aware of this becoming a problem very many years ago.

What is not public knowledge is that between 300 and 500 tons of salts will daily be freed into the three mentioned rivers.

The above is stage one of the plans, stage two will commence after five years. The reason why the water is not purified during stage one is said to be lack of funding.

What seems to be of little importance is that the Klip and Zuikerbosch Rivers feed the Vaal River which in turn links up with the Gariep (Orange) River and ends up in the Atlantic Ocean at Oranjemund. Many creeks, spruits and rivers will be contaminated by the deposited salts. This will obviously determined during the EIA but the damage will already have been done.

It has to be kept in mind that all the users of the water from these sources will be affected by this, animals drink this water, rural communities draw water for their daily consumption, agriculture irrigate their lands from these sources. Aqua- and other cultures live and rely on this water.

What also seems to be of less importance to the decision makers is the depositing of salts in the rivers and streams immediately after the salted neutralized water had been freed into the environment.

International banks are not prepared to fund this project; due to the freed water not being fit for consumption.

The solution to the whole problem would be to neutralize the acid water and then to purify it to potable standards, this would alleviate the funding problem, the purified water could be sold and the return on the sale could be used to redeem the loan.

This plan was decided on by an appointed Interministerial Committee.

I may end this by just mentioning that the appointed Environmental Consultants are being paid the staggering amount of R40 million of tax payer’s money just for the Scoping Report, which has been on the go for just longer than a year with many stops and starts. Time does not seem to be of the essence.