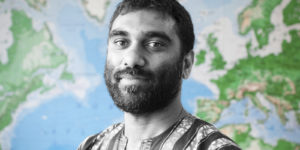 ‘People still talk about environmental change as if it is going to affect us further along the way. In 2008, 300 000 lives were lost as a direct impact of climate change. The lives being lost in Darfur is partly thanks to desertification.’

So said Dr Kumi Naidoo at the Local Climate Solutions for Africa 2011 congress. He refers to the consequences as ‘catastrophic’ if we don’t get emissions to peak by 2015.

‘Those who make the greatest contributions, carry the greatest responsibility. We are not asking for charity, we are asking for a climate change debt to developing countries.’

Naidoo does not just want us to secure the planet for ourselves, but for our children and grandchildren too.

For this to happen, Naidoo wants African governments to have a level of ambition to do what needs to be done against climate change.

‘We need to develop a grand global alliance between all groups and push national government to go further than they are willing to go.’

He believes that rich countries have not acted with urgency.

‘We have had a long history of UN summits with nice words, nice ideas, but no action. It is an injustice that poor countries are paying such a high price for what rich countries are doing.’

Naidoo said if we want to keep living a luxury life, we will need about five planets to sustain us.

‘We need to change our consumer habits,’ he says.

He pointed out that 1.6% of humans have no access to a single light bulb and are completely energy poor.

‘The struggle to avert climate change and the struggle against poverty are two sides of the same coin.’

The following challenges of communicating environmental change came up in Naidoo’s speech:

‘Finally, this area of activism comes up against a lot of lobbying.’

He mentioned that especially in the United States there are several fossil fuel companies trying to buy their way out of environmental co-operation.

We need to rethink business

‘How can we create green jobs? We will have to rethink all business.’

This means that business should green up their act and the goal of making money should not come without the goal of fighting climate change at the same time.

‘Climate change is offering us a real opportunity to break down the divide between rich and poor countries.’

‘We have to recognise that the boundaries of African governments were not done by our design.’

He then said with a lot of enthusiasm:

‘Nobody thought the Tunisian and Egyptian dictatorship would come down. If there is political will, things will change!’

‘We need to find a consensus and move forward. This year will be the 17th time these negotiations are going on. Durban COP 17 should be a destination, we need to craft a powerful agreement.’