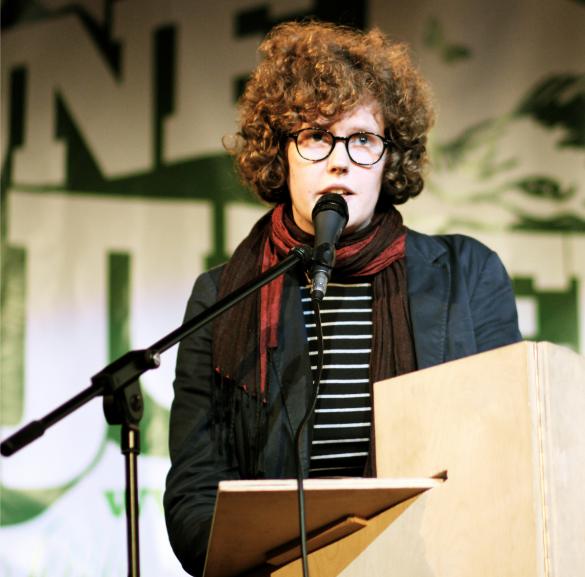 Activists around the world welcomed the latest UN climate science panel’s report by highlighting its passages on the need for fundamental change of energy systems.

The report was greeted by a group of German climate justice activists holding banners and photos of protests and campaigns from the across the world.

The campaigns are united by the Reclaim Power initiative, a global collaboration on the links between energy and climate change.

“We are highlighting the on ground experiences that this report talks about. In every country there are movements fighting for an energy transformation – stopping dirty energy and building community-controlled solutions. Governments need to listen to the voices of those struggles, read this science, and shut-out dirty energy corporations once and for all.” Theresa Kalmer, a local climate justice activist and organiser of the snap-protest at the launch in Germany, said.

Ambitious and drastic efforts cannot be delayed for later

“This report, and the previous report on the impacts of climate change, re-emphasize the urgency of undertaking drastic actions for reducing global greenhouse gas emissions. Ambitious and drastic efforts cannot be delayed for later if we are to succeed in stabilizing the earth’s climate and limiting temperature rise to below 1.5 degrees. Currently it says we could be on track for 7.8C by the end of the century – that is an unimaginable and horrific future.” Lidy Nacpil, a coordinator from the Philippines of the Global Campaign to Demand Climate Justice, said.

“This report should frame every Government’s understanding of the challenge in UN climate talks. Targets for climate pollution pre-2020 have to be raised much higher than current pledges,” said Osver Polo, coordinator of the Latin-American initiative “Construyendo Puentes” which is preparing regional civil society for the next UN climate conference in Lima.

Rocio Valdeavellano, member of the Citizen Movement on Climate Change (MOCICC) of Peru added: “The report shows that national contributions for post 2020 targets have to be much more ambitious than the numbers being discussed.”

“The science is clear that us in rich, industrialized countries bear the biggest responsibility for climate change and as citizens we plan to live up to that responsibility. This moment is the final death knell of the dirty energy corporations. They may kick and scream but the writing is on the wall that they will be consigned to the dustbin of human history.” Asad Rehman, Head of International Climate at Friends of the Earth EWNI said.

“The demand for progressive change in the world – such as ending slavery or apartheid – has always come first from people before political leaders. This report adds to the combined actions of ordinary people across the world who are saying loud and clear – end dirty energy now, support the just transition, and save the planet and its people.” Asad Rehman, Head of International Climate at Friends of the Earth EWNI said.

“Southern organizations and movements decry this pollution, and fossil fuel energy consumption being made in the name of the people. Developing countries must undertake their fair share of mitigation actions, in addition to assuming the balance of the share of the rich countries with finance and technology in order for the whole world to avoid devastating climate change.” Lidy Nacpil, a coordinator from the Philippines of the Global Campaign to Demand Climate Justice, said.

“The transformation called for by this report must not cost people and communities their jobs and livelihoods. The transition must be just as much as it must be swift.” Augustine Njamsnhi, Policy Coordinator of the Pan African Climate Justice Alliance, said from Cameroon.

Climate jobs for displaced and those suffering unemployement

“There must be clear measures to ensure ‘climate jobs’ are created – jobs and livelihoods that are necessary for the shift to low carbon, climate resilient and equitable development pathways – for those who will be displaced and for the many more who suffer unemployment and underemployment. We must be wary of false solutions, and look at all proposals holistically.” Augustine Njamsnhi, Policy Coordinator of the Pan African Climate Justice Alliance, said from Cameroon.

“The global energy transformation to fight climate change must also fight poverty. Energy poverty and inequality require immediate attention. It is reprehensible that more than 1.3 billion people on this Earth do not have access to electricity for their basic needs and many have barely enough, yet excessive energy consumption continues by elites, corporations, and the economies they dominate. A part of the solution to both this inequality and to climate change is community-controlled renewable power.” Lidy Nacpil, a coordinator from the Philippines of the Global Campaign to Demand Climate Justice, said.

“The transformation of energy systems is not just about what kind of energy is being consumed but who controls, it, who consume it, and why.” Theresa Kalmer, an organiser of the snap-protest at the launch said.