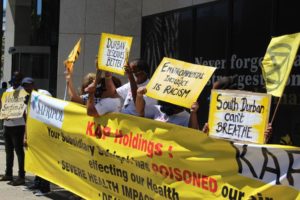 It is high time that Safripol, one of Africa’s top plastic manufacturers, takes full responsibility for its toxic legacy of air pollution in local communities.

This protest aimed to highlight the extreme air pollution that occurred at Safripol’s plant in South Durban on 16 August this year. More than 1700 people have fallen ill after inhaling noxious fumes emitted during the gas leak and chemical fire.

The event had devastating effects on the health and wellbeing of hundreds of people living and working in this industrial basin. During this particular incident, the plant released plumes of toxic chemicals that were smelled as far as 10km away. 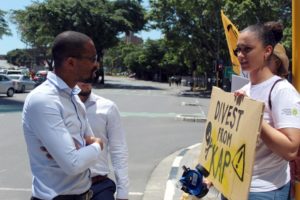 Since then, SDCEA has been banned from the factory. Its members say they have now been forced to take drastic action.

Community members breathed in their unfair share of this massive toxic emission, according to the Alliance. Safripol’s pollution affected babies, pregnant mothers, and people already suffering from respiratory illnesses linked to the notoriously polluted South Durban air. Yet, after providing minimal support, Safripol withdrew its mobile clinic and failed to pay for medication for those affected. 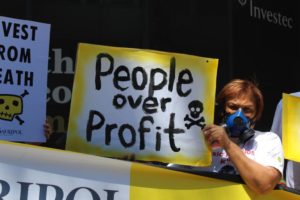 Approximately six cubic metres of ‘Dowtherm’ (a mixture of diphenyl oxide, biphenyl and diphenyl) was released into the air. This industrial chemical is known to cause respiratory health problems and skin irritation. Hundreds of residents within the area experienced burning eyes and mouths, nausea, bleeding noses, difficulty breathing, skin irritation and rashes, vomiting, headaches, and/or dizziness as a result.

Those who were directly affected were residents of areas in Wentworth and Merebank. Many residents, including children, needed immediate treatment after coming into contact with the gas. Most were hospitalised repeatedly due to prolonged symptoms linked to their exposure to air pollution. One person died due to medical complications.

“We call on shareholders to divest from the company due to its unethical practices,” SDCEA’s coordinator Desmond D’Sa said. “We need to hold the company responsible for failing to ensure our constitutional right to a clean and healthy environment.” 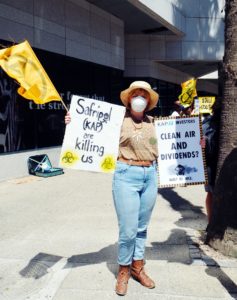 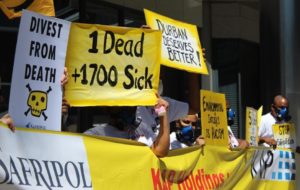