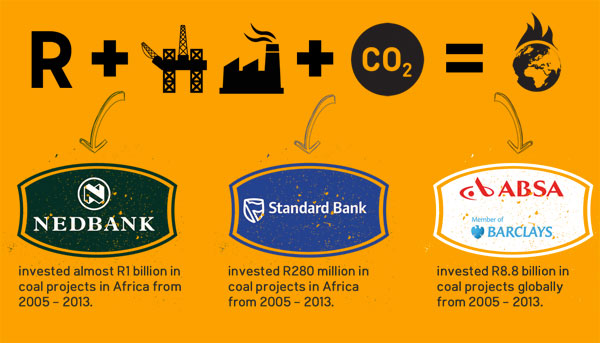 Activists in Sandton this week kicked off the campaign for a Fossil Free Africa. “This is a fight for our future, and that of our children — a future where we have clean energy and water to survive, and where our energy supply doesn’t cost the earth,” they said.

The activists were outside Nedbank’s headquarters to expose the bank’s greenwashing and their role in South Africa’s fossil fuel addiction.

“Nedbank has always told us they are South Africa’s only green bank, but behind closed doors, they’ve invested almost R1 billion in coal projects since 2005. This is a bank that talks green, but doesn’t walk anything like it,” said Fossil Free SA.

And other South African banks are guilty too, they say, so join the campaign and find out how you can tell them to stop the greenwashing and get serious about the environment.

This story came from Monica and the 350Africa.org team.

“Nedbank is aware of the allegations against us and we have crafted a response because 350 Africa’s view is obviously a very imbalanced one and does not take into account the economic imperatives the country is facing. Nedbank is leading the transition into a greener future by funding R25 billion in renewable energy over the last fours years. However the shift to a greener economy cannot be achieved overnight,  without compromising the needs of an already energy constrained economy. So our approach is a measured one.”

“Nedbank’s green strategy is premised on sustainability, being a multifaceted approach to the responsibilities we have to our stakeholders. Our approach is to meet social-economic imperatives such as employment and access to education, health care and basic services such as water, sanitation and electricity within environmental constraints.

Nedbank understands the requirements for global economies to reduce their dependence on fossil fuels and supports such a transition. As all credible scientific literature indicates, the transition will happen gradually albeit in an accelerated way over the next several decades, through the use of alternative supply-side energy sources and technological demand-side innovation.

We are therefore committed to investing in the green economy, as guided by our long term goals. At the same time we are also co-responsible for the provision of energy services into the economy today and during the transition. Given current electricity shortages that are negatively impacting the socio-economic conditions of the country, we need to grow our electricity supply while decarbonising the economy.

The Government has laid out a climate change strategy in line with international commitments. This has informed a significant reduction in our coal dependence and the implementation of a world class renewable energy programme. Nedbank fully supports this diversification of our electricity supply, and has committed R25 billion, over a four year period, in support of these projects.

Through Nedbank’s Fair Share 2030 strategy, we allocate money and resources towards closing the investment gap required to achieving South Africa’s goal of being a prosperous society. Amongst the many initiatives supporting this strategy are those that seek to optimise energy efficiency and further accelerate renewable energy generation, thereby reducing South Africa’s overall carbon footprint.

This commitment is in addition to our application of responsible lending guidelines including the Equator Principles, International Finance Corporation Performance Standards and our own Social and Environmental Management System to all lending transactions.”