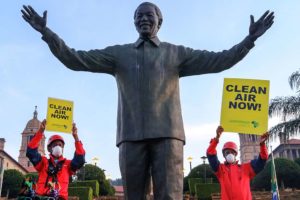 Activists from Greenpeace Africa scaled several iconic statues across Johannesburg and Pretoria this morning to demand action on air pollution. The activists fitted the statues with emergency gas masks to pressure the National Air Quality Officer to protect citizens’ right to clean air.

Famous statues of the Mother with Child at Bree Taxi Rank, Brenda Fassie in Newtown, the statue of the Miner outside the Chamber of Mines, and the statue of Chief Tshwane outside Pretoria City Hall have been given protection against dirty air by environmental activists. In total, four well-known statues across Johannesburg and Pretoria can be seen wearing masks this morning. 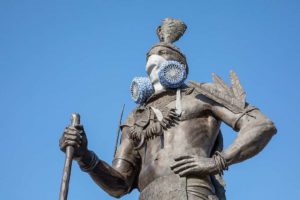 “If these statues were real people they would be breathing dangerously polluted air. In total, Eskom’s coal-fired power plant emissions are responsible for a shocking 420 premature deaths per year in Gauteng. We need to ensure that Eskom complies with our Minimum Emission Standards to protect people’s health,” said Melita Steele, Senior Climate and Energy Campaign Manager for Greenpeace Africa.

“In response to the air pollution crisis in South Africa, Greenpeace Africa has launched a Clean Air petition today, calling on the National Air Quality Officer to ensure that Eskom complies with air quality legislation. Even one premature death from air pollution is one too many. We have to act now to protect our health, and the health of our children, who are even more vulnerable to the impacts of air pollution. Clean air is not a privilege; it is a constitutional right for all South Africans,” ended Steele. 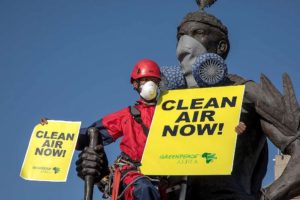