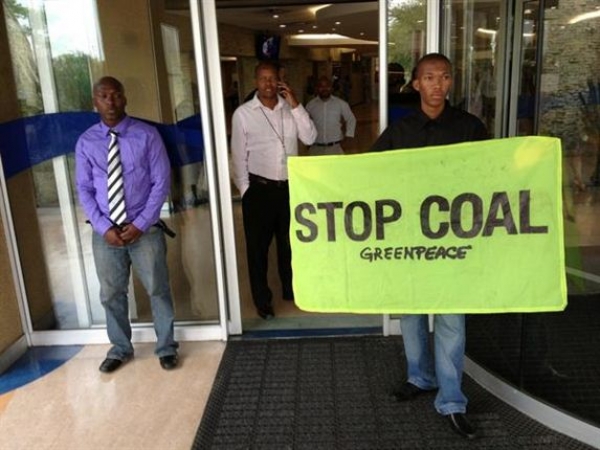 According to police, Eskom has laid the following charges against the activists: trespass, intimidation, malicious damage to property and illegal gathering.

“Our paramount concern is for the welfare of the 14 activists that are under detention. For us, the charge of illegal gathering is a serious contradiction as this refers to a gathering in a public area, according to South African law; and further contradicts the charge of trespass,” said Greenpeace Africa’s executive director, Michael Onyeka-Obrien.

At dawn, Greenpeace activists dropped a banner at Eskom’s Megawatt Park headquarters reading ‘Eskom: Under New Management.’ At the same time, activists locked themselves to the front entrance of the building, and their new management members chained themselves to a table outside the building as part of the protest.

This was followed by the arrival of approximately 20 police men and women and 12 members of the SAPS special task force. All activists involved in the protest were systematically arrested.

The activists were calling on the utlity to listen to all South Africans, and finally put the people of this country first by:

The protest at Megawatt Park comes in the wake of Eskom’s announcement of further electricity price hikes to pay for new coal-fired power stations.

Afterwards, Eskom claimed that they were working towards the same goal as the NGOs involved. However, their reckless coal expansion that is burning South Africa’s water supply and driving us towards a water crisis says otherwise.