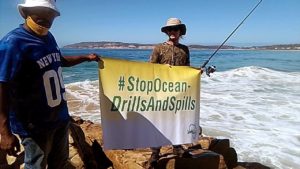 Oil and gas extraction brings nothing but environmental degradation, destroyed natural habitats and destruction of livelihoods. People should act accordingly and protect their oceans from being oil and gas exploration sites. Image: The Green Connection / Facebook

The Green Connection and its partners – small-scale subsistence fishers from around the country – have welcomed TOTAL E & P South Africa B.V’s announcement that it will postpone their application for additional drilling and associated activities in Block 11B/12B off South Africa’s south coast.

The Environmental and Social Impact Assessment (ESIA) process has also been terminated. Since the first granting of the exploration rights, and subsequent drilling of the Brulpadda exploration well, TEPSA had proposed the drilling of up to ten additional exploration wells. The areas in question are situated 130 km and 45 km offshore of Mossel Bay and Cape St. Francis, respectively.

The Green Connection’s Strategic Lead Liziwe McDaid, “TEPSA’s announcement of withdrawal can be seen as a victory for the communities and environment around the area. As Interested and Affected Parties, we have always been against any drilling for oil or gas activity in our oceans. And we have conveyed our concerns to TEPSA and the government accordingly. The potential impact of drilling and possible spillage on the ocean, coastline, and communities is absolutely catastrophic as has been witnessed by similar incidents worldwide – such as the Deepwater Horizon disaster, which happened just over a decade ago but which still remains problematic today.” 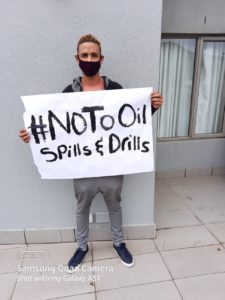 “While we are happy for the news, we are still concerned that oil and gas exploration continues in other areas since the email we received speaks of a postponement, not a cancellation. TEPSA did not provide any reasons for their withdrawal from the project, which leaves us to wonder what their future intentions are. Do they intend to return? In fact, their message was confusing in that it mentions postponing the application but then talks about terminating the ESIA process. We would like TEPSA to be transparent and give our communities some clarity about their intentions going forward. The good news, however, is that if they want to try again, they will need a further Environmental Impact Assessment (EIA),” McDaid adds.

“The Green Connection and its partners call on government to move away from fossil fuels for our future energy solutions and instead to focus on renewable energy while protecting our oceans, the environment and the communities who depend on them for their livelihoods. Civil society is having to spend large amounts of time and energy reading, analysing and commenting on large documents, potentially asking lawyers for advice to make sure that our rights are protected, that we can participate meaningfully,” adds McDaid. 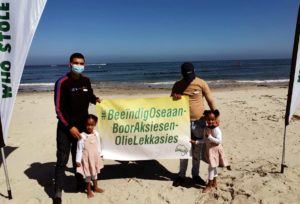 According to the Green Connection, oil and gas companies will particularly face challenges with the find on the South Coast because these are some of the world’s most treacherous waters, deep in ocean floor trenches within the westward Agulhas current, one of the fastest currents in the world where winter waves can reach thirty (30) metres in height. Under the water at depths deeper than 800 metres, things are equally treacherous as the Agulhas undercurrent flows North at some of the fastest speeds ever recorded for an undercurrent. The risks of an accident occurring in South African waters are very likely.

She adds, “The Gas to Power plant in Saldanha is another case. The Assegai project was also stopped and the EIA process terminated. Are we seeing a trend where developers realise that fossil fuels are not worth it? Do they recognise that civil society resistance is strong and will not let up, as we demand a faster energy transition, in line with the intensifying climate change crisis? Recent research determined that methane emissions from abandoned and active wells were at least 15 percent higher than previously thought. What it shows is that methane escaping from oil and gas wells undermine efforts to address climate change.”

McDaid says that the Green Connection will remain vigilant and has written to the consultants asking them how the withdrawal in block 11b/12b impacts on other drilling off the south coast.