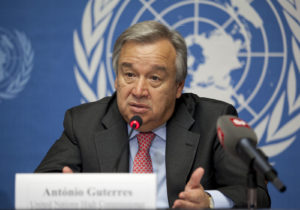 The United Nation’s (UN’s) 2019 Climate Action Summit, to be held next month, in New York, should deliver a solid plan of action to ensure radical changes with regard to climate change, says UN climate special envoy Luis Alfonso de Alba.

UN Secretary-General Antonio Guterres and De Alba will meet with world leaders at the summit.

In a statement issued this week, the UN urged governments to come to the summit with clear, concrete and ambitious plans to address the worsening climate emergency, enhancing their nationally determined contributions by 2020.

This should be in line with reducing greenhouse-gas emissions by 45% over the next decade and to net zero emissions by 2050.

The summit has been called amid rising global emissions levels. The last four years have been the four hottest on record and winter temperatures in the Arctic have risen by 3 ˚C since 1990.

This while sea levels are rising, coral reefs are dying and negative impacts on human health continue owing to air pollution, heatwaves and risks to food security.

The UN states that, if action is taken now, carbon emission can be reduced within 12 years and hold the global average temperature to well below 2 ˚C higher than pre-industrial levels and even to 1.5 ˚C above those levels.

Although the Paris Agreement is in place, setting out what needs to be done to stop climate disruption and reverse its impact, the UN says the agreement itself is meaningless without ambitious action.