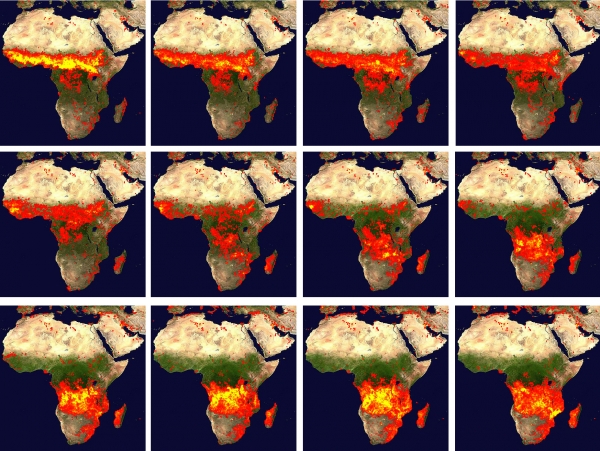 30% of the earth’s surface is affected by fire. Fire destroys forests and vegetations which are our sources of food – it is both a driver and an indicator of climate change.

When biomass is burned, copious amounts of gases and particulate matter are released, billowing smoke plumes fill the sky, and entire ecosystems can change in seconds.

“We’ve seen very saddening situations of fires, particularly in Africa, West America and the Amazon. Fires have been increasing, and have been responsible for thousands of citizens to be relocated. Enormous amounts of money have been spent on destroyed homes and property,” says Jimmy Adegoke, a climate scientist at the Council of Scientific and Industrial Research (CSIR) in South Africa. “Texas in the United States has experienced its record hottest summer this year with record heat waves, droughts and fires.”

The rate of biomass burning is expected to increase in coming years, because climate change causes hotter and drier conditions. Additionally built-up material from repeated fire suppression provides ideal conditions for fires to burn strongly when they eventually break out.

These fires can be seen from space. Using infra-red images, satellites can view the hotspots and origin of fires through dark clouds of smoke which can’t be seen with the naked eye. In 2000 NASA launched two minibus-sized satellites, Terra and Aqua, with instruments called MODIS attached to them to scan the globe daily, looking specifically for fire ‘scars’.

“In July I flew over the burning Amazon area in a 2000 kilometre smoke ball. The sun was dim and red and the sky was grey and black. Down here we think it’s bad, but if you see the fires from space you see how bad it really is and how big the affected areas are,” says Piers Sellers, research scientist for National Aeronautics and Space Administration (NASA).

“Fires change the characteristics of the ‘clouded south’. Fires affect the interaction between clouds, the sun and the earth’s surface.” Clouds play an important role in the climate system – fire emissions change the colour and optical characteristics of clouds. Instead of acting as reflectors, clouds now have much more absorption qualities.

“Solar radiation is either retained, reflected by clouds or enters the atmosphere. Mostly it warms the earth’s surface, which can result in fires.” A high frequency of fire outbreaks causes dark burnt areas which increases the absorption power of heat of the Earth’s surface.

“We are expecting a bigger release of carbon in the atmosphere due to fires,” Adegoke says. Plants grow and use CO₂ from the atmosphere to build and maintain biomass and remove CO₂.

Burning coal, oil and natural gas transforms carbon from fossil pools created millions of years ago in the Earth’s atmosphere, and affects the climate and ecosystems.

NASA satellites’ tracking of smoke plumes have clearly indicated that fires have a global effect, because their emissions get carried by wind currents.

“The major sources of fires are localised at different times of the year, but the impacts are global.” CO₂ has gone up and down, but is ultimately increasing. This affects the Earth’s sustainability potential – the ability of ecosystems to support productivity, especially in north and mid-Africa.

Fires lead to human suffering, poverty, frustration and wars on a regional and global scale.
“These effects are aggravated by societies’ lack of interest in global change issues, non-participation in mitigation effort and more biomass burning for survival.”

According to Adegeko, increased fire frequency is directly related to water and rainfall patterns. His current research looks closely at how this impacts on the seven African countries that rely on Lake Chad, which is drying up at an alarming rate. “40 years ago, it was the biggest lake in Africa, but now it is less than 20% what it used to be. This affects the livelihoods of 40 million African people.”

Satellites help scientists track from space where fires are, how intense they are, and where emissions are going in the atmosphere. According to NASA waves of fires occur each year in Africa, starting in the north and moving down to the south. “Documenting fire patterns are important, because they make up a big part of the carbon budget,” Sellers says.

“Beyond observing, the satellites provide information used to create early warning systems,” Adegoke says. Each year Eskom, which produces 95% of South Africa’s electricity and 70% of Africa’s electricity, experiences a substantial amount of down time on its transmission lines due to wildfires. “South Africa is a water-scarce country and fire poses a real threat to their people and their biodiversity. South Africa is the third most naturally diverse country in the world.”

South Africa’s geographical position gives them the advantage of being able to track satellites with an advanced capability, which has led to the development of the successful Advanced Fire Information System (AFIS).

“Not all fires are bad, some have a useful productive ecological function, but more needs to be done to manage human-induced fires,” Adegoke says. Sub-saharan Africa uses an agricultural method called ‘slash and burn’, an agricultural practice aimed at preparing land to grow crops quickly and efficiently in areas that were once forested. “A lot of unnecessary burning is done in this way and it has unintentional consequences.”

Sellers believes solutions lie primarily with collaboration with local water management and applying their technology to developing countries. “If the African continent is viewed as one unit, it will help governments make better choices.”