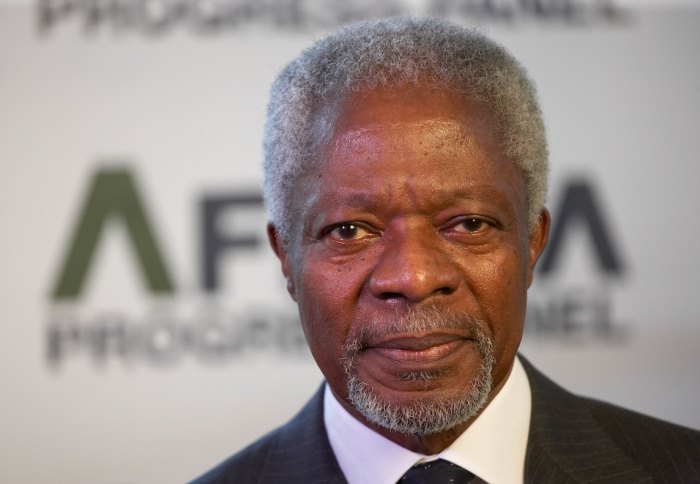 The Africa Progress Panel welcomes the commitment made by the G7 to make deep cuts in emissions and to phase out of fossil fuels by the end of the century.

In this year’s Africa Progress Report, “Power, People, Planet: Seizing Africa’s Energy and Climate Opportunities”, the Panel calls on the countries that emit the most to raise their level of ambition and implement their promises at the December climate summit in Paris. With its 2015 summit communique, the G7 has signalled its collective intention to do just that.

Stringent price on emissions – tax instead of subsidise them

Governments in the major emitting countries must now place a stringent price on emissions of greenhouse gases by taxing them, instead of continuing effectively to subsidise them, for example by spending billions on subsidies for fossil-fuel exploration. The G7’s reaffirmation of its pledge to work for the elimination of inefficient fossil fuel subsidies is thus notable. Africa is well positioned to play a leading role in the global low-carbon transition, and will be able to do so fast, if significant investments are made now. Much of this financing will need to come from rich nations. International climate financing is chronically underfunded and uncoordinated and must improve.

At the Financing Development Summit in Addis Ababa next month, G7 countries can set a clear timetable for the previously agreed US$100 billion in annual climate finance each year. At the G7 summit, leaders reaffirmed their strong commitment to mobilizing this financing. This should be used to generate clean power. Germany as the leader in clean energy globally, and current Chair of the G7, can spearhead this process. In that context, the Panel also warmly welcomes the G7 commitment to assist in the acceleration of access to renewal energy in Africa.

Kofi Annan, Chair of the Africa Progress Panel, said this after the release of the G7 communique:

Future generations will judge this generation by their actions

“I applaud Chancellor Merkel’s leadership in steering the G7 to a firm agreement to decarbonise the global economy over the course of this century. The communique’s recommitment to phasing out fossil fuel subsidies is encouraging and an essential first step to ensuring that agreement is honoured. The G7 has also heard the call from Africa and Africans to massively scale up investment in renewable energy across our continent. The G7 pledge to mobilise resources to accelerate the creation of a low carbon energy system in the region could be “a game changer”; helping Africa grow and leapfrog to a sustainable low carbon future. This is good for Africa and the global fight against climate change.”

The latest G7 communique is a clear statement of ambition and leadership from the world’s richest countries, which the Africa Progress Panel fully supports. Future generations, however, will judge this generation of leaders not solely by the principles they set out in communiqués, but by their actions. The Panel looks forward to the timely honouring of these pledges.