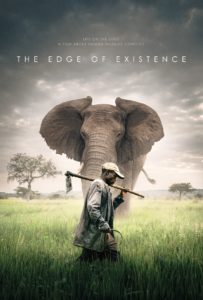 Out of 150 documentaries at the festival, The Edge of Existence – which took three years to film, with the crew sometimes spending days or even weeks trying to get a single shot – won the award for, “Best Human and Nature Film”.

Directed by James Suter and Charlie Luckock of Black Bean Productions, with Banovich Studios as an Executive Producer and the Grumeti Fund as a Conservation Partner and Executive Producer, this unique wildlife documentary highlights the complex issues around human-wildlife conflict in Africa (specifically focusing on Tanzania’s Western Corridor in the Serengeti) and delves into an issue that is quickly becoming a global crisis.

“We are delighted by the international recognition the film has been receiving. Being selected as the winner for the Best Human and Nature film for the 2020 Wildlife Conservation Film Festival, is an incredible achievement for us,” says James Suter. 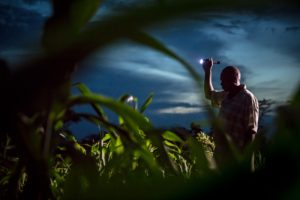 A farmer from a local village in the Grumeti Concession checks his crops at night. Crop raiding by elephants is a common occurrence in the Reserve and can severely impact local farmers who often lose a full year’s crops in one crop-raiding incident, which is heartbreaking for the farmer and his family who are dependent on their crops for their survival.

“Prior to the making of this ground-breaking documentary the story of human-wildlife conflict, especially in areas like East Africa, was largely untold,” says James Suter.

“Few people really understand the concept of human-wildlife conflict. It is a topic that only recently started to be discussed.” 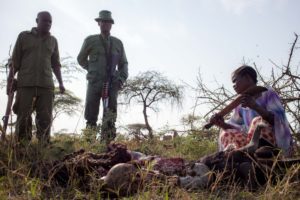 A community member from the Bonchugu Village with poached bushmeat and a panga. Members of the Grumeti Fund Anti-Poaching Unit were on scene as the Wildebeest was killed in the Grumeti Concession. Sadly, this is a common occurrence. Communities that live on the borders of the Reserve live in extreme poverty and bushmeat like this Wildebeest can help feed their families for weeks.

“One of the key things that inspired us to create this film is that we would so often hear of incidences of human-wildlife conflict and see these types of issues covered in the media in a way that was quite one-sided. We wanted to create a film that portrayed both sides of the picture – also telling the stories of the people living on the frontline of human-wildlife conflict and highlighting the scale and severity of the incidences that occur – the film offers a completely new way of looking at this.”

The documentary, with breathtaking cinematography including sweeping aerial shots of vast herds of game on the plains of Tanzania, and set against stark images of life in the neighboring villages, tells the important story of how communities and conservation are inextricably interlinked.

“Conservation used to be about keeping communities out of wilderness areas and protecting the wildlife within. However, conservationists now understand that the buy-in of communities is essential – if you want conservation to work, community members need to also benefit from conservation, e.g. through job creation and education” says Suter. 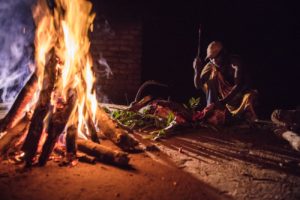 A man from a local village preparing bushmeat (poached antelope) on a fire outside his home. Preparing bushmeat right after a kill is essential to ensure that the meat is safe to eat. An antelope can feed a family for weeks and all parts of the animal will be used by the family.

“Conservation is not sustainable unless we find workable solutions to human-wildlife conflict that can support the communities affected, and no solution will be feasible unless it takes both humans and wildlife into account.”

The Edge of Existence calls on viewers to consider the communities living in close proximity to wildlife and to understand the daily challenges they face, while looking at how to protect wildlife that is impacted by communities encroaching on wilderness areas.

Suter explains that local communities living in the vicinity of wildlife areas suffer significant losses as local farmers’ crops are decimated by raiding elephants, and livestock is killed by predators.

“The situation results in a loss of income and even starvation, and in this context, it is not surprising to see poaching on the increase, reinforced by local and international demand for bush meat.” 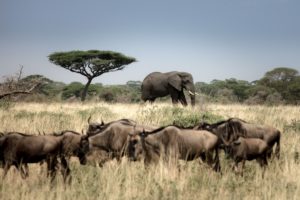 An elephant and a confusion of wildebeest in the Serengeti. The Grumeti Concession, located in the Western Corridor of the Serengeti is a stronghold for an incredible variety of species, each playing an important role in maintaining the balance of this ecosystem. The Serengeti is also home to The Great Wildebeest Migration, one of Africa’s most iconic wildlife shows.

“To get communities to support conservation initiatives we have to educate them to understand their connection to the natural world and understand that these wilderness areas are part of their natural heritage. Communities need to see a direct benefit from protected areas. There is often a belief that wilderness areas and national parks are for tourists only, but this isn’t true at all. If local communities can see the value of these protected areas and of protecting wildlife, by ensuring that conservation efforts include local communities, I believe we can promote the peaceful co-existence of people and wildlife.”

“I am immensely proud of this award and the way our team came together and worked tirelessly for years to complete a film that portrays such an important message in a way that is digestible for an audience that may not necessarily understand this complex situation which is reaching crisis level.”

“We hope the documentary will help uncover solutions whilst connecting communities, conservation authorities, and government not just in Africa, but around the world. What happens after the documentary is hugely important to us as a team – we want to see positive steps are taken that promote the co-existence of humans and wildlife. If we can educate people around the world through this film, then we will have achieved our goal,” concludes Suter.