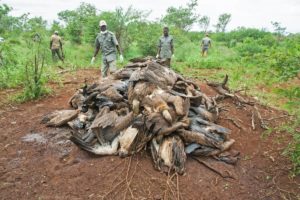 In a letter published yesterday in the journal Science, vulture researchers have raised the alarm over the relentless poisoning of Critically Endangered vultures across Africa. During the past 20 months, over 1,000 vultures across the African continent have perished due to widespread poisoning. Vultures have succumbed to poisoning in Mozambique, South Africa, Botswana, Zambia, Namibia, Tanzania, and Kenya.

Vultures are vital for healthy ecosystems and their role in rapidly consuming carcasses is both an undervalued ecosystem service as well as an iconic phenomenon of the African savannah.

Two of the most substantial poisoning threats come from poachers and traditional healers. Poachers deliberately poison vultures in an effort to eliminate them because by flying over carcasses vultures reveal the poachers’ presence. Vulture body parts are harvested unsustainably for medicinal and other belief-based uses and this is typically carried out using poisons.

Lead author Dr Antoni Margalida said, “The sustainability of free-ranging vulture populations depends on our ability to identify and mitigate existing and future threats. In this sense, African governments should prioritise the reduction of illegal poisoning related to belief-use and poaching, as well as the education of their citizens about the dangers of pesticide misuse.”

Dr Darcy Ogada of The Peregrine Fund, and one of the letter’s authors, stated, “It’s time that African governments acknowledge and address the massive problem of pesticide misuse. As poisoning continues to devastate vulture populations, the widespread misuse of pesticides seriously threatens the health of Africans, their livestock, as well as the environment that we all share.”

“Although some of the actions recommended in the Multi-species Action Plan to Conserve African-Eurasian Vultures to reduce the impact of poisoning on the continent’s vultures have been implemented in some areas in southern, east, and west Africa, a lot more needs to be done. For example, better coordination of such activities in identified poisoning hotspots, and cooperation between multiple stakeholders is needed,” concludes André Botha from the Endangered Wildlife Trust in South Africa.