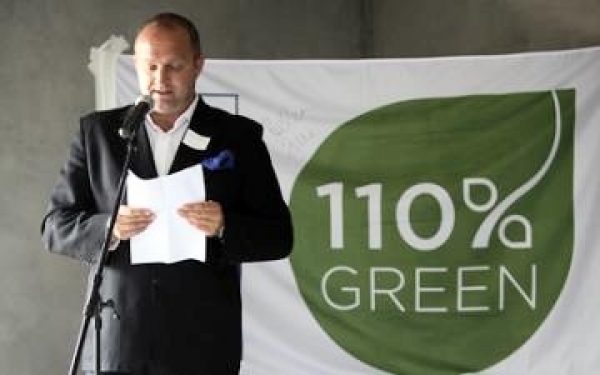 Company owners have a responsibility, as employers and as visitors on this planet to live as sustainably as possible. This is the only way we can survive long-term and hand over to our children in a responsible manner.

Mario and Annemarie Delicio of Dematech are the owners behind Hotel Verde – Africa’s greenest hotel. Dedicated and passionate about sustainability, they have transformed what was initially just a sensible business proposition into a showcase for some of the most advanced environmentally conscious technological installations as well as construction and operation practices in the world.

Construction on Hotel Verde, which is a part of the recently launched BON Hotels group, began over a year ago just outside Cape Town International Airport, with a team of contractors and experts dedicated to finding the alternative. “If you look at what can be done from a green angle you look at energy, water and waste reduction,” Delicio explains. “You then take each of these areas and work out how to implement alternatives, generating your own electricity for example. Then you need to explore the extent to which you can go.”

And the team at Hotel Verde have gone to the greatest extent yet seen on the continent – from locally sourced suppliers to sustainable practices on the building site to multiple ways in which they can generate their own electricity and reduce waste to almost zero.

green from the get-go

“We have an advantage because we are starting from scratch. We could go from choosing recycled bricks and insulation, to installing a geothermal field, coupled to ground-source heat pumps. When you build new you can plan much more than if you retrofit an existing building.”

Andre Harms, Sustainability Manager and founder of Ecolution Consulting, is a trained mechanical engineer and the expertise behind some of the more technical aspects of the building. Having spent 15 months at the South African Research Centre in Antarctica, Harms knows what it is to value everyday resources and is applying this dedication to each facet of the project. “We have the opportunity to change the status quo here,” he says. “We have looked at different ways of doing everything, right from the word go.”

This includes the photovoltaic (solar) panels cleverly positioned to provide shade as well as power. “They are mounted on the north façade of the building so as to not only generate electricity but create shading for the windows that get the most sun.”

Another is to dramatically reduce the amount of concrete required by utilising Cobiax void formers – recycled plastic balls placed strategically within the concrete slabs that are required for the various floors. They displace the concrete, saving approximately 535 m3 or 1284 ton while maintaining the structural integrity.

water & energy crucial and accounted for

Hotel Verde also boasts a sophisticated grey water recycling plant that will contribute towards a 37% reduction of potable water use.

“We have run a network of pipes through the building in order to reticulate the grey water, collect it and supply it to the toilets,” Harms explains. They will also be utilising a rainwater filtering and capture system to provide water for the car wash and irrigation. The elevators will run on a regenerative drive, which will allow for about 30% of the input energy to be recaptured and fed back into the building, and double-glazed windows with spectrally selective glass will filter out hot rays, so less heat enters the building reducing the need for air-conditioning.

In order to bypass the need for standard air-conditioning systems, traditionally one of the biggest energy consumers, Hotel Verde will utilise ground source heat pumps made by 100 holes drilled about 76 metres into the ground, where the temperature is a consistent 19 degrees Centigrade. Renowned German supplier AGO Energy will install a complex network of piping and equipment specifically designed for Hotel Verde that uses the earth as a heat source in winter and “heat sink” in summer, boosting efficiency and dramatically reducing operational costs.

“There is no other hotel in Africa that has gone to the extent that we are hoping to achieve,” Delicio says. “But going green is not just about the building, it’s about every aspect of the operation; zero waste to landfill for example. We might never reach that, but with the ideas we have in mind we will come pretty close.”

benefits for those who ‘get it’

Open to the public in May 2013, the hotel plans to incentivise guests with credit notes and bar tabs for those who utilise towels more than once, for example, or don’t use the air-conditioning. “It’s about getting customers involved and making them a part of the whole green thinking philosophy,” Delicio explains.

Guy Stehlik, founder of BON Hotels, who will manage and operate Hotel Verde, says that the value of being involved in a project of this nature, plus its learning in terms of future hotels, is invaluable. “The three cornerstones of BON Hotels are Good people. Good thinking. Good feeling. Hotel Verde and the philosophy behind it is where the Good thinking lies. This is definitely one of the most innovative hotels in the country and we are thrilled to be involved in a project of this nature.”

Despite the fact that this is the first of its kind, the Hotel Verde team doesn’t want it to be a secret; they want to share their convictions with anyone who’ll listen. “We might have the slogan ‘Africa’s Greenest Hotel’ right now, but we hope it won’t be for long,” says Harms. “We want to show the continent what can be done. We want to challenge the industry as a whole.”