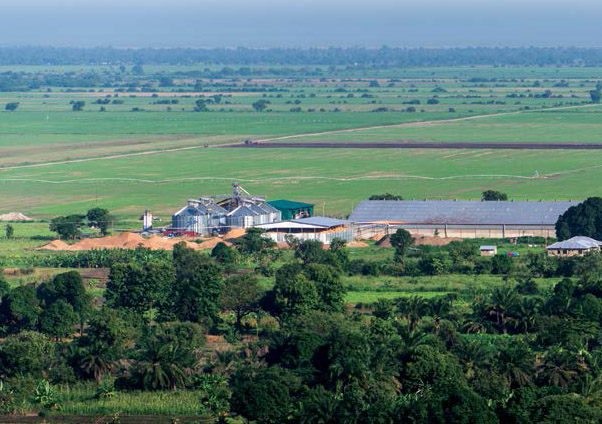 Millions of pounds of UK aid money have been invested in a project in Tanzania which is destroying the livelihoods of smallholder farmers, driving them into debt and impacting the local environment.

This according to a new report by The Oakland Institute released in collaboration with Greenpeace Africa and Global Justice Now.

The company Agrica has received millions in support from aid donors including the UK to establish an industrial rice plantation in Tanzania. The plantation has been used as a showcase project of the G7’s New Alliance for Food Security and Nutrition.

But the new report, Irresponsible Investment – Agrica’s Broken Development Model in Tanzania, documents the devastating impact it has had on local communities. Agrica is a British company registered in the tax haven of Guernsey. Anuradha Mittal, Executive Director of the Oakland Institute said:

“Although Agrica is portrayed as a responsible investment venture, its takeover of fertile land has brought misery to local communities. Labelled ‘squatters,’ smallholders were forced off the land, lost their livelihoods, received a meagre compensation for their losses, and have had to face debts resulting from doing business with Agrica.”

As part of the project, Agrica contracts small-scale farmers to grow rice for the company, but some farmers report it is difficult to make a living on the contracts. Farmers have to take out loans to purchase specific seeds and chemicals – required by Kilombero Plantations – which has led many farmers into debt. The report shows how under this scheme locals have lost control over the means of their production transforming them from farmers to labourers on their own land. One farmer said:

Locals forced into technologies and debt

“Through the contract, we were forced to accept technologies that we don’t really need to get a good harvest. All decisions about farming were made by KPL … Because I was in debt I had to do it the way they demanded.”

“Agrica peddled chemical inputs to smallholders, leaving many in debt. In an area known as Tanzania’s food basket due to its fertile soil, this uncovers the real agenda of Agrica. They have opened up new markets for the products of international agribusiness that are damaging for both people and the environment.”

Despite claims that this is the only possible model for agricultural development, the approach is deeply flawed. More effective avenues would focus on meeting the needs of the smallholder farmers and assisting them to develop appropriate farming practices. Providing support to agroecological methods would boost yields and improve food security while preventing the debt cycle that comes with the regime of intensive chemical inputs.

“This project undermines the rhetoric of aid-sponsored large-scale agricultural investments and exposes the true beneficiaries to be agribusiness multinationals rather than small-scale farmers and local communities,” said Heidi Chow, food campaigner for Global Justice Now.

The Oakland Institute, Greenpeace Africa, and Global Justice Now are demanding that all of Agrica’s investors, including the UK’s Department for International Development (DfID), cease funding and review their other agriculture investment schemes in Africa for similar abuses against farmers. A global campaign is being prepared to mobilize against such wrongdoings by international donors in the coming days.

Ed’s note. I would say they should also go and restore the land and the farmers to the natural state which they found them in in the first place. Nothing short of corrective action would suffice here.