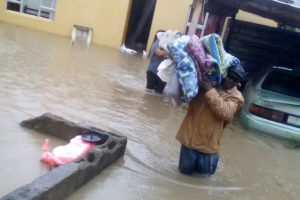 Flooding over the Easter weekend at Port Saint Johns in the Eastern Cape. Image: @BantuHolomisa / Twitter

The Alfred Nzo District Municipality on Wednesday urged residents in low-lying areas to monitor water levels and to move to higher ground if necessary.

There are a number of dropoff points nationwide for those wishing to assist the victims of severe flooding.