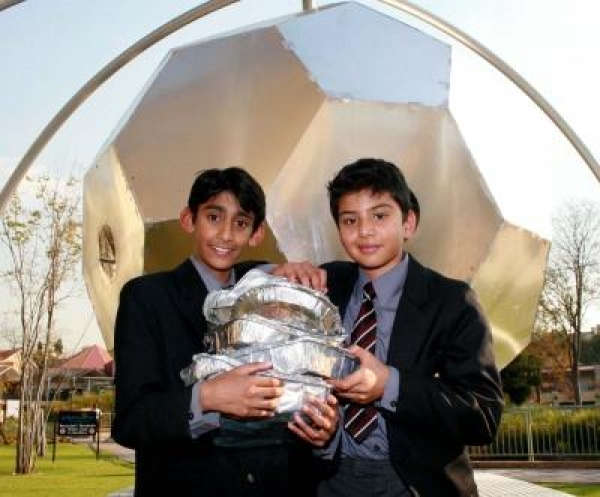 A giant soccer ball made of used aluminium foil is planned by an aluminium collection drive and competition with great prizes.

In supporting South Africa’s promise to deliver a greener 2010, the Brightwater Commons in Randburg, in conjunction with the Aluminium Federation of South Africa and Hulamin, has launched a recycling campaign for the collecting of used aluminium foil for recycling.

There is an appeal to businesses, schools, hospitals, eateries, hotels, hostels, hairdressers and the general public to assist by dropping their used aluminium foil at The Brightwater Commons’ foil deposit point, adjacent to the centre’s Woolworths store.  Large amounts of used foil from businesses and schools in the Johannesburg area can also be collected.

All the used foil collected will be deposited into the giant soccer ball structure currently displayed at The Brightwater Commons. The campaign will close on Saturday 31st July. Thereafter, all the foil collected will be purchased by Zimalco, an aluminium company division of the Zimco Group. Funds will be donated to the Lehae La Tshepo community support centre based in Windsor.

SA record to be broken

In addition to promoting an awareness of recycling, this unique initiative also aims to break the SA Book of Records for the largest amount of used aluminium foil collected. The current record stands at 732kg and the aim is to beat this by collecting 750kg.

As an incentive for the public and schools to support this recycling initiative, a competition has been included in the campaign. For every deposit of 50g of used foil, one can complete a Foil Ball Competition form for entry into a lucky draw. Prizes include R20 000 in cash, and a Chana Benni 1300cc exclusive to the value of R89 900. A cash prize of R15 000 from Zibi Environmental will be awarded to the school that collects the largest amount of used foil.

More and more people in South Africa are beginning to support initiatives that recycle paper, plastics, glass and tin cans. However, only a tiny percentage are aware that aluminium foil can also be recycled. Ready-meal containers, catering trays, pie cases, kitchen foil and dairy product lids are therefore discarded as everyday waste, although they can be reused.

Although used foil represents only a small portion of a household’s total waste, the aluminium industry encourages recycling. Making aluminium requires much energy; but smelting and manufacturing it into a ‘new’ product only takes 5% of the original energy required, thereby resulting in an energy saving of 95%. This 95% of energy saved results in a 95% reduction of production emissions, which in turn reduce carbon emissions that have an effect on global warming.

As aluminium is an element, used aluminium foil retains all its properties even after being smelted to form a new product. This means that products made from recycled foil are of the same quality as those made from primary aluminium, extracted from alumina, which is obtained from the clay mineral bauxite.

The recycling of used foil also reduces the demand of natural resources needed to manufacture new aluminium products. In South Africa, approximately 3500 tons of aluminium foil is used which can practically be collected for recycling on a yearly basis. Only a negligible amount is recycled.

Recycling of foil also saves landfill space. As aluminium foil is a metal it will gradually return to its natural state of aluminium oxide when disposed of, although this takes a long time.

Take note that crisp packets are not made of foil, but of metallised plastic film – a plastic film coated with metallic ink. They can therefore not be recycled.

When uncertain, the best way to identify aluminium foil is by scrunching it. Foil will remain scrunched, but metallised plastic will spring back.