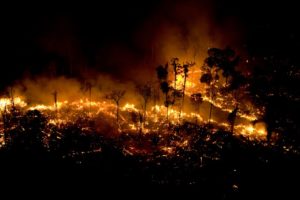 Forest fires have dramatically increased in the Brazilian Amazon this year in the wake of soaring deforestation rates, raising concerns among environmentalists about the fate of the planet’s largest tropical forest.

The number of active fires amounted to 74,155 between January 1 and August 20, a spike of 85 percent compared to the same period in 2018, according to data from the Brazilian National Institute of Space Research.

Meanwhile, the Brazilian NGO IPAM said it didn’t find any evidence to argue that the fires could be a consequence of a lack of rain.