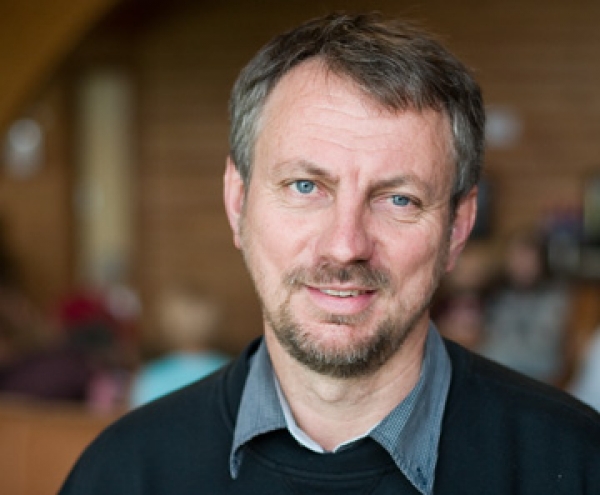 Proposing a theological engagement with a metaphor that could transcend the duality between the ‘green’ environmental agenda and the ‘brown’ poverty agenda that has disabled development discourse for the past twenty years, the late Steve de Gruche left his thoughts in a paper entitled ‘An Olive Agenda: First thoughts on a metaphorical theology of development‘ before his untimely death.

The first Steve de Gruche memorial lecture was held on 22 April at the Congregational Church in Rondebosch, Cape Town.

Steve was Head of School, School of Religion and Theology at the University of KwaZulu-Natal, Pietermaritzburg. He drowned in 2010 while tubing with his family in the Mooi River in the Drakensberg.

Here are some extracts from his work, which illustrates the passion and vision of this environmental theologian:

“The mix of green and brown suggests an olive agenda; which in turn provides a remarkably rich metaphor – the olive – that holds together that which religious and political discourse rends apart: earth, land, climate, labour, time, family, food, nutrition, health, hunger, poverty, power and violence.

Ecology is earth wisdom and ecology how we run it

An attentiveness to current debates in the field of social development would suggest that any ‘development’ programme – at local, national or global levels – is likely to collapse into the wide chasm that currently divides economy from ecology, if we fail to find an integrating vision and agenda. At heart, economy and ecology should cohere; after all they are both about the earth, our oikos, or home.

Ecology, as oikos-logos concerns the wisdom of how our home functions; and economy, as oikos-nomos is about the rules that should govern the way we run our home. Given that we inhabit only one earth as our home our economy or household-rules should be rooted in ecology, our household-wisdom; and this was in fact the case for millennia as people in diverse times and places sought to build their economic life in some kind of respectful relationship to the ecological boundaries they experienced.

It is clear, however, that the material and ideological forces that gave rise to the Industrial Revolution in Europe in the eighteenth and nineteenth centuries not only failed to see the relationship between economy and ecology, but were in fact predicated upon the divorce.

Intellectual split between nature and history

The whole point of the Industrial Revolution was to take our home, the earth, dissect it into natural resources, and then – with new forms of power – pummel it into shape as commodities to serve the market for such goods. We should not be surprised then, that this divide is coterminous with the intellectual split between nature and history, and the emergence of the natural sciences and ‘economics’ as a discrete discipline; together with the colonial conquest of the whole earth by the industrialised nations as they searched for more nature to conquer and wider markets to supply.

The Industrial Revolution has given birth to our modern global economy. We are its heirs whether we like it or not, and it has enriched our lives in many ways. From the internal combustion engines that offer us mobility, to the cell phones that keep us in contact with home; from the computer upon which I have written this essay to the insulin that my daughter injects daily via a digital pump; from the fridge which keeps our food fresh, to the micro-wave oven that warms it up for us – our lives are inconceivable without the assumptions, mechanisms and achievements of the modern economy.

Owing to its size and reach, Larry Rasmussen (in “Earth Community, Earth Ethics”) has quite properly named it the Big economy. But for all its contribution to modern life, Rasmussen notes the convincing data that indicates that there is a major problem with this economy: its logic works against the Great economy, a term he borrows from Wendell Berry (“The Art of the Commonplace: The Agrarian Essays of Wendell”).This latter economy is the oikos-nomos that sustains the earth, and has done so for thousands upon thousands of years. Both Berry and Rasmussen thus point out the absolute necessity for our daily economic life to function in harmony with the Great Economy.

Eco/nomics is the only possible way

Rasmussen writes: Economic production and consumption, as well as human reproduction, are unsustainable when they no longer fall within the borders of nature’s regeneration. So the Bottom Line below the Bottom Line is that if we don’t recognize that the laws of economics and the laws of ecology are finally the same laws, we are in deep doodoo. Eco/nomics is the only way possible.

The brown agenda is concerned with poverty. It is the agenda of many, many people in South Africa, and in the global south. It is the public agenda of the government, of business, of civil society, of the churches, and of the vast majority of our citizens, as well as being the agenda of a whole host of global players – from World Vision to the World Bank.

Given the absurdly high levels of poverty in this country, and throughout the globe, and given the dehumanisation that poverty entails, the brown agenda needs no further legitimation. Certainly from a Christian perspective we are correct in speaking of God taking sides with the poor and the oppressed in Jesus Christ; and therefore of the moral obligation of Christians to join with others in the quest to overcome poverty. The brown agenda drives us to deal with economics, for the solution lies in structuring the economy – globally, nationally and locally – so as to ‘make poverty history’.

The green agenda is concerned with the environment. It too is the agenda of many people in South Africa and throughout the world; but it is characteristically the agenda of people who are not poor. Greens are concerned with saving the whale or the rhino, protecting endemic flowers, removing alien species and preventing urbanization. But beyond the fads of suburban elites, we must acknowledge that the mature green agenda focuses on such things as climate change, access to water, reliance on fossil fuels, erosion of top soil, dumping of toxic waste and deforestation.

While we may hold that such concerns are born of the privilege that the non-poor have for thinking about things other than poverty, that in itself does not make these concerns any less correct. Any reading of the environmental data will make it unquestionably clear that these are fundamental issues that also strike at the heart of social regeneration, for they are precisely concerned with the sustainability of society into the next generation. And for those who believe that God has created the earth good, and that we human beings hold it in stewardship for the next generations, the green agenda is also of deep significance for Christian believers.

In our search for social regeneration, then, Christians and others are confronted with these two agendas – the brown agenda with its focus on poverty, and the green agenda with its focus on the environment. What will be clear upon deeper reflection, however, is that while both are fundamentally right, taken in isolation from the other, each is tragically wrong –and thus we must restate our earlier concern to integrate economy as oikos-nomos, and ecology as oikos-logos in search of sustainable life on earth, the oikos that is our only home. With William Ashworth we must speak of eco/nomics.”