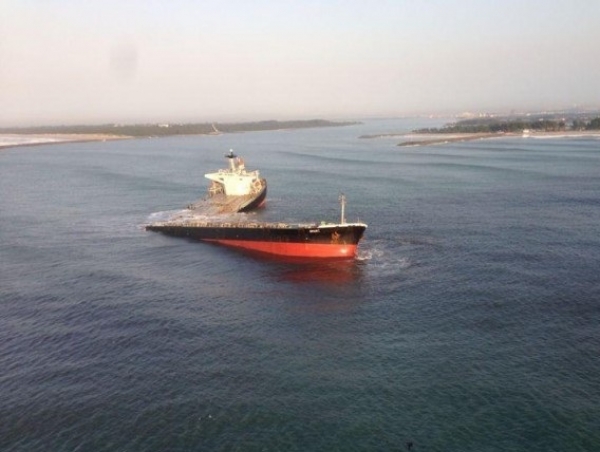 During the high seas experienced from inclement weather and spring tides, our coast is taking a hammering from the threats of sinking ships. As if the disaster off the Knysna coast is not enough, now another ship is stranded off the coast of Alkantstrand, Richards Bay. The 230m coal carrying vessel, called ‘Smart’, ran aground as it attempted to sail out of port on Monday 19 August.

The MV Smart tanker was carrying 147,650 tonnes of coal when it struck a shallow sandbank on Richards Bay coast, according to National Sea Rescue Institute (NSRI) spokesperson Craig Lambinon. It experienced engine failure as it was leaving the harbour and the rough current drove it aground. The Transnet National Port Authority (TPNA) had to send in a helicopter and rescue team to airlift all 23 crew members to safety after an attempt to dislodge the freighter was unsuccessful.

“Three TNPA tugs tried to assist the vessel but to no avail. The vessel has buckled and broken in two and is partly submerged,” said Chief Harbour Master Transnet National Ports Authority, Captain Rufus Lekala, said in a statement.

On Tuesday morning the ship had split in two and had started sinking. Now a wreck at the mercy of 10m swells, Smart is presenting salvaging difficulties. The “structural integrity of the ship was compromised,” says Lambinon. This presents a challenge with moving the wreck.

Local residents have crowded on the beach and a witness to the destruction of the Smart says the swells had “caused the ship to bounce on the sandbank and it broke its back.” Fishermen voiced their concerns about fishing operations and what impact the accident will have on their livelihood. Although the port operations were suspended for the duration of Monday due to rough seas, the harbour was reopened again. Shipping at one of the country’s biggest harbours will continue unperturbed by the carcass of the Smart sprawled nearby.

Smart was en route to China, and thus harbours 1 000 tonnes of oil on board, which presents an environmental threat. There is additional risk if the ship snaps in half completely, as coal will spill and wash ashore or sink onto the ocean bed, says Terry Hudson. 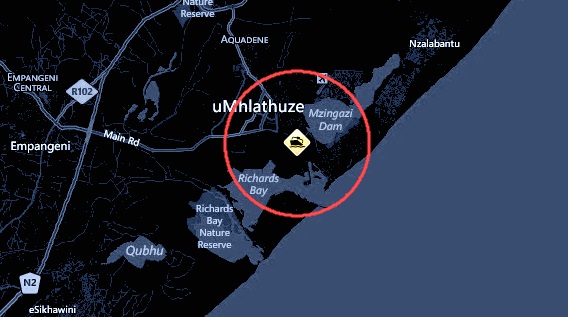 Be cautious of what you eat

Bobby Peek, ground work director, warns locals to be wary of their seafood. Bottom crawlers like crayfish and mussels should be avoided as they could be polluted by the coal that has tainted the seabed. Fish from the affected area could also be contaminated. Local residents are advised not to collect fish from the beach for consuming.

TNPA is on the scene and marine and environmental officials have been on high alert and have been monitoring the progress of the ship’s destruction. Wayne Munger, community conservation manager at Ezemvelo KZN Wildlife, says an oil spill will have a massive impact on the local environment. Peek says that the wreck poses a potential double threat.

The oil threat will affect the surface of the ocean and the coastal ecosystems. The other threat is coal; if that is spilt onto the ocean bed it will negatively impact on marine life. The currents in this bay are fast, hence any material leaked into the Indian Ocean has a big potential to spread. The Alkantstrand area seems to house sensitive marine and coastal environments.

“An oil spill will affect everything from the fish to the birds, and if it gets into the harbour or mangrove swamps it will damage the delicate ecosystems in place there,” said Munger.