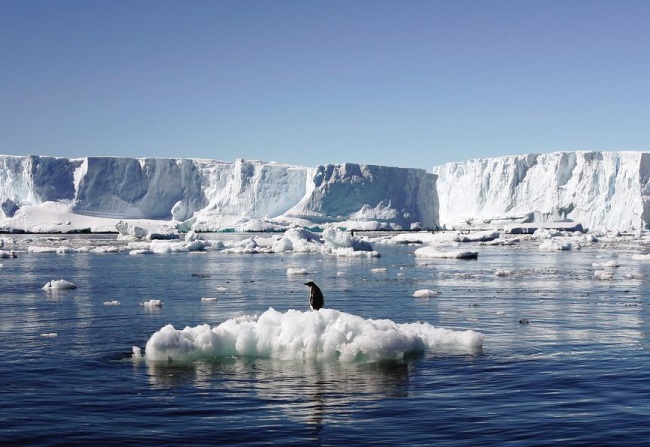 Parts of the vast ice sheet of East Antarctica – which collectively holds enough water to raise global sea levels by 53 metres – could begin an irreversible slide into the sea this century, causing an unstoppable process of global coastal destruction, scientists have warned.

East Antarctica is widely considered to be more stable than the West Antarctic ice sheet but a study suggests that a large region of the eastern ice sheet is in danger of becoming irreversibly unstable once a relatively thin section of retaining ice on its coast is lost, the researchers said.

A slab of coastal ice is all that is stopping the giant Wilkes Basin ice sheet from slipping into the sea. Once this process begins it will relentlessly continue to pour vast amounts of water into the oceans for centuries to come, raising global sea levels by between three and four metres, they said.

Once uncorked the bottle empties out

“East Antarctica’s Wilkes Basin is like a bottle on a slant and once uncorked it empties out,” said Matthias Mengel of the Potsdam Institute for Climate Research in Germany, and lead author of the study published in the journal Nature Climate Change.

“The East Antarctic ice sheet has long been considered to be stable even under a warmer climate, in contrast to its West Antarctic counterpart. We have now shown that this may not be true,” Mr Mengel said. 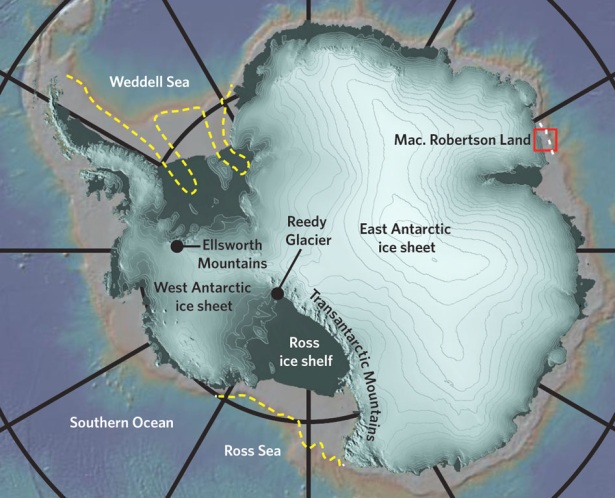 “This implies that the future sea-level contribution of the East Antarctic ice sheet may be significantly higher than previously estimated. This is important for the millions of people who live on the coasts. Every centimetre of sea level rise on top of what is already expected is going to be even more difficult to adapt to,” he said.

“By emitting more and more greenhouse gases we might trigger responses now that we may not be able to stop in the future,” he added.

East Antarctica holds about 10 times the volume of ice than is smaller West Antarctic cousin. Much of the ice in the east lies at high altitude and is kept well below freezing point, but a large proportion of it – enough to raise sea levels by 19 metres – lies on bedrock that is below sea level, such as the Wilkes Basin.

However, the analysis of the underlying bedrock on which the marine ice sheet of Wilkes Basin stands suggests this is not the case. The scientists found that the rock, which is below sea level and therefore more vulnerable to climate change, becomes a raised ridge at the coast which allows the ice to form a protective plug between the ocean and the ice sheet on the land behind it.

Computer modelling shows that if the local ocean temperatures around the East Antarctic rise as a result of global warming, the ice plug will continue to melt to a point where the “bottle” of ice held within the Wilkes Basin becomes “uncorked”.

“Once started, it becomes unstoppable. At the moment it’s still stable but if it melts then the ice plug alone will result in a global sea-level rise of between 5 and 8 centimetres, but the ice that it will release is going to cause 80 times that amount of sea-level rise,” said Professor Anders Levermann of the Potsdam Institute.

“The bottle is so much bigger than the cork and these plugs of ice on the coast are so much smaller than the ice that they are keeping in place,” Professor Levermann said.

The Intergovernmental Panel on Climate Change (IPCC) said that estimating future sea-level rise was one of the most difficult areas to predict, partly because of the unknown effects in the Antarctic.

In its last report, published in March, the IPCC said that Antarctica’s total sea level contribution would be up to 16cm this century, but if half of this ice loss occurred in the ice-cork region, the irreversible discharge of Wilkes Basin ice into the sea will begin, Professor Levermann said.

“Unfortunately we don’t know whether we’ve initiated this process yet. It’s fair to say that if we continue unmitigated climate change and global warming then we’ll destabilise parts of Antarctica and trigger a discharge of ice that will not stop for centuries,” he said.

“It may not be an imminent threat but it will change the planet and will have an impact on global culture because of the huge loss of the cultural heritage of the people living near the coasts,” he added.

“We have probably overestimated the stability of East Antarctica so far….Until recently, only West Antarctica was considered unstable, but now we know that its ten-times-bigger counterpart in the East might also be at risk,” Professor Levermann said.