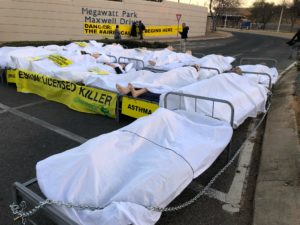 Anti-pollution activists from Greenpeace Africa have completely blocked the entrance to Eskom’s Megawatt Park headquarters with a makeshift emergency hospital scene to highlight the premature deaths and diseases caused by Eskom’s polluting coal-fired power stations. This follows Greenpeace India’s release of a new study detailing the world’s worst sulphur dioxide (SO2) hotspots[1], revealing that the Kriel area in Mpumalanga is the second worst SO2 pollution hotspot in the world[2].

“Time after time the data analysis confirms that South Africa is in fact in the midst of an airpocalypse. Eskom’s coal addiction and its refusal to comply with air quality standards[3] is seriously damaging people’s heath. There are very real casualties from Eskom’s chronic air pollution, with disease and premature death the tragic outcome. We are here today to say that enough is enough,” said Melita Steele, Senior Climate and Energy Campaign Manager for Greenpeace Africa.

The activists arrived at dawn and set up a full “hospital” scene to blockade the entrance to Eskom’s headquarters. The scene is complete with “patients” in the hospital beds and “doctors” to attend to them. The hospital beds are chained together and activists chained themselves to their beds to prevent their removal. Eskom’s Megawatt Park signs were adjusted by the activists to read: Megawatt Park, Maxwell Drive, The airpocalypse begins here, and the hospital beds were labelled with the plethora of diseases caused and exacerbated by air pollution[4].

“Eskom must take responsibility for its deadly air pollution and commit to full compliance with our Minimum Emission Standards. There is no doubt that the levels of sulphur dioxide pollution in Mpumalanga are as bad as the levels of nitrogen dioxide, and the common denominator is Eskom’s 12 coal-fired power stations in the province. Today’s protest is a reminder that real people are living in the midst of an air pollution crisis, and are paying the price for Eskom’s pollution with their health, and in some cases, with their lives. Even one premature death from air pollution is one too many,” continued Steele. 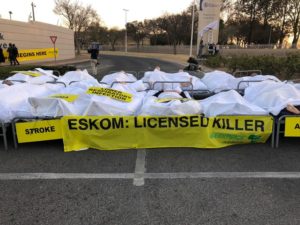 While Mpumalanga is clearly a deadly air pollution hotspot, Limpopo’s air quality is also under threat from its coal-fired power stations, with the Matimba area ranked as the 7th worst SO2 pollution hotspot in the world. The fact that the majority of Eskom’s highly polluting fleet of coal-fired power stations is located within 100km of the densely populated region of Gauteng, is a particularly troubling public health concern.

“Greenpeace Africa believes that it is unfathomable that, as the picture of air pollution in South Africa becomes more grim by the day, the National Air Quality Officer, Dr Thuli Khumalo, is even considering weakening the country’s SO2 limits[5]. South Africa has the most polluting cluster of coal-fired power stations in the world, creating unprecedented levels of deadly air pollution. There can no longer be any doubt: this is an emergency. It is time for Dr Khumalo and Minister of Environment, Forestry and Fisheries, Barbara Creecy, to act like it by ensuring compliance with the Minimum Emission Standards and stricter air quality standards to protect people’s health,” ended Steele.