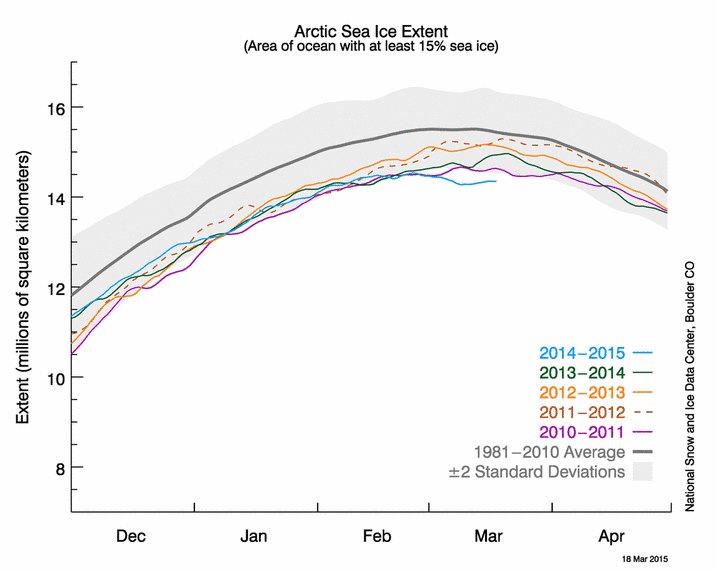 Graph shows Arctic sea ice extent as of March 18, 2015, along with daily ice extent data for four previous years. From the NSIDC analysis.

This year’s maximum Arctic sea ice extent was the lowest in the satellite record and occurred 15 days earlier than the average date for the period from 1981 to 2010, reported NASA and NSIDC.

The sea ice cap of the Arctic appeared to reach its annual maximum winter extent on Feb. 25, according to data from the NASA-supported National Snow and Ice Data Center (NSIDC) at the University of Colorado, Boulder. At 5.61 million square miles (14.54 million square kilometers), this year’s maximum extent was the smallest on the satellite record and also one of the earliest.

Arctic sea ice, frozen seawater floating on top of the Arctic Ocean and its neighboring seas, is in constant change: it grows in the fall and winter, reaching its annual maximum between late February and early April, and then it shrinks in the spring and summer until it hits its annual minimum extent in September. The past decades have seen a downward trend in Arctic sea ice extent during both the growing and melting season, though the decline is steeper in the latter.

This year’s maximum was reached 15 days earlier than the 1981 to 2010 average date of March 12, according to NSIDC. Only in 1996 did it occur earlier, on Feb. 24. However, the sun is just beginning to rise on the Arctic Ocean and a late spurt of ice growth is still possible, though unlikely.

“The winter maximum gives you a head start, but the minimum is so much more dependent on what happens in the summer that it seems to wash out anything that happens in the winter,” said Walt Meier, a sea ice scientist at NASA’s Goddard Space Flight Center in Greenbelt, Maryland. “If the summer is cool, the melt rate will slow down. And the opposite is true, too: even if you start from a fairly high point, warm summer conditions make ice melt fast. This was highlighted by 2012, when we had one of the later maximums on record and extent was near-normal early in the melt season, but still the 2012 minimum was by far the lowest minimum we’ve seen.”

The main player in the wintertime maximum extent is the seasonal ice at the edges of the ice pack. This type of ice is thin and at the mercy of which direction the wind blows: warm winds from the south compact the ice northward and also bring heat that makes the ice melt, while cold winds from the north allow more sea ice to form and spread the ice edge southward.

“Scientifically, the yearly maximum extent is not as interesting as the minimum. It is highly influenced by weather and we’re looking at the loss of thin, seasonal ice that is going to melt anyway in the summer and won’t become part of the permanent ice cover,” Meier said. “With the summertime minimum, when the extent decreases it’s because we’re losing the thick ice component, and that is a better indicator of warming temperatures.”

Here is the analysis released by the US National Snow and Ice data Center (NSIDC) on 19 March 2015: 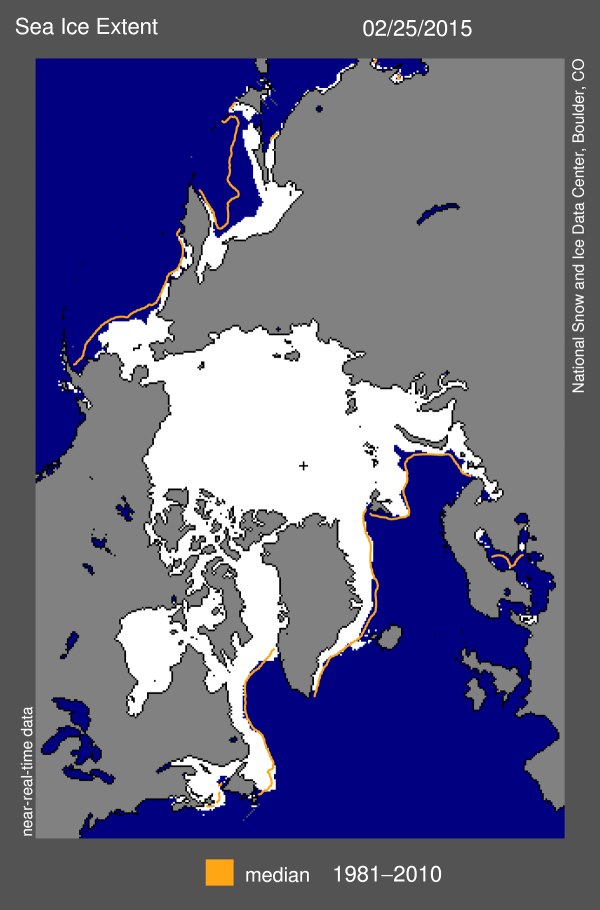 Arctic sea ice extent for February 25, 2015 was 14.54 million square kilometers (5.61 million square miles). The orange line shows the 1981 to 2010 median extent for that day. The black cross indicates the geographic North Pole. From the NSIDC analysis.

On February 25, 2015, Arctic sea ice extent appeared to have reached its annual maximum extent, marking the beginning of the sea ice melt season. This year’s maximum extent not only occurred early; it is also the lowest in the satellite record. However, a late season surge in ice growth is still possible. NSIDC will post a detailed analysis of the 2014 to 2015 winter sea ice conditions in early April.

Because of the variability of ice extent at this time of year, there can be some delay in pinpointing the date of the maximum extent, as was true this year. NSIDC calculates daily ice extent as an average of the previous five days (see the Sea Ice Index documentation for more information), and we also look for a clear downward trend for a number of days.

While the downturn in extent was quite pronounced on February 25, the trend subsequently flattened. This is in part due to recent ice growth in the Bering Sea, partly balancing continued ice retreat in the Barents and Kara seas. Over the next two to three weeks, periods of increase are still possible. However, it now appears unlikely that there could be sufficient growth to surpass the extent reached on February 25.

Over the 2014 to 2015 winter season, sea ice extent grew 9.91 million square kilometers (3.83 million square miles). This was substantially less ice growth than last year, which saw record growth over the winter. Part of the explanation for the record low maximum lies with recent weather patterns. February was characterized by an unusual configuration of the jet stream, leading to warm conditions over the Pacific side of the Arctic that maintained low sea ice extent in the Bering Sea and the Sea of Okhotsk.

Furthermore, since the last half of February through the middle of March, the Arctic Oscillation was in a strongly positive phase, with index values exceeding 5.0 for several days in the first week of March. This has been expressed as a strong Icelandic Low, a semi-permanent area of low atmospheric pressure found between Iceland and southern Greenland and extending into the Barents Sea. The strong Icelandic Low led to a pattern of surface winds over the Barents and Kara seas with an unusually strong component from the south.

For more information about the maximum extent and what it means, see the NSIDC Icelights page.