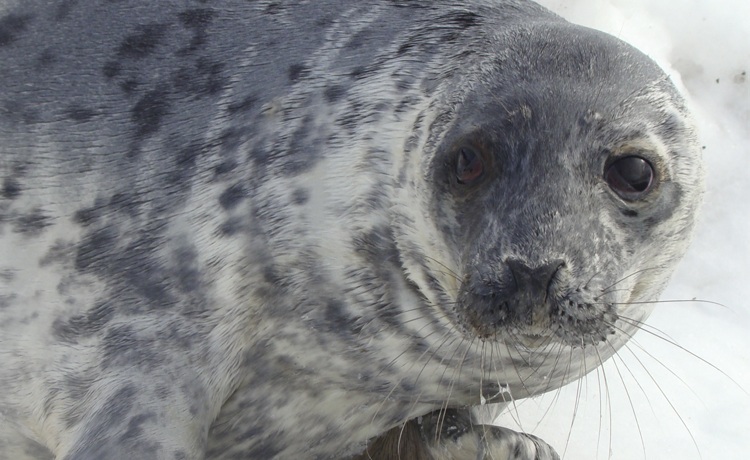 In recent years, the Arctic has been warming at an unexpected rate — faster than anywhere else on the planet. This has boosted the melting of ice on land and covering much of the Arctic Ocean.

The result: Animals are becoming infected with new diseases.

That erosion has introduced marine mammals to at least two novel infections, notes Michael Grigg. As a parasitologist, he studies such infectious agents at the National Institutes of Health in Bethesda, Md.

One of the newly identified parasites had been frozen safely away from grey seals in Canada’s Hudson Bay. But no more. In 2012, about one in every five healthy-looking grey seals born on Hay Island there died.

It turned out that a parasite had destroyed the livers of 404 pups and two adults. Grigg described the event, February 13, at the annual meeting of the American Association for the Advancement of Science (AAAS).

Grigg and his coworkers investigated the parasite. Shaped like a crescent moon, this creature had infected about 80 percent of another species — ringed seals. It didn’t sicken them, although it does get into their cells. But their bodies jail the parasites in cysts. Once inside, the parasite can do no further harm.

Grigg’s team has named the newfound parasite Sarcocystis pinnipedi. In the grey seals it triggers inflammation that damages tissues. Their bodies had not seen the microbe before and hadn’t developed the ringed seals’ protection against it. Grigg said that in time, grey seals will adapt to the parasite just as ringed seals have.

Researchers had noticed parasite-filled cysts in ringed seals before. But because it seemed harmless, no one probed to investigate what it did. But then the parasite started killing other species, including endangered Hawaiian monk seals and a Steller sea lion.

At that point, Grigg and other parasitologists were invited in to figure out why. Genetically, the organism resembles a parasite that infects dogs, Grigg discovered.

He now thinks that climbing temperatures and melting ice may have encouraged grey seals to follow fish north. This brought them into ringed-seal territory. The researchers don’t know how the parasite is transmitted. They suspect, however, that grey seals may pick it up from the infected scat of a ringed seal.

Because polar bears eat seals, Grigg’s team now plans to see whether dining on infected prey can spread the infection to bears.

From cats to whales — and people

Seals aren’t the only marine mammals becoming exposed to new parasites. Beluga whales in the Beaufort Sea, north of Alaska, have been picking upToxoplasma.

Cats are the natural host for this microbe. Indeed, as many of half of all housecats may carry the parasite. Just one infected cat can shed up to 100 million oocysts. It’s the infectious form of the parasite. (That’s why people often pick up the parasite when handling kitty litter.)

Freezing is one of the few things that can kill the parasite, Grigg says. In his lab, they store the organism in sulfuric acid. That actually makes it more infectious. Killing it usually requires freezing or boiling.

A warming Arctic means that the parasite can now survive further north than it has before. The researchers don’t know how it might affect whales. But it presents a clear danger to the native Inuit people who eat whale meat, reported Grigg and Stephen Raverty, a veterinary pathologist at the University of British Columbia in Canada.

AlthoughToxoplasma is usually harmless to healthy people, it can cause miscarriages in pregnant women. And for people with a weakened immune system, the infection can be deadly.

Indeed, toxoplasmosis — the disease caused by the parasite — is a leading cause of death from food poisonings in the United States. And babies born with the disease face an another problem. As they grow older, they can develop blindness, mental retardation and seizures.

In one Inuit village, four of 30 babies born in 1987 were infected with Toxoplasma at birth, Grigg says. That’s about 30 times higher than the rate of infected newborns elsewhere in North America. For those Inuit women, the leading risk of infection came from carving meat and eating dry seal meat, Grigg says.

Since some of these communities eat meat from locally caught whales, including belugas, this may point to one source of this dangerous infection in people.

No one is sure how marine mammals, such as whales and seals, become infected with the parasite. However, outside the Arctic, Grigg estimates that between 40 and 60 percent of marine mammals may be infected with Toxoplasma. And in some areas off of the California coast, data show, rainwater contaminated with oocysts from cat feces appears to be a source of the Toxoplasma killing sea otters.

Other problems from a changing climate

The seal and beluga parasites may be just the first of many other diseases that might attack new hosts with a melting Arctic, Raverty says.

Making direct connections between climate change and health is difficult, says Sue Moore. She’s a biological oceanographer at the National Oceanic and Atmospheric Administration in Seattle. Moore says that she and other scientists want to better understand how parasites and warming are affecting sea life. Already, some clues are emerging.

The year-round sea ice that used to cover much of the Arctic Ocean has been shrinking dramatically. Just since 2007, the area covered by this ice has shrunk by half, Moore reported at the AAAS meeting. This ice has been habitat for many predators, such as walruses and polar bears.

They used to sit on the ice until they were ready to catch a meal. Now they have to wait between meals on the shore. One side effect of this: Adults of both species are becoming skinnier (from traveling farther to get a meal). Another effect: The females are giving birth to fewer young.

And skinnier adults may be more prone to picking up disease or suffering more dramatically when they get sick.

Uncovering any link between Arctic warming and wildlife health probably will require that biologists and climate scientists team up, Moore says. Unfortunately, she notes, “right now the people who know about how warm water moves up the coast aren’t talking to the people who know what’s going on with the animals.”