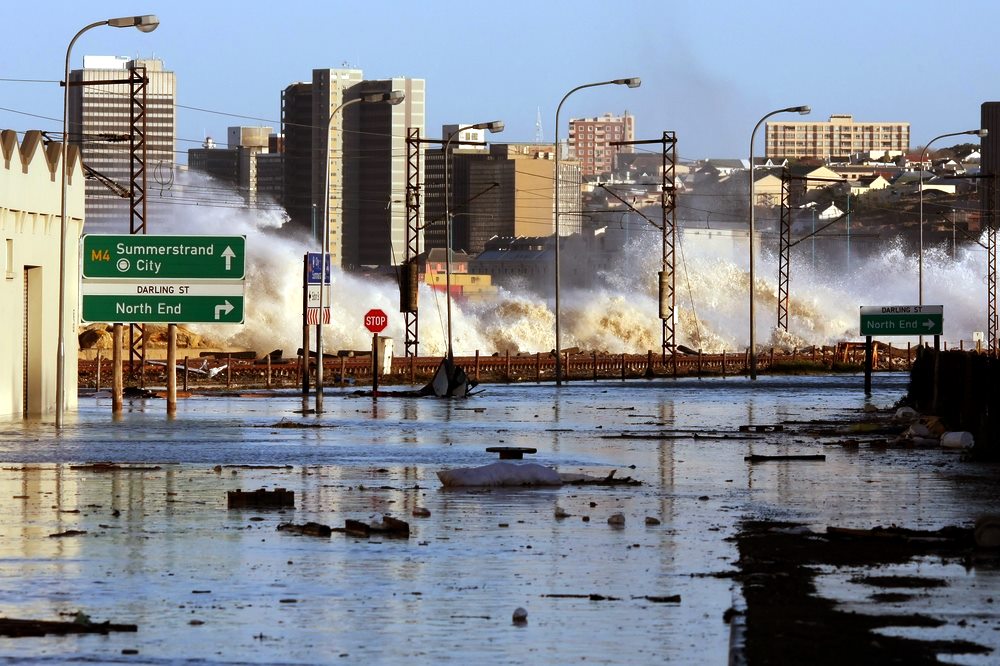 Hi, I am Greengo Blarr. Some might say I am out of this world. I visited Earth a month ago, interested in what you call ‘life’ and ‘dancing’. My sizeable, green feet and hands, big nose and sad eyes are only visible to Earthlings with a certain intelligence. Intuition lead me to a large building in downtown Johannesburg.

‘Morning. Any ideas for the next weeks?’ Every Monday’s question, accompanied by the removal of black-rimmed reading glasses.

‘The Life-and-Lipo Expo is in five weeks’ time. Nothing much until then,’ answers the tight-fitting jeans, with ponytail bobbing.

‘People, circulation is under pressure, we need a rabbit to pull out of next week’s hat!’

‘Ah, a poet! Let’s do a Green supplement for the Expo, featuring lots of Green retailers: Green advertisements, Green copy … ’

‘Thank you, oh poetic one, but wait, I sense a strange presence here today,’  answers the cyclist-to-work-and-back, looking at me, not seeing me clearly.

‘Listen, why don’t you join some Green guerrilla group to satisfy your cravings? Meeting’s over, suggestions for next week on my desk by end of business, today. When?’
‘Today.‘

I slipped out, passed security effortlessly and teleported myself to a press conference at a university over the ocean…

‘Ranked 128 out of 132 countries surveyed on the EPI 2012, we have South Africa,’ says the Yale spokesperson, standing at the podium in a grey jacket and jeans, addressing a packed auditorium. ‘The Environmental Performance Index, published by our Centre for Environmental Law and Policy, ranks these countries on 22 performance indicators across ten policy categories’ 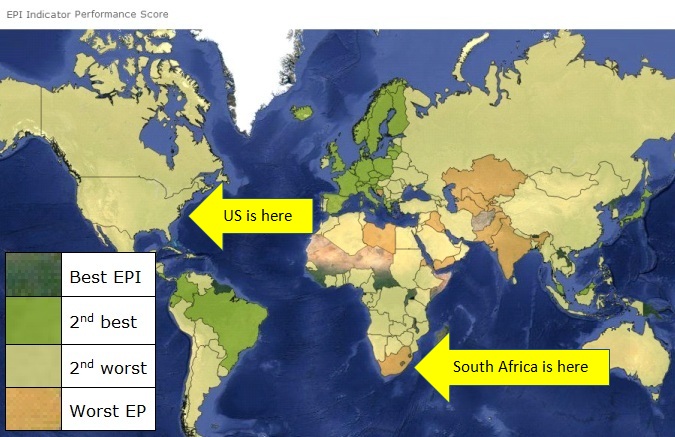 Quite a few people noticed me – I decided to stand still next to a plant, as the World EPI map flashed onto the screen.

‘By 2020 almost 70% of malnourished people on Earth will live in sub-Saharan Africa and South Asia, according to Agri-pedia of the University of the Free State.

South Africa represented 0.5% globally and 19% of Africa’s economic output in terms of Gross Domestic Product, during 2009 (International Monetary Fund), while it contributed 1.5% of the world’s and 40% of Africa’s carbon emissions (US Energy Information Administration).
The Climate Action Partnership, comprising eight influential South African conservation NGOs, says that South Africa could be one of the countries worst affected by Climate Change, e.g. 30% decrease in rainfall by the mid-21st century, with droughts, floods and the intensity of storms increasing.’

Drooping shoulders, I left – more questions than answers. Yearning for truth, no, wisdom, I teleported to Cape Town, my green feet leading me into a bar…

‘Hey, Cyril, did you know that North American tribes tested all decisions against the Seven Generation Principle, having to benefit at least seven future generations?’

‘Ja, Nige, you know, they didn’t have our advanced planning tools, hey. Have you ordered our take-aways?’

Rewind to October 2011: press conference, sleeping guards at the entrance of a massive, white building, around the corner from the pub.

We feel that this White Paper initiates a new paradigm for South Africa, in anticipation of COP17, which is to happen later this year, in Durban.

Are there any questions from any stakeholders present?’

‘I’ve got a number of questions, actually,’ says a final-year journalism student, cyclist-to-university-and-back, commencing employment in Johannesburg from 2012.

The student smiles at me as I am sitting in the corner, seeing me clearly.

‘The White Paper appears to focus on one-way information transfer. My questions are: Why has dialogue not been invited, and why is the mass media apparently excluded as a possible partner?’

Fast forward to 2013. I am browsing the Department of Environmental Affairs’ Climate Change Awareness Campaign, launched before COP17, housed at www.climateaction.org.za. The latest ‘Newsroom’ entry is dated 25 November 2011.

Alongside me appears a twelve year-old child researching the White Paper for school.

‘You know, Greengo,’ says the kid, ‘I first read Shelley Smith’s Global Media Journal article (African Edition). She argues that the South African News Media has not given the White Paper much airtime.’

‘And what has your own research revealed?’

‘I looked at News24 and browsed through the websites of the Mail & Guardian, Sowetan and Business Day. Most of them contained menu-items leading to Environmental affairs, with a variety of reporting across Earth matters. However, not one of them has dealt with the White Paper after 2011, or attempted to frame their reporting accordingly.’

‘Smart you are,’ I replied, not understanding much of what the kid was saying.

‘My parents showed me where to look, but didn’t tell me what to find, I guess.’

Qualms before the storm …a tempestuous tango perhaps?

Four people eye each other at a Spring Ball: a government official, member of civil society, media reporter and NGO-sector worker. Dark clouds are building outside, driven by a howling wind. The band’s been playing for four decades, a little louder every year – who will ask whom to tango?

Elsewhere, a child and a green person walk hand-in-hand on a cobblestone path into an inner city park, celebrating what nature can be …

you and I
experience
many countless
billions of births

positively
only for some
not for bottom billion leper-crawling

my daughter
for
president

Werner is a writer, business consultant, singer-songwriter, husband, father, universal lover and so on.

You can find him at: