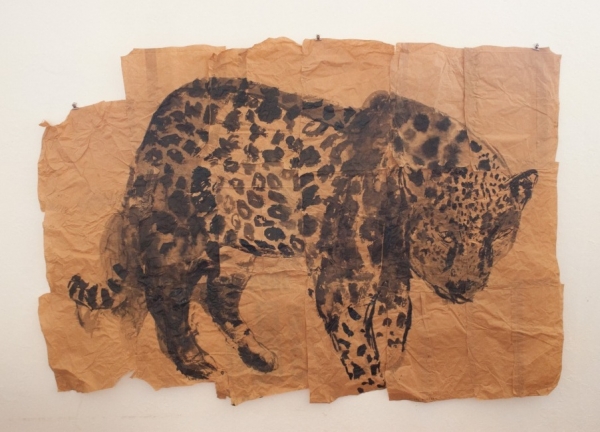 The Landmark Foundation is currently hosting an art exhibition at the Grahamstown Arts Festival. A life-sized leopard is on display, which was crafted by some talented young students out of gin traps and scrap metal. Other artists have also donated works for raising awareness and funds for leopard conservation.

A young man was brought into the biology class room at the end of a talk about the Landmark Foundation’s Leopard & Predator Project, a project for saving predators’ biodiversity within SA’s agricultural and protected land.

His art teacher said – “do you think you can make something like that?” Two years later Apex of Evolution was complete. Welded from gin traps and scrap metal by Roberto as a seventeen year old, a leopard was recreated in steel against the trappings of the world. Scar Tissue, a life size man stood next to it. The question boiled inside – “what is humanity doing ?”

A chance meeting with artist Simon Max Bannister and Silent Scream was born. It was donated to join the other works in raising awareness and funds for leopard and predator conservation. Simon’s sculpture brings up the essential question of “why”. Why does humanity accept and allow these traps when the cruelty is so obvious? Working on Landmark’s Leopard and Predator Project, economics is often given as the answer.

50-90% reduction in losses to predators

This is from the side of the farmer, the retailers and the consumers who buy the products in the end. It is the foundation’s hope that economics, as well as ethics, will drive the change in predator management. The farms involved in this project have seen a 50 to 95% reduction of losses to predators, when wildlife friendly methods have been used. These methods shift the focus away from indiscriminately killing all predators to protecting sheep, just as we would protect our homes and businesses, from theft. 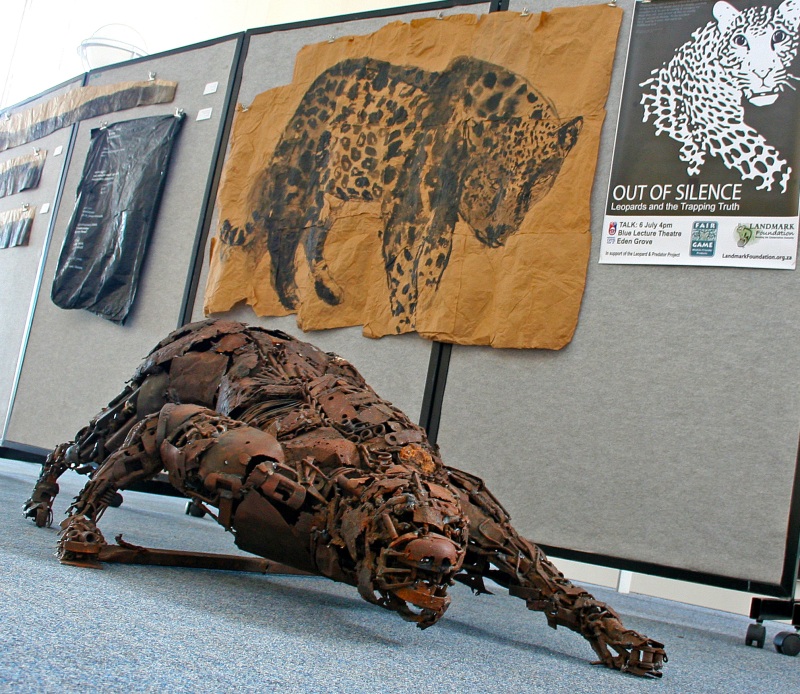 For many people, the issue of where food comes from, as well as the ethics around its production, are of growing importance. Landmark Foundation is creating a brand Fair GameTM for wildlife-friendly livestock farmers to be recognised and for consumers of meat, wool and mohair to be able to make choices with their purchasing power.

As a young consumer and city person Elsabe Milandri’s works pose the question “can we really afford to throw these guys away?” Created on old throw away papers and plastic, her Haiku’s are about her struggle: being aware of the issues around trapping, but not wanting to face them. Her inspirational last exhibition, ‘Disappearing animals,’ was about a young mother looking at animals with new eyes.

This is where personal choice comes into it. By seeing the issues for what they are, change can happen. Like the pieces of cement bag glued together to form the canvas for the ink drawing of the leopard called “Pieces”, we can recreate landscapes for leopards by connecting their isolated populations with wildlife-friendly farming corridors. This connection happens on land but also in the minds and hearts of people who care.

Keeping grace and beauty in tact

A sheep farmer, Mr David Kingwell, and his neighbour, lived deep in the Karoo near Graff Reinet back in the sixties. They decided to start a conservation committee. His young son was excited about this, as he loved the bush and watching the wildlife on their farm. One day, Mr Kingwell brought home a Black Eagle caught in a gin trap on their farm.

His son looked at him and said, “Maar Pa, ek dog ons was die BewaaringsKommittee?” (“But Dad, I thought we were the Conservation Committee?”).

Mr Kingwell looked at his son and said “You are right.” That day he stopped indiscriminately killing predators on his livestock farm. He fortified his kraals and used a rudimentary poison collar on the sheep, so that only a problem predator that bit at the sheep’s neck, would die. He farmed successfully for another 20 years with minimal losses to predators, allowing nature to live in balance on his property.

What the Landmark Foundation wishes for, is that the viewers who encounter this exhibition, as well as the farmers that the foundation works with and all the people that they speak to, all become strong enough to grapple with the truth. Their hope is that people will feel empowered to speak and act and live in ways that help our world to thrive, with its natural grace and beauty intact.