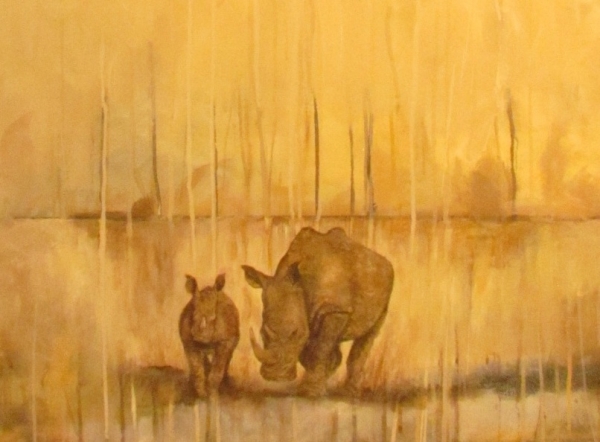 A picture says more than a thousand words. Personally I feel that eco art should play a much stronger role in getting our urgent environmental message across than currently happens in our country. Our future demands that – our hearts need to be stirred by all means possible.

Why are our musicians not taking up the cause, the artist illustrating our problems, the poets not writing more about our earth in peril? The role of art in social commentary is very close to my heart and we simply cannot rely on the scientists to communicate the facts in their often dry and technical ways. We need to speak to the creative, spiritual side of our nation too to stir the pot so that we can help brew a future of awareness, compassion and mindful living.

Celebrating the Soul of our Ecosystem is an art exhibition with a mission to help save our threatened rhinos. In the light of the devastating rhino massacre a group of artists gathered at the Oude Libertas Art Museum, Stellenbosch, to speak up through their art. Sculptors and painters illustrated the impact that these rhino murders have on them. Through exposing the violence, greed and apathy of our race they hope to bring attention to our shortfalls, so we can be pro-active in preventing the genocide of this megalithic species.

Art and conservation speak to the soul

“It is rare that we can at an art exhibition talk about our passion, which is conservation. It is a wonderful blend, as both elements speak to the soul. But the title of this exhibition refers to the importance of preserving our ecosystems, which is the focus of our Foundation, specifically across international boundaries, recognising that nature knows no boundaries. So we are proud of the transfrontier conservation areas, who jointly manage ecosystems on both sides of boundaries, as opposed to being limited by artificial political borders, which were drawn up in 1884 by the colonialists.”

He referred to the trend that currently two rhinos are killed per day in South Africa, so every 12 hours a rhino goes down. In the broader Africa the large rhino population has declined by 90%. Black rhino in 1960 there was over 100 000 and today there’s about 2000. There are many reasons for this, but the fundamental reason is that there’s more and more people and we are in competition for the shrinking resources. And in this case also resources that are being used for other reasons.

Africa’s resources are being grabbed

80% of Africa’s population is still dependent on forests and we have a big impact on forests and vegetation. Africa is also the last frontier for oil, gas, mineral, timber. We see almost a repetition of this grab for resources happening currently – all over Africa. Especially your Asian countries are there first and foremost. It doesn’t mean the Americans or Europeans aren’t there, but there’s a lot of exploitation going on.

He told the story of how Dr. Ian Player with Operation Rhino had saved the rhino from extinction once before between 1961 and 1972 growing their population from 100 to 19 000. But what’s happening now with our rhino population? In 2013 the latest statistics indicate 553 rhinos have been killed this year. So there is this incredible jump from 2008 and we need to try and understand the reasons for this. 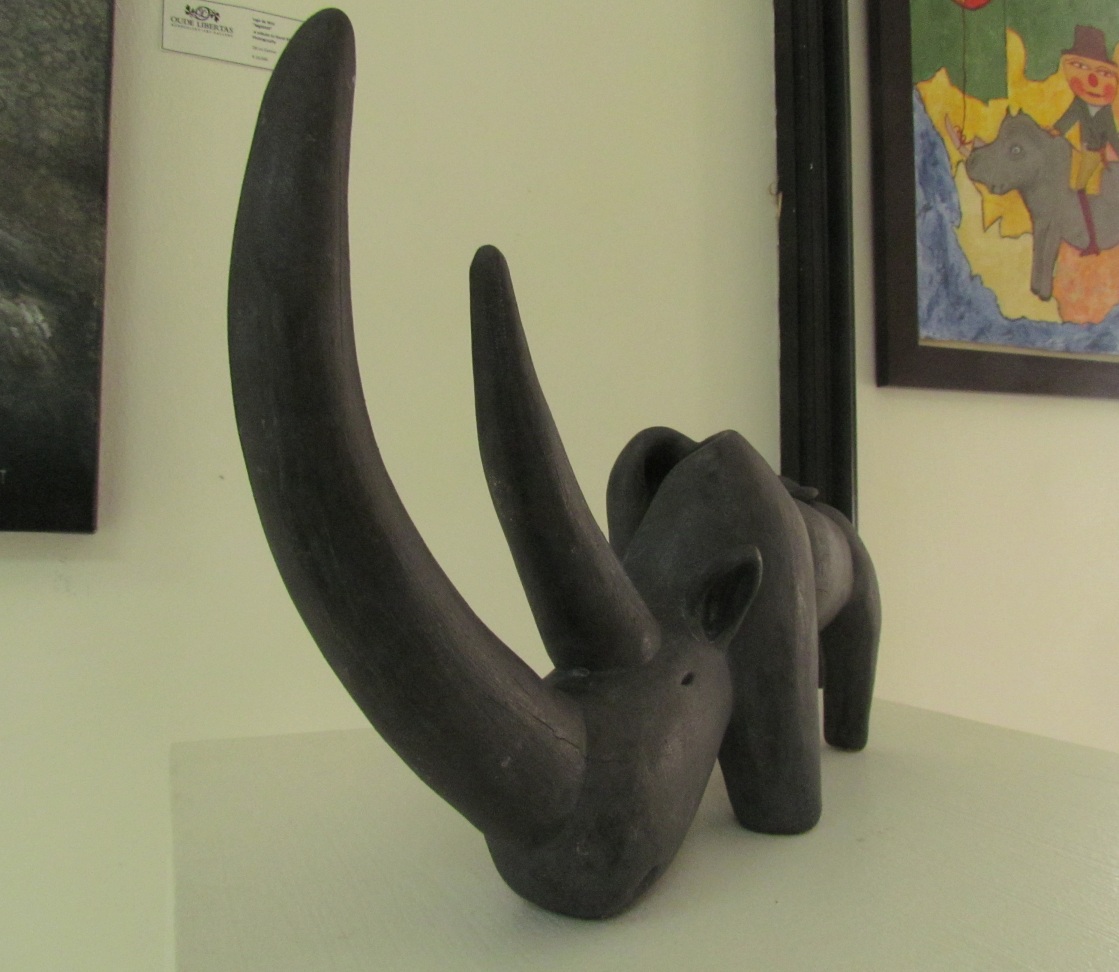 What kick started it was that a senior official in Vietnam who claimed he was cured from cancer because he used rhino horn. From that point the threat started. Unfortunately it is now also included in a fashionable concoction that they make in some of the Asian countries, especially Vietnam. Over there if you have a rhino cocktail, you really have arrived. So it’s become a fad as well.

It’s not only for medicinal purposes – for the rich it’s a fashion drink and for the ill a wonder drug to cure basically everything. High blood pressure, fever, stomach aches, and so not as much as you think as an aphrodisiac – this is not its main purpose. This is a worrying trend and much needs to be done to stop that.

What is being done?

“There are people out in the bush, the paramilitary patrols, with a gun trying to control the frontier. And there are many programmes where if you share information with the police, there are rewards and incentives for people who actually make arrests. For example in Mozambique if you catch a poacher, take him to court and he’s prosecuted there are excellent rewards. Large intelligence networks are gathering information behind the scenes. But awareness raising must never be under-estimated. There is a very famous basket ball player in China called Yau Ming – a big guy of 6ft5, who joined the cause against wildlife poaching. Last year alone, because of this superstar saying it’s bad to eat shark fin soup the importation dropped by 75% in one year. The people around the parks should also be made aware.

There’s a lot of talk about legalising rhino hunting, to control it and for the funding to go towards conservation. Then there’s rhino horn treatment, where the idea is to decrease the value of the product. So they inject the horn with indelible dye and a substance which makes the consumer ill if he ingests it.”

He closed by saying that every visitor to the Parks and other contributions towards conservation helps – and hopefully all the stories which we publish also make a difference.

We were moved by incredibly works of art who expressed the feelings of the artists. These are the voices of several artists who have moulded striking artworks, casting their message into a strong visual form.

‘Flat line for the rhino?’ by Anita Van Zyl

South African artist Anita Van Zyl says there is a lot of hype around saving the rhino, but a sustainable solution is the one which will work and now there are various proposals of what to do to stop poaching. Therefore HOPE: “people working together and hopefully succeeding in saving this amazing animal creates HOPE. The red line which is associated with a heart monitor “flatline” and death/distinction gets a new sinus rhythm when something is done – when people work together and a new rhythm is established and life brought back – and there is HOPE – for the rhino and perhaps spreading out to more….” 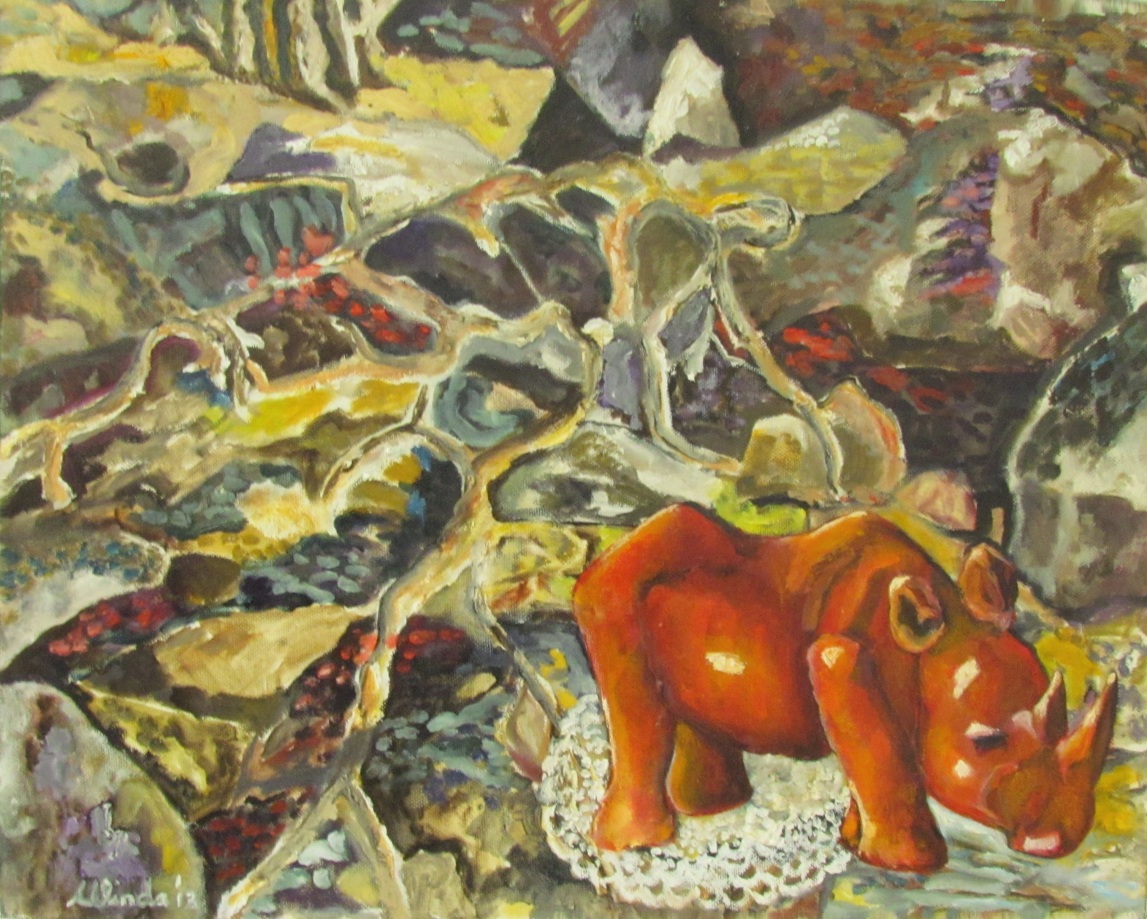 ‘How humane is it to be human?’ by Nicolene Swanapoel

Nicolene’s background as a vet helped her to see how humans use animals for food, vaccines, medical research, cures and “ailments for human vanity.” Her sculpture, ‘Rhino’, dramatically exaggerates the size of the feature we attribute most to the rhinoceros: its horn.

“For me, more importantly, they are used as cultural symbols, or rather, animals are employed as vessels/bearers of human culture. I investigate how contemporary and historic human utilization and exploitation of animals reflects similar intra-specific behaviour – how our attitudes towards animals mirror our often ‘inhumane’ attitudes to each other.”

‘Made in China’ by Ulinda Theron

Ulinda verbalises the process of her art piece ‘Made in China’. “We are all so overwhelmed by the news of the slaughtering of our rhinos that the images of blood in nature are just too vivid. So that was the starting point of this painting. I first painted the background to show our precious land with blood footprints all over and the paint marks show the damage to our land. The question that many people struggle with is what will happen when there are no rhinos left? Will the legacy of the rhinos manifest in rhino ornaments which are “Made in China”? Will the only thing left for us to do be to import ornaments from the same area that import our rhino horn? Maybe dark humour, or is there a little bit of truth in this?” 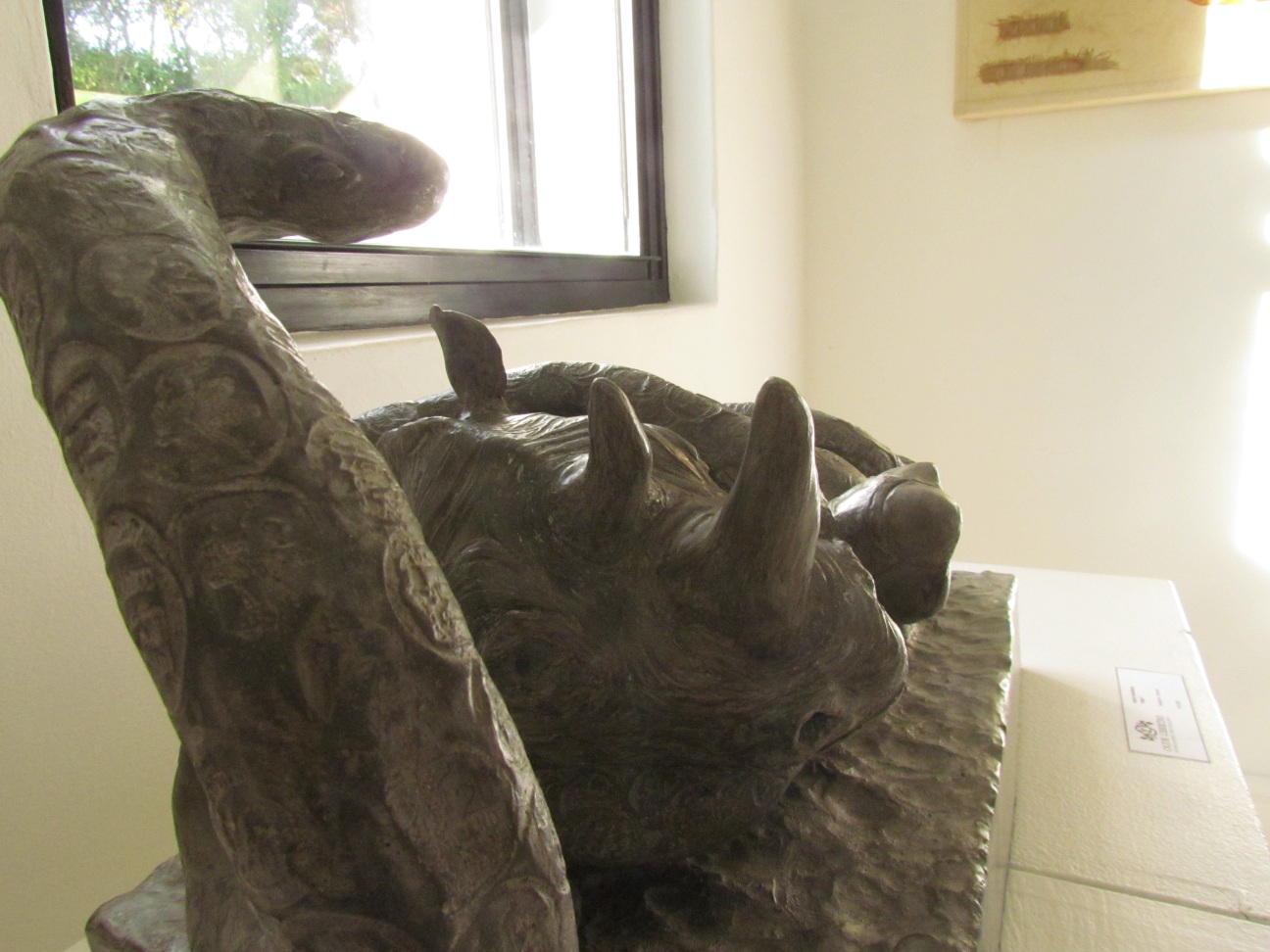 Gerda talks about her artwork ‘Help!’ which depicts a snake twisting around a helpless rhinoceros. “I consider this absurd wiping out as a monstrous money snake that keeps the trade alive. Although the rhinos are unaware of the danger, I think everyone having empathy with them, fear that they are so threatened and taken in an evil grip that all that is left for them are struggle, scuffle and a worldwide resounding call, ‘Help!’”

“We just cannot tolerate that fact that these exceptional animals can be slaughtered for their horns.” 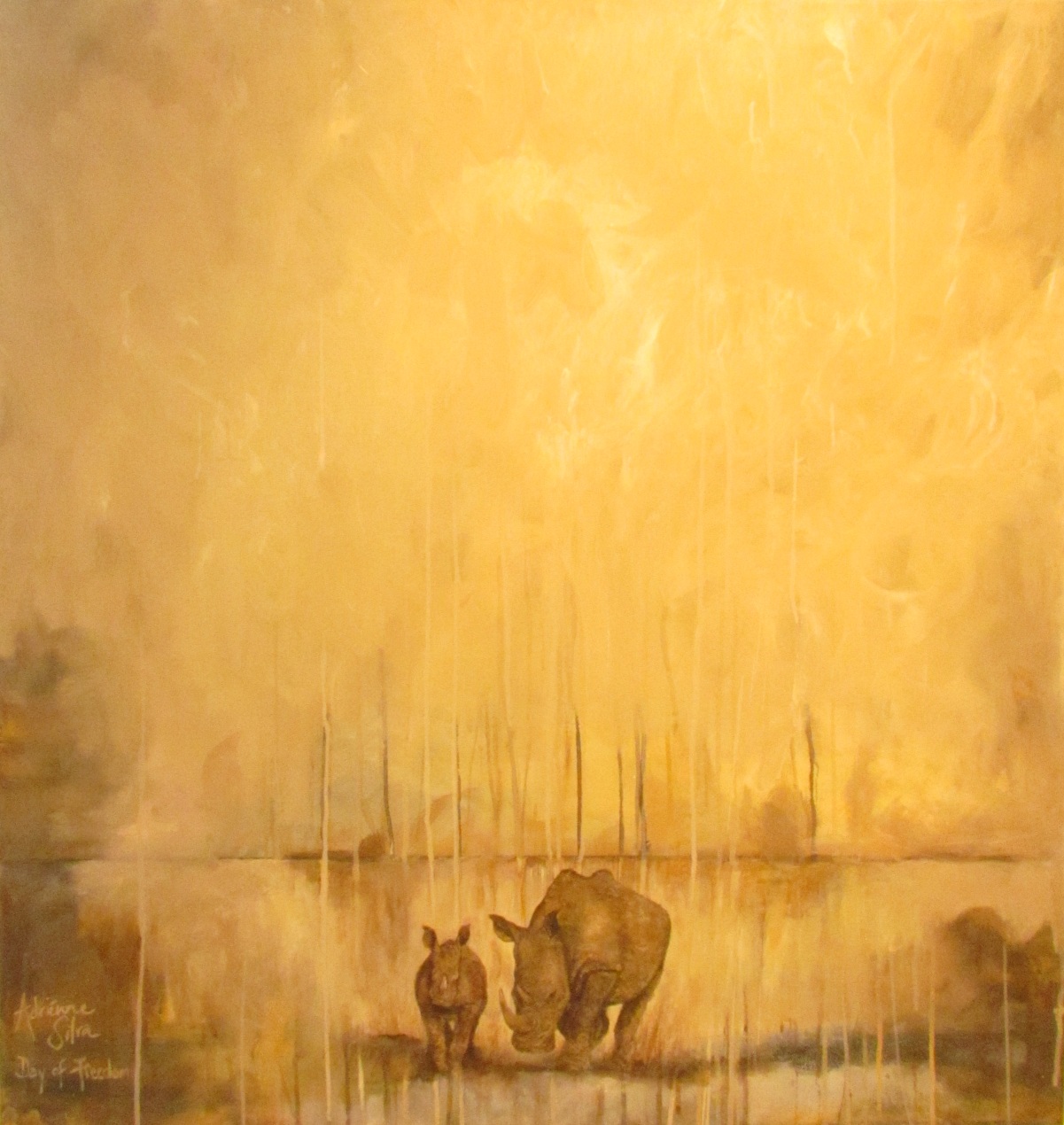 ‘Days of Freedom’ by Adrienne Silva

Adrienne chooses the expressionist approach to communicate a feeling of liberation for the Rhino and her calf in ‘Days of Freedom’. This artwork represents peace rather than violence, a glimpse into a world of how free the rhino’s should be. The light seemed to capture the mood in the bush. “I was inspired to complete this oil painting when I stumbled upon Tim Jackson’s photo of a Rhino and her calf,” Silva says.

“The serious loss of our eco-system hit me right where it matters most.” 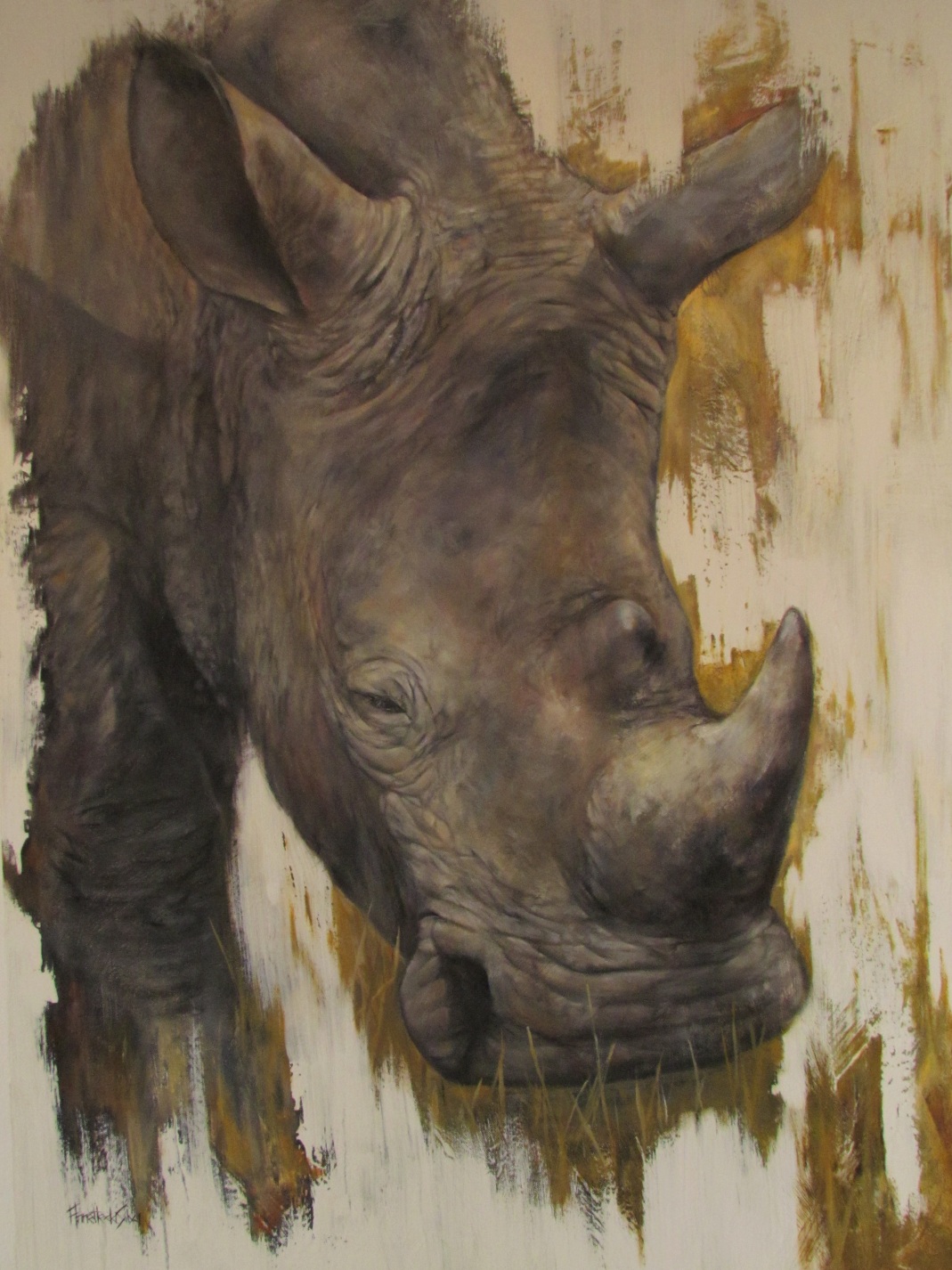 ‘A whiter shade of robust’ by Annette Da Silva

Annette shares a heartbreaking story of her experience working towards the Rhino Conservation exhibition to present her artwork ‘…a whiter shade of robust’.

“When I heard about this exhibition I felt compelled to do a painting that would make the beholder stop and see a clear message! The image had to have a strong presence and I worked hard to portray the rugged, textured outside but yet to give a glimpse into the quiet but stately “inside” of this awesome beast.

I had a lovely surprise as this project dragged me along onto a new journey of “seeing” deep into colour and “fetching” an exciting range of shades as I shaped the form while layering colour upon colour! I was absolutely terrified when I started using huge strokes of white to wipe out a large section of the oil painting I had created with so much care……and suddenly – the serious loss of our Eco-System hit me right where it matters most! That was the moment I had to put the brush down – because the boundaries of the beautiful lines in front of me were being washed away by my own tears as I sat down and wept bitterly…..” 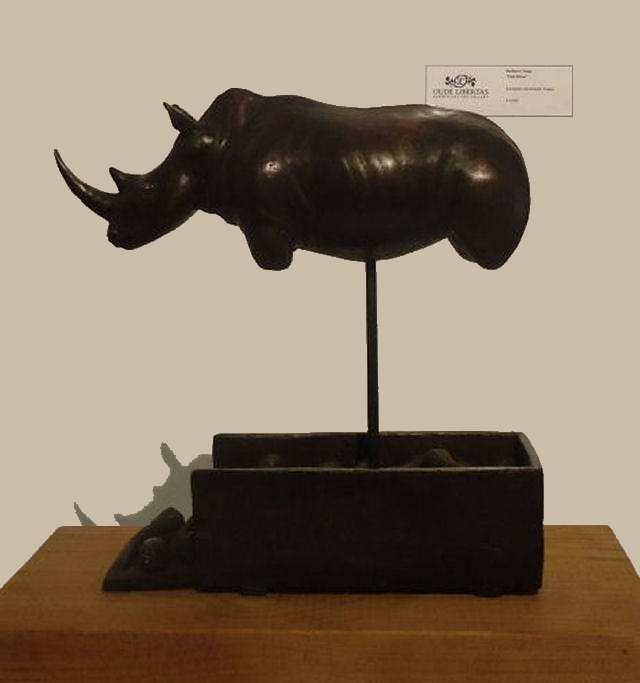 Elske’s rhino sculpture consists of two forms – a stylised rhino suspended above a boxed shaped container filled with sawn off rhino horns. The beautiful form of the rhino is celebrated and contrasted against the crude sight of amputed horns. The sculpture raises awareness of mans behaviour and attitude towards nature and each other, and can be ordered in resin or bronze.

The exhibition is on until Saturday, 7 September. Les Sharpe, William Kentridge and Horste Klemm have kindly donated their works to the Rhino Foundation, should they sell during the exhibition. Take a drive out to this beautiful gallery and feast your eyes on art with an important message.