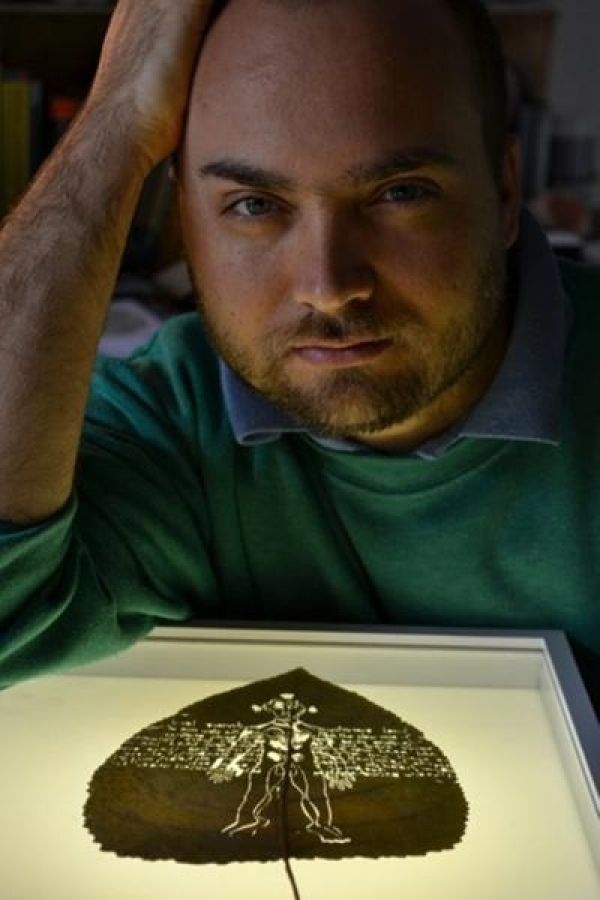 This year’s Design Indaba from 25 to 27 February saw an unusual and thought provoking exhibition by contemporary artist Kai Lossgott. He focuses on exploring green politics and systems theory throught the mediums of performance, peotry, motion images and drawing.

Selected as one of three artists presenting their work on the Absa stand, his exhibit showcased his engravings in plant leaves, as well as experimental films and prints.

In a fragile yet powerful statement, he has made minute incisions, punctures and impressions into the tissue of plant leaves to form texts and images which are only visible against the light.

Displayed in light boxes, the perforations gleam like sparks. One of his texts makes reference to “the inheritance of light”: 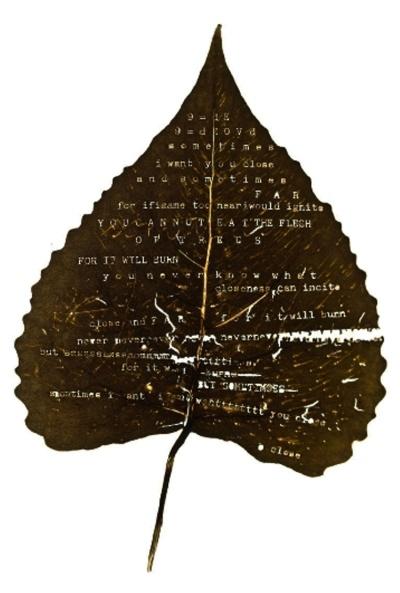 ‘For every branch in a tree / are a million ungrown branches,’ reads another, hinting at the potential rediscovery of missing connections.

‘Kai’s work exhibits an extraordinary sensitivity. Delicate and contemporary, the intricacy of his impressions on the plant leaves offset the harder, solid sculptures of the other two artists, ‘ says Cecile Loedolff, curator and director of the ABSA Art Collection.

‘We select our artists for Design Indaba from those who have been part of the Absa L’Atelier, a platform for young artists. Kai’s softer images make a huge statement against the other works and show fine art work in a uniquely different medium. Showing these contrasting pieces reinforces the links to nature and the human being.’

The artist represents a generation that knows that the problems of the world will not be solved with the way of life that created them. His work re-invigorates the forgotten links to the living systems human survival depends on. Always beginning with the notion of truth as neural sensitivity, he searches for the vulnerable instincts which drive our spoken and unspeakable language patterns.

The body is his instrument and bridge between the sensory realms of the art forms he has specialised in. Over the years, the book, the written word and the networked system have emerged as potent elements of his iconography.

Lossgott’s work embodies a global shift in identity, from regarding humans as the centre of existence (anthropocentrism) to beginning to see intrinsic value in all living things (biocentrism). He pushes the limits of our understanding of intelligent life. 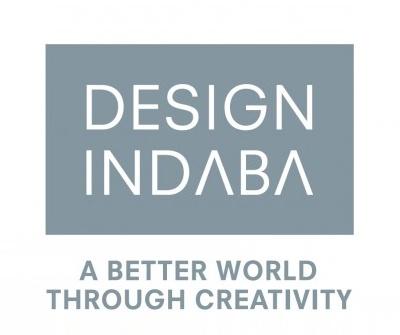 “We have certain features in common with plants,” says the artist. “We develop in symmetry, with a form of skin, branches and capillaries containing blood or sap. We both perceive a diurnal and seasonal progression in the body. A plant perceives in the way human skin perceives. It scars, it heals. It remembers.”

As a filmmaker turned artist, Kai works to transcend the limits of the industrial process and re-invent the language of cinema. His short experimental films, sometimes years in the making, combine motion photography with the graphic qualities of drawing and animation.

He is the curator of the CITY BREATH Festival of Video Poetry and Performance (2010), initiating and bringing together short interdisciplinary and experimental films from four South African cities. It has been well received both in South Africa and internationally.

A selection of the films was screened at the British Film Institute in London (May 2010), then went on to numerous popularly and critically acclaimed screenings in South Africa, Europe and North America. The artist is also known for his public performance collaborations, and most recently with choreographers on a series of short screen dances.

Since 2004, Kai Lossgott’s work has been shown at the Sasol New Signatures, ABSA L’Atelier Awards, Brett Kebble Awards and Thami Mnyele Awards. Before Design Indaba he had recently exhibited at the Oude Libertas Gallery as part of the multiple-location VANSA Winelands VAN-Guard, as well as a collaboration with Lyn Smuts at the SASOL Museum, both in Stellenbosch. In November, one of his films was exhibited at the COP16 climate negotiations in Cancun, Mexico. In January, he has screenings coming up in Belgium, the USA and China. 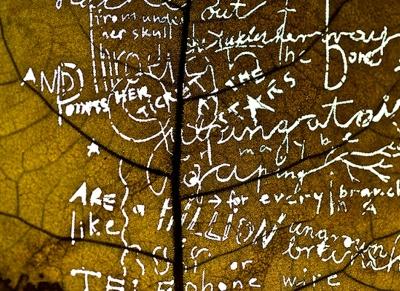 Plants plan for the future

In ‘the aperture of chlorophyll,’ a fragment from a poem is typed on a small plant leaf, an intricate drawing laser-engraved on another. In the digital light and shadow of the colour LCD screens behind them, these perforations gleam and flicker. Kai Lossgott‘s latest work merges his plant leaf engravings with his experimental films – motion photography combined with the graphic qualities of drawing and animation.

Influenced by global evidence of climate change, we are currently re-defining our collective and personal identities. As we begin to realise we are part of a living system, we ask: what is the borderline of intelligent life?

Plants, for instance, store and process information in sophisticated ways, communicating chemically with their environment. They are capable of learning, and plan for future environmental conditions. Their functions for respiration, digestion, cell growth, reproduction and immunity are comparable to ours.

Plants see with their skin

With this meditation on photosynthesis, the artist revisits his idea that plants see with their skin. Like human skin, light sensitive film or paper, or a digital camera CCD, plants absorb light. They do this in the red and blue regions of the visible light spectrum through the pigment chlorophyll. (Green light is not absorbed but reflected, making the plant appear green.) Through this process leaves convert solar energy intro the nutrients and oxygen human and animal life depend on.

The light-sensitive pigment chlorophyll has in fact no opening regulated like a camera’s aperture stop or the human eye’s iris to adjust the amount of light or dark required for the perception of images as we know them. Although they perceive light, plants ‘feel’ more than ‘see’ it.

Plants use the same molecules and pathways to drive their circadian rhythms as humans and animals. Lossgott explores the subtle changes in mood, heart rate, breath and mental activity that occur in humans with the coming and going of day and night. Awake or asleep, we have more in common with our distant evolutionary cousins than we know.