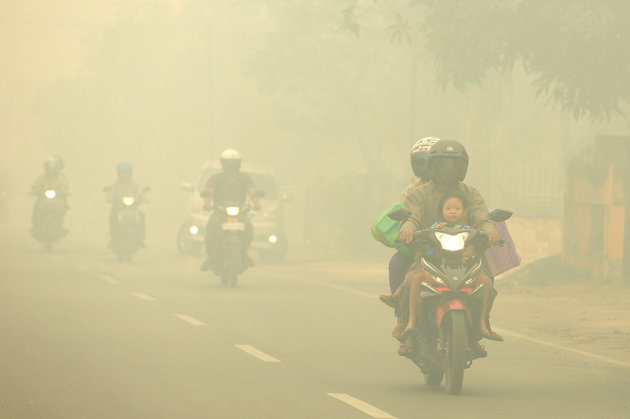 Motorists ride on a road as thick haze from forest fires shroud the city in Palangkaraya, Central Borneo, Indonesia, Tuesday, Oct. 27, 2015. The haze has blanketed parts of western Indonesia for about two months and affected neighboring countries like Singapore, Malaysia and Thailand. Image: AP Photos

In the midst of its worst fire crisis in living memory, the Indonesian government is taking a leap backward on forest protection. The recently signed Council of Palm Oil Producing Nations between Indonesia and Malaysia, signed at the weekend in Kuala Lumpur, will attempt to wind back palm oil companies’ pledges to end deforestation.

This is despite Indonesia’s efforts to end fires and palm oil cultivation on peatlands.

If successful the move will undo recent attempts to end deforestation from palm oil production, and exacerbate the risk of future forest fires.

Forests on fire light up the galaxy

Since August, forest and peatland fires have become so widespread across Indonesia that, in satellite images, the nation has looked like an over-lit Christmas tree.

The fires have been so bad that carbon emissions from peatland burning alone (forgetting about the many thousands of additional forest fires) have equalled those produced by the entire United States. 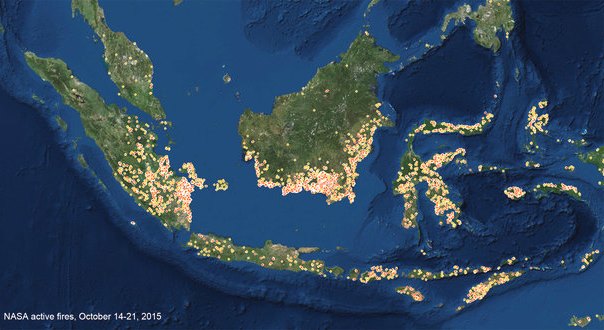 Fires detected in Indonesia during a single week in October. Image: NASA

Schools and airports have been repeatedly closed across large expanses of Southeast Asia. To reduce their risks, residents have been told to stay indoors.

Some 500,000 people have so far suffered respiratory distress. Nearby Singapore has threatened legal action against several Indonesian companies whose activities have been linked to the fires, provoking a serious diplomatic spat between the two nations.

Recent rains have dampened things somewhat. But climatologists tell us the “Godzilla” El Niño that worsened the fires this year will likely continue for several months more.

Banning of peatland fires a glimmer of hope

In the wake of the alarming fire crisis, Indonesian president Joko Widodo recently banned peatland fires and the planting of peatlands with palm oil. 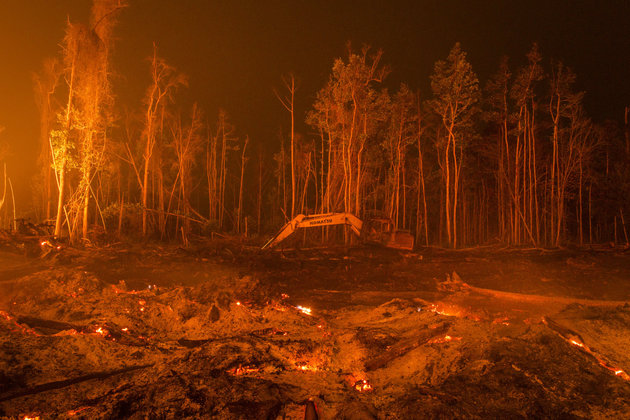 An excavator is seen as peatland forest is cleared by burning for a palm oil plantation at a company’s grounds on November 1, 2015 in the outskirts of Palangkaraya, Central Kalimantan, Indonesia. The air pollution or haze has been an annual problem for the past 18 years in Indonesia. It’s caused by the illegal burning of forest and peat fires on the islands of Sumatra and Borneo to clear new land for the production of pulp, paper and palm oil. Desperate civilians at the epicentre of Indonesia’s haze crisis are taking the fight into their own hands, using whatever meagre resources they have to confront the fires ravaging their communities as they tire of waiting for the government to take action. Image: Ulet Ifansasti/Getty Images

The president must be lauded for this crucial action. Although belated, it’s central to efforts to staunch the present fire crisis and to limit future crises.

But we’re not out of the haze yet.

Between them, Indonesia and Malaysia produce around 85% of the world’s palm oil. Palm oil is intimately linked to forest loss and burning. For example, most of the peatland fires have occurred because deep channels were carved into the peat swamps, so they drain out and become dry and easy to burn.

While oil palm plantations can be established on cleared lands, many legally and illegally involve deforestation, because it allows them to use timber revenues to help offset the costs of plantation establishment.

The destructive impacts of oil palm on rainforests and peatlands is a key reason why palm oil corporations have come under heavy fire in recent years to clean up their environmental acts.

And this has fomented a true revolution. Under growing public and consumer pressure, many of the world’s biggest palm oil producers, as well as many large multinationals (such as Procter & Gamble, Nestlé and Cargill) that buy and use palm oil, have adopted “no-deforestation” agreements. This has all happened in the last two years and it’s been one of the most remarkable environmental advances of the last decade. 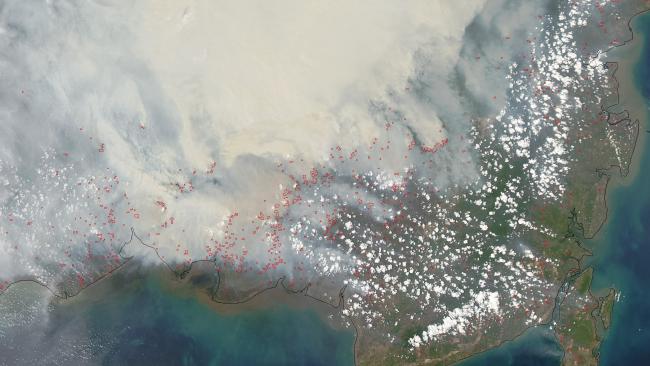 But just as the no-deforestation agreements are starting to yield real benefits, Indonesia and Malaysia are moving actively to destroy them. One of the aims of the new council is to pressure corporations working in their nations to drop their no-deforestation pacts.

They argue that the pledges are an affront to sovereignty, in being driven by Western consumers, and disadvantage smaller palm-oil producers. However the coalition coordinating no-deforestation efforts among Indonesian producers — known as the Indonesia Palm Oil Pledge — is working to help smaller firms and community producers achieve no-deforestation compliance.

In my view, the arguments by Indonesia and Malaysia are just another smokescreen to expand palm oil production.

For instance, Indonesia is planning to convert 14 million hectares of degraded forest to plantations and other resources, which will likely involve deforestation. 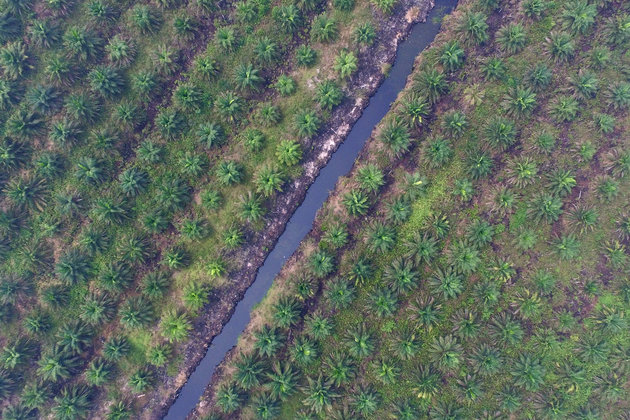 Vegetation grows on a palm oil plantation in this aerial photograph taken in Ogan Komering Ilir, South Sumatra, Indonesia, on Saturday, Oct. 31, 2015. Indonesia’s forest fires have catapulted the southeast Asian nation to the top of the rankings of the world’s worst global warming offenders, with daily emissions exceeding those of China on at least 14 days in the past two months. Image: Dimas Ardian/Bloomberg via Getty Images

The new council also plans to lobby China and India, both massive palm oil consumers who’ve so far shown little interest in anything other than buying large amounts of palm oil as cheaply as possible, to accept its new palm oil scheme.

While the council has promised sustainable palm oil and to limit forest fires, it is unclear how this will be achieved with a massive expansion of the palm oil industry.

The fires and dense haze that have plagued Southeast Asia this year are certainly not a one-off event. In fact, they’ve been an annual occurrence for many years, albeit worsened this year by an intense fire-breathing El Niño drought that we’ve long known was coming.

Indonesia is destroying its rainforests faster than any other tropical nation, and it is at the heart of the recurring air-pollution crisis in Southeast Asia. Its policies will have a huge impact on forests, biodiversity and the global climate. President Widodo’s recent pledge to halt peatland fires is an essential initiative and one that should be heartily applauded. 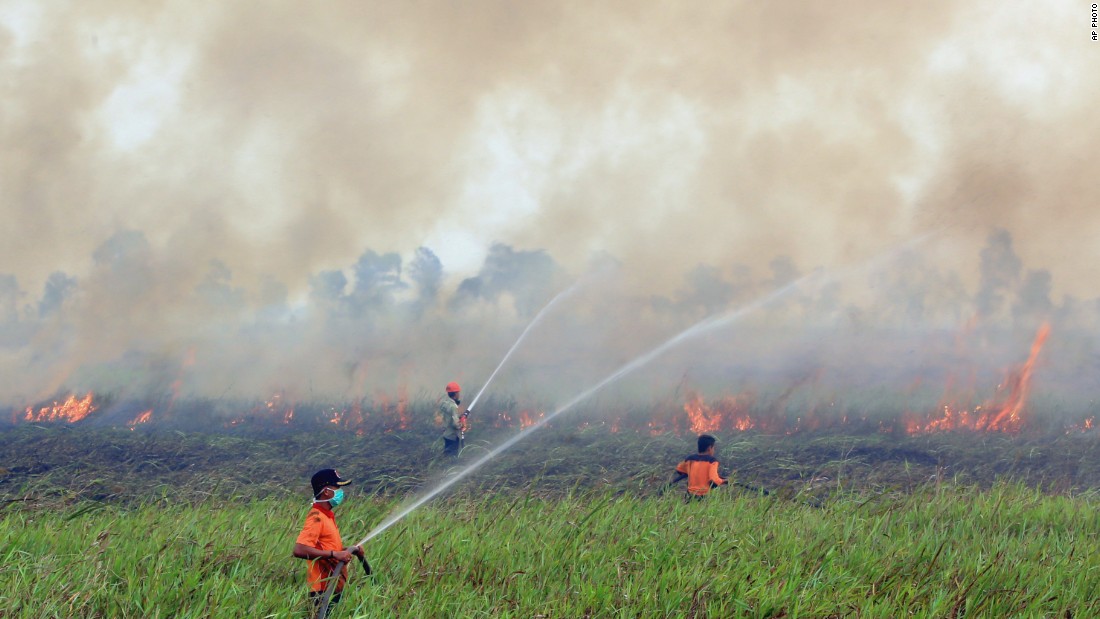 But if the newly formed council holds sway, any benefits from Widodo’s peat-burning ban could be overwhelmed by increasing forest destruction in some of the biologically richest real estate on the planet.

And I predict that any corporation rash enough to backslide on its hard-won no-deforestation pledge will be quickly targeted by environmental groups and, hopefully, punished by consumers.