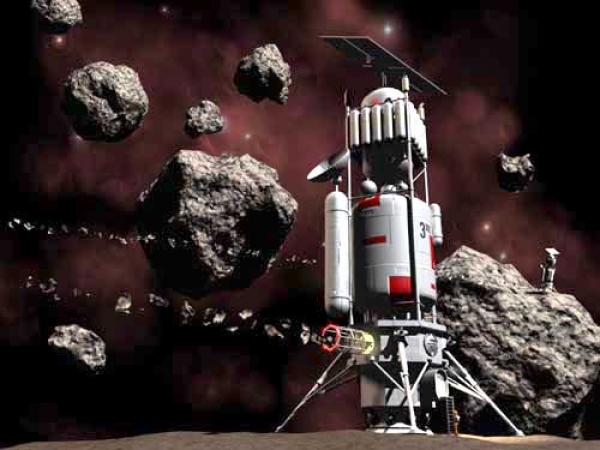 As our planet runs out of minerals and resources to support our even expanding need for development, is asteroid-mining a possible and viable option in the foreseeable future?

Asteroid mining may sound like a science fiction term and it has had some pretty awful notions associated with it. Our imagination and history of the past often makes us picture certain greedy and malevolent individuals, who have gained control of the universe by controlling its mineral supply, consequently making the entire universe a battleground.

But by close speculation of modern society the hope is that- for the most part, people are growing more aware of the effects of economic inequality and environmental conservation. Which, along with breakthroughs in science and technology, should make us less likely to exploit the universe in such an egotistical and greedy manner.

Based on recent population figures, there is a daily increase of 211,467 individuals, and hence there will continue to be a decline in Earth’s natural resources at an unprecedented rate. We need to seek alternative methods in order to save the planet.

Asteroid or astro mining was coined by legendary Russian racketeer Konstantin Tsiolkovsky in 1903. It refers to the prospect of gathering raw materials from asteroids and other minor planets.

Materials that could be extracted include titanium, nickel, iron, gold, zinc and water, which could be used to sustain the lives of astronauts, and hydrogen and oxygen which could be used as rocket fuel. These minerals could either be taken back to Earth or continue to be used in space as construction materials.

It is estimated that a 24-metre-wide metal (M-type) asteroid could hold 33,000 tonnes of extractable metals, including R400 million worth of platinum alone. A 7-metre-diameter (C-type) asteroid can hold 24,000 gallons of water, which would be essential in providing a sustainable ‘space mining’ venture. This water could be used to create rocket fuel, replenish spacefarers and provide oxygen. If you look up 241 Germania, a single asteroid in our solar system, you will see that it has $95.8 (£60) trillion of mineral wealth inside it – nearly the same as the annual GDP of the entire WORLD!

The view from the environment

Although the economical implications of mining seem positive, it can have a negative effect on the environment and possibly even our overall human health.

So how then would asteroid mining provide us with the needed minerals without harming this beautiful planet, the people who inhabit it and the amazing galaxy in which it is? Asteroid mining seems to have an advantage over terrestrial mining (mining on Earth). According to the pro lobby, in the process of mining asteroids there will be no ecosystems which will be damaged, people that will be polluted and beautiful landscapes that will be destroyed, “since asteroids are for all intents and purposes pieces of frozen rocks floating around in space.”

Caltech’s Keck Institute for Space Studies (KISS) recently released a report (PDF) which stated that “given the current pace of technology, we could reel in a 500-tonne asteroid by 2025 at a cost of roughly $2.6 billion.” Astronomical work over the last fifteen years has increased the number of known Near Earth Asteroids from about 30 to about 400.

Companies like Planetary Resources are already spending billions of rands researching this venture. This company was founded specifically for this purpose and is funded by the likes of filmmaker James Cameron and Google billionaires Peter Diamandis and Eric Anderson. The absolute goal of Planetary Resources is to extract resources totaling hundreds of billions of rands annually from near earth asteroids (NEAs).

“Now we finally have the technology to extract resources outside earth for the benefit of humanity, without having to rape and pillage our planet,”’ Peter Diamandis, the co-founder of Planetary Resources.

It must be said that if one wishes to find critical opposition to counter the support for asteroid mining on the internet, one really needs to do some extensive ‘detective work.’ This may be due to the fact that it is a fairly new concept. Or attributed to Planetary Resources’ great marketing campaigns and the widespread influence of their investors.

Peter Theil, American entrepreneur and co-founder of Paypal has expressed opposition towards asteroid mining and Planetary Resources in particular, stating that ‘belief in rapid, even accelerating technological progress is surely going to cause tremendous miss-allocation of capital.’

Joel Marks, professor of philosophy at the University of New Haven, believes that an accident on a NEO (Near-Earth object) could send it on a collision course to Earth, destroying it. It seems most philosophers tend to agree that an abundance of resources is far more likely to generate conflict than a lack of resources.

Although astro-mining opportunities seem immense, we as active members of society must continue to pose several vital questions before we even think of allowing private companies to drill into these highly resourceful asteroids.

Perhaps it is possible  that asteroid mining, when carefully researched, is not just another way for multi-national companies to exploit resources and increase the economic inequality that so pains us today. Instead it could be an expedition which would benefit humanity, by providing us with vital resources, scientific knowledge, environmental sustainability and economic prosperity.