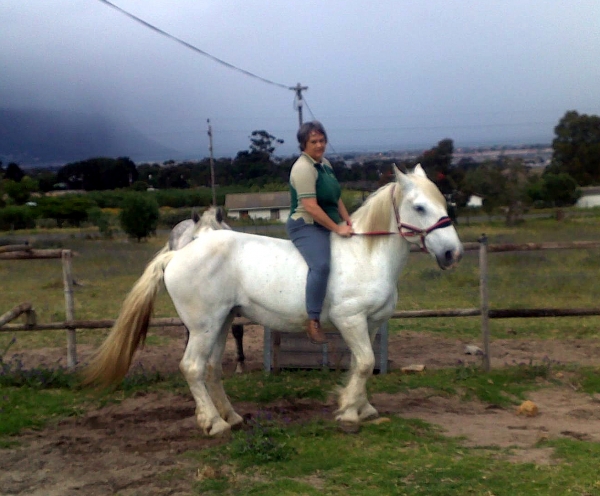 What attracted me to Waterkloof wines, as a horse lover, was that they use horses in their vineyards. I reckoned it was to lower their carbon footprint, but Christiaan Loots, the farm manager, assured me that it was economically motivated.

Waterkloof is situated just outside Somerset West on the old Sir Lowry’s Pass road, about halfway to the village. 32 of the 53 hectares are managed biodynamically. Weeds are not seen as a problem, but as a necessity to keep the very strong winds (up to over 100 km/h) from eroding the soils.

Minimum cultivation is the norm. The horses do most of the weeding. This is called ghropping. They also handle the spraying of soil and leaf preparations. Hardly any pesticides are used. The Percheron horses are from the so-called “cold blood types” with low metabolic rates and they keep their weight easily on only oat hay with no concentrated feed. Thus the up-keep of the horses are more economical than that of tractors with ever-surging diesel prices.

The lowering of the carbon footprint and the much less impact on the soil in the vineyard are very welcome side-effects. Currently there are three horses trained and one youngster still in training. Christiaan trains his own horses. When fully trained, a horse does not need someone to lead it and only one person per horse is required. Just like a tractor? 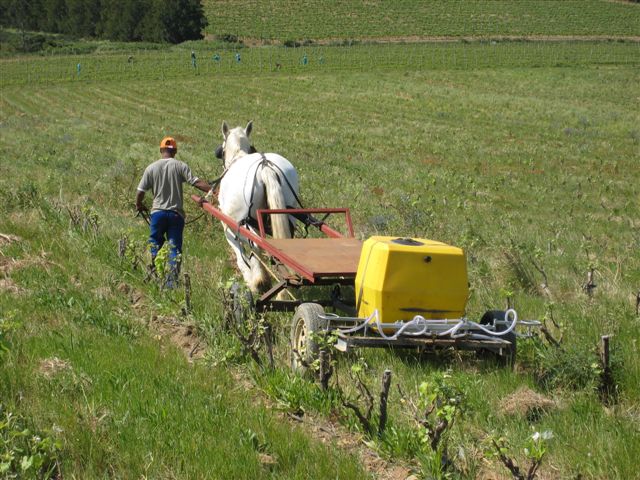 Christiaan envisions 8 fully trained horsed on the farm. He would then like to park his tractor in the shed and only use it as a back-up.   One horse should be able to manage 8 hectares. It takes about 4 months to teach a horse to plough, 2 months to pull the home-built spray tank (with sun panel) and to make them “bomb-proof” so that . they don’t start at sudden a sudden noise or movement. They work at a speed of 4km/hour, exactly the same as the tractors.

In winter time, animals graze in between the vines. He has mobile camps on wheels in which to put the grazing animals (sheep and cattle) so that they do not damage the vines. The dung is used as fertiliser.

The move towards biodynamic practices – like planting and pruning according to the moon calendar – was mainly to try and build the vines. The soil on Waterkloof is fairly fertile, but the winds severely stunt the growth of the vines. After the rain, the wind dries out the soils very quickly. One good thing about the wind is that they don’t have many problems with fungal infections.

Christiaan believes in making his own compost, though not to feed the vines, there are too many of them. He spreads out the compost very thinly only to feed the soil microbes. The compost is made from whatever is available: kitchen refuse, straw, weeds from the gardens and cellar waste. He also uses cowpack manure – manure from a lactating cow, mixed with egg shell and left to compost for 3 months.

The vines do not produce as much as many conventionally managed vineyards, but the berries are high in silicon (thick skins) and the juice is very concentrated. They try not to trail the vines and this leads to the bunches being carried in a circle formation in the bush vines. In this way the sunlight is used optimally and produces the concentrated juice, while all the bunches ripen evenly and get the same amount of nutrients and sunlight.

A big area of the farm consists of Fynbos, adding to the biodiversity initiative. The weeds also add to the biodiversity. Weeds are combated (by ghropping) only after September when it gets drier. The Fynbos is managed by a BEE company. They combat aliens and remove them. The Fynbos harbours natural predators. When the farm was bought, 20ha was badly infested with mealy bugs. After the release of natural predators like ladybirds, the counts went down from 800-900 per block to 20-23 per block.

Christiaan believes that many of the common diseases occur because the diversity in the soil has been disturbed by continuous spraying of pesticides. Thus something like downy mildew will only attack the vine if the soil is not healthy and there are no naturally occurring plants (weeds) on the soil to live on. He is currently experimenting with sour figs as a natural anti-microbial agent. His preliminary results look promising.

A very bad piece of stony soil was “offered up” to vines that were not grafted. The result – 3 tons per ha, where none was expected. Circumstance Rosé tastes great to my untrained pallet…

Another bad compact block was treated with the biodynamic Preparation 500 (basically cow manure buried in a cow horn until totally composted) and within 3 months the difference in the compaction was visible. Christiaan’s reason for biodynamic farming? “This forces one to be much closer to your vines.”

Werner Engelbrecht, Waterkloof’s wine maker took us through the cellar. “We use wood instead of metal for tanks. This causes a problem with hygiene. So we use ozone, hot water and a little bit of sulphur. The easiest way to get good fermenting and maintain hygiene, is to keep the barrels as full as possible.” 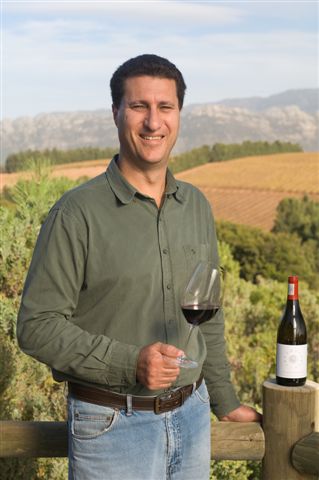 In keeping with the idea of Slow Wine, the grapes are hand-picked, sorted and put in small 15kg cases to prevent bruising. It is cooled down overnight and then lightly pressed as whole bunches. These are then left to drop out naturally. No extra yeast or anything else is added. The whole process is kept as natural as possible. The temperature is also not fiddled with if at all possible. This makes it a very long process – 16 months for red and 10-12 months for white – but it adds character to the wine. “This is how wine used to be produced many years ago,” he says. When asked about his thoughts on biodynamics, he tells us that he has seen the fermentation process acting on moon phases.

And the horses? “Luckily, they are Christiaan’s responsibility!” Werner, who seems to be slightly in awe of these white ‘tractors’ is quick to say.

It seems as if Waterkloof has the best of both worlds – seemingly living in the past, whilst still sucessfully functioning in the current economic climate. Good slow wines, biodiversity, animal traction, wonderful views of False Bay… and did I mention the fastest diet on earth? Christiaan invited me to mount Lady Jane, the alpha mare. I seemed instantly to lose 10 kg, since she is so enormous. Unfortunately the extra kilos instantly reappeared when I dismounted…