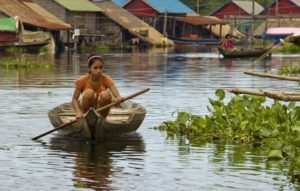 Thirty-nine provinces across the country have been placed on alert for possible natural disasters resulting from torrential rains forecast over the next 24 hours.

Chatchai Promlert, director-general of the Department of Disaster Prevention and Mitigation, said the rain threat comes from a strong monsoon now covering the lower Central, the upper South, the East and the lower Northeast of the country and a low pressure cell over the South China Sea, the Andaman Sea and the Gulf of Thailand.

The 39 provinces should stay on high alert for possible natural disasters such as flooding and landslides that could be triggered by torrential rain, he said.

Meanwhile, deputy Bangkok governor Amorn Kijchawengkul said flash floods occurred in several parts of the capital on Tuesday because of heavy rain measuring over 100 millimetres per hour, that had fallen for at least 15 minutes.

Water drainage capacity in each area of Bangkok was only 60mm per hour, he said. As a result, it took the Bangkok Metropolitan Administration up to three hours to completely drain water from flooded zones, he said.

In the northern province of Nan, the local disaster prevention and mitigation authorities and the military were yesterday providing flood relief supplies to Ban Pa Phae and Ban Huay Liap in Wiang Sa district that were hit by flash floods.

About 20 homes were destroyed in the flood, Nitiwat Nithinanthan, head of the provincial disaster prevention and mitigation office, said.

In Nakhon Ratchasima, the local irrigation office said drought in the province has eased significantly since the start of the rainy season earlier this month.