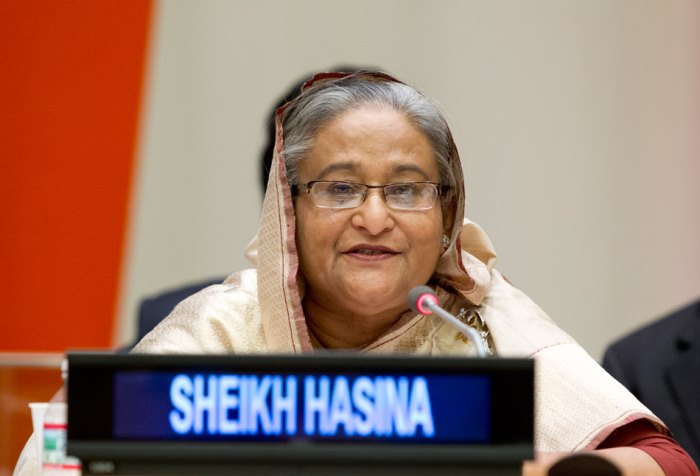 Prime Minister Sheikh Hasina of Bangladesh has been announced as one of the winners of the United Nations Champions of the Earth award in recognition of her country’s initiatives to address climate change.

“Serving as Prime Minister of Bangladesh – one of the world’s least-developed countries – Sheikh Hasina has proven that investing in climate change is conducive to achieving social and economic development,” said the announcement issued by the UN Environment Programme (UNEP), which confers the awards.

UNEP noted that Bangladesh is one of the world’s most populated countries, with over 159 million people. It is also one of the most vulnerable to the impacts of climate change. Cyclones, floods and droughts have long been part of the country’s history, but they have intensified in recent years.

“Through a number of forward-looking policy initiatives and investments, Bangladesh has placed confronting the challenge of climate change at the core of its development,” said UNEP Executive Director Achim Steiner.

“These initiatives, from climate change adaptation measures to ecosystem preservation legislation, mean that current and future generations of Bangladeshis are better prepared to address climate change risks and reverse the impacts of environmental degradation.”

He added that Sheikh Hasina has demonstrated “leadership and vision” in both making climate change an issue of national priority and advocating for an ambitious global response.

“As an early adopter and advocate of climate change adaptation policy, she continues to be an example to follow as world leaders seek to take action on climate change as part of the Sustainable Development Goals and the Paris climate conference in December.”

The award cites, among other initiatives, the progressive Bangladesh Climate Change Strategy and Action Plan of 2009, which made the South Asian nation the first developing country to frame such a coordinated action plan. Bangladesh is also the first country to set up its own Climate Change Trust Fund, supported by nearly $300 million of domestic resources from 2009-2012.

Also noted is the fact that the Government currently earmarks 6 to 7 per cent of its annual budget – some $1 billion – on climate change adaptation, with only 25 per cent of this coming from international donors. In addition, under her leadership, the Bangladesh Constitution was amended in 2011 to include a constitutional directive to the State to protect the environment and natural resources for current and future generations.

“As one of the most disaster-prone countries in the world, Bangladesh understands the importance of addressing the impact of climate change. The country is already experiencing its detrimental effects, and it is often the poorest and marginalised who feel it most,” said Robert Watkins, UN Resident Coordinator in Bangladesh.

One in 7 people will be displaced by climate change

He noted that by 2050 it is estimated that one in every seven people in Bangladesh is likely to be displaced by climate change, and they are also likely to move to urban centres already burdened with meeting the needs of a dense population.

“I congratulate the Government of Bangladesh for being proactive in tackling climate change as a priority of the country. It is also a clarion call for the global community to take action today, and to realise that climate change is not a problem of the future, it is already happening in our lifetime.”

The awards will be handed out at a special ceremony on 27 September in New York at the close of the Sustainable Development Summit. In addition to Sheikh Hasina, the other winners announced so far are the National Geographic Society (Science and Innovation); Brazilian cosmetics firm Natura (Entrepreneurial Vision); and South Africa’s Black Mamba Anti-Poaching Unit (Inspiration and Action).