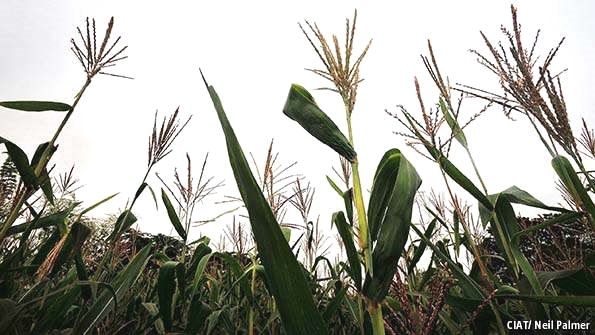 In the early 1970s Asia’s rice farmers faced ruin. The brown planthopper, an insect up till then found mostly in Japan, began to appear across the region. It fed on young plants and transmitted grassy stunt virus, causing crops to shrivel and brown. As it swept through Asia’s paddy fields, yields crashed. By the end of the decade it had caused damage costing over $300m—more than $1 billion in today’s money.

Scientists raced to find a solution. They screened over 6,000 samples of rice and its wild relatives until they found a unique sample from central India of a wild species called Oryza nivara that was resistant to the virus. By crossing it with domesticated rice strains, plant-breeders transferred the resistant genes into a new variety. Today, millions of farmers across Asia grow rice derived from such crosses.

Find your wild ancestors to survive

“Crop wild relatives”—the wild ancestors of cultivated plants—are a valuable weapon in the fight against hunger. Together with varieties used by traditional farmers, they contain a wealth of genetic diversity. Yet they are under-researched and under-collected. With their survival threatened by population growth and environmental damage, the race is on to find them before it is too late.

Climate change is expected to cause higher temperatures and more frequent droughts, changing the distribution of pests and diseases. Population growth will add to the pressure on productive land: the UN expects the number of people in the world to rise from 7.3 billion today to 9.7 billion by 2050. This, together with a switch to more meat-eating, will mean a big increase in the demand for food. The UN Food and Agriculture Organisation (FAO) says humanity will need 70% more food by then.

Dependence on a few staples worsens the consequences of any crop failure. Just 30 crops provide humans with 95% of the energy they get from food, and just five—rice, wheat, maize, millet and sorghum—provide 60%. A single variety of banana—Cavendish—accounts for 95% of exports. A fast-spreading pest or disease could see some widely eaten foodstuffs wiped out.

That makes it even more important to preserve the genetic diversity found in crop wild relatives and traditional varieties as an insurance policy. Alas, much of it has already disappeared. The FAO estimates that 75% of the world’s crop diversity was lost between 1900 and 2000. As farming intensified, commercial growers favoured a few varieties of each species—those that were most productive and easiest to store and ship.

According to Cary Fowler of the Global Crop Diversity Trust, an international organisation based in Germany, in the 1800s American farmers and gardeners grew 7,100 named varieties of apple. Today, at least 6,800 of them are no longer available, and a study in 2009 found that 11 accounted for more than 90% of those sold in America. Just one, “Red Delicious”, a variety with a thick skin that hides bruises, accounts for 37%.

Meanwhile urbanisation, pollution, changing land use and invasive species are threatening the crop wild relatives that survive. A study in 2008 concluded that 16-22% of those related to peanuts, potatoes and cowpeas (a legume grown in semi-arid tropics) will have vanished by 2055 as a result of climate change.

Seed banks are the best hope of preserving those that remain. Dehydrating and freezing seeds means that they can be kept for hundreds, perhaps even thousands, of years, and still sprout when given light and water (as botanists need to do on occasion). Some 7.4m samples are already in seed banks around the world, but huge gaps exist.

As part of a study to be published later this year, Colin Khoury and Nora Castañeda-Álvarez of the International Centre for Tropical Agriculture (CIAT), a research facility in Colombia, studied the state of conservation of more than a thousand crop wild relatives in seed banks. They found that for over 70% there were either too few samples for safety or none at all.

Most seed banks vulnerable, many destroyed

The Millennium Seed Bank (MSB) in Sussex, part of Britain’s Royal Botanic Gardens, is the world’s largest wild-plant seed bank, housing 76,000 samples from more than 36,000 species. It co-ordinates “Adapting Agriculture to Climate Change”, a $50m, ten-year international programme funded by Norway to collect and store wild relatives of 29 important crops, cross them with their domesticated kin and share the results with breeders and farmers. Its freezers are solar-powered and its vault is built to withstand a direct hit by a plane (Gatwick airport is close by). Other seed banks are more vulnerable. Staff at the International Centre for Agricultural Research in the Dry Areas, an institute once based in Syria, now found in Lebanon, shipped 150,000 samples to save them from being damaged in the former country’s civil war; seed banks in Afghanistan and Iraq have been destroyed. The Philippines lost one to fire.

Located in Cali, Colombia’s third-largest city, CIAT is home to more than 300 scientists. It has a mandate from the UN to protect, research and distribute beans and cassava, staple foodstuffs for 900m people around the world. Its seed bank, housed in a former abattoir, contains over 36,000 samples of beans, more than any other seed bank, and varieties developed there feed 30m people in Africa.

For many years CIAT’s researchers concentrated on creating varieties that could cope with poor soils and drought. But they have now turned their attention to heat resistance. Earlier this year they announced that they had found heat resistance in the tepary bean, a hardy cousin of the common bean cultivated since pre-Columbian times in northern Mexico and America’s south-west. Crosses with commonly cultivated beans such as pinto, black and kidney beans show potential to withstand temperatures up to 5°C higher than those common varieties can cope with. Even a lesser increase in heat resistance, of 3°C, would mean beans could continue to be cultivated in almost all parts of central and eastern Africa, says Steve Beebe of CIAT’s bean-breeding programme.

Big agricultural firms are also creating improved crops with the aid of genetic modification. MON863, for example, a maize variety engineered by Monsanto, contains an artificially inserted protein which targets the larvae of the rootworm, a pest which causes around $1 billion of damage each year in America alone. But developing such varieties has been expensive and slow in the past—and the fear of “Frankenstein food” can put consumers off. New varieties produced by crossing crop wild relatives are cheaper and less controversial.

In recent years politicians have stepped up efforts to conserve crop genetic diversity. The International Treaty on Plant Genetic Resources for Food and Agriculture, which came into effect in 2004 and has been signed by 135 countries and the European Union, identifies 35 food crops that are considered so important to global food security and sustainable agriculture that their genetic diversity should be widely shared. But it has worked less well than hoped. In 2013 a group of Norwegian researchers sent letters to 121 countries requesting seeds. Only 44 complied. Communication broke down with 23 and 54 did not even reply.

If a big crop were to fail, a single useful gene lurking in one wild relative could prevent calamity. PwC, an accountancy firm, values the genes derived from the wild relatives of the 29 crops regarded as most important by the MSB at $120 billion. Preserving the genetic diversity that remains would be an excellent investment.